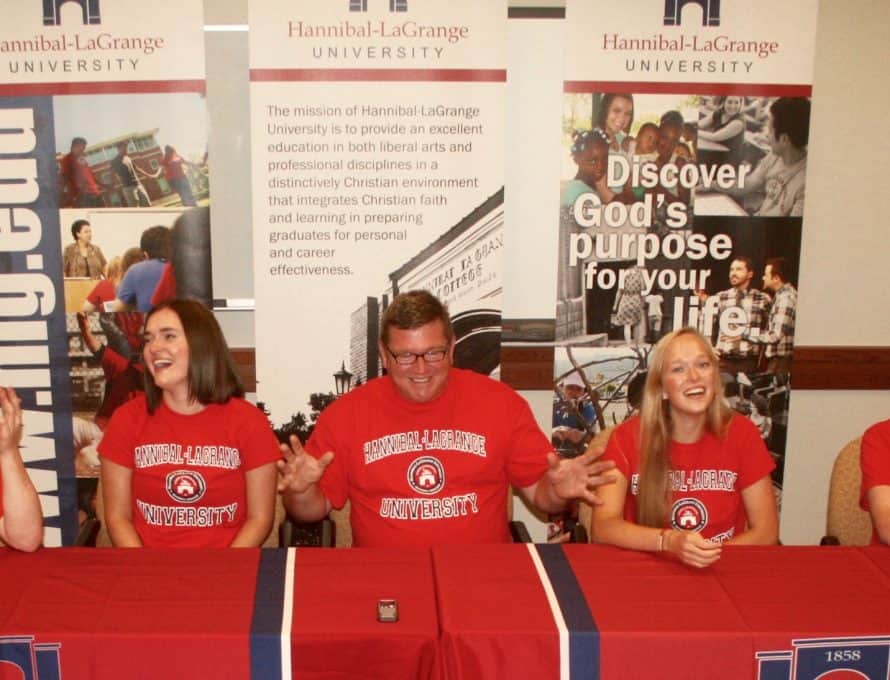 HANNIBAL – Five members of the McCaughey family, including father Kenny (center) and children Nathan, Kelsey, Natalie, and Joel share a light moment before an August 25 press conference where the four of the McCaughey septuplets are enrolled this fall. Pathway photo by Dan Steinbeck

HANNIBAL – In 1997, Kenny and Bobbi McCaughey made history when seven children were born to them, a result of fertility drugs. On August 25, 2016, another chapter of the family began when four of the siblings were among the new students at Hannibal-LaGrange University.

After moving in, Natalie, Kelsey, Nathan, and Joel McCaughey (pronounced ‘McCoy’) and their father Kenny spoke at a press conference. In birth order of the seven, they are numbers three, four, five, and seven. Adding an older sister, they each drop one place in birth order.

The boys, both declared as computer information systems majors, will stay in different dorms on campus.  Kelsey, an undeclared major and Natalie, an early childhood education major will be in the same hall, but not roommates.

In the midst of some outcries in 1997 that the couple should have aborted some of the children, the McCaughey’s staunchly refused, due to their Christian faith. As a result, they gave birth to seven children, who became the world’s first septuplets ever to survive.

The same faith that sustained the family in 1997 is real yet today.

“Eighteen years ago, when we knew this (college) was a possibility, we basically trusted in the Lord. We knew he had a plan. We also had some accounts saved for them, but the scholarships helped them,” Kenny said.

Part of the plan was an invitation from Hannibal-LaGrange to give free tuition to the whole seven, and four of them have taken the college up on the offer.

“Faith isn’t a part of our life, it is our life,” Kenny said.

Natalie spoke for the siblings about faith: “Faith is my life. I take my relationship with Jesus seriously. I want to glorify him and honor him every day I can and tell how great our God is.”

Natalie plans to also run for the HLGU cross country team, and Kelsey, the ‘musical one of the family,’ plans to sing with the campus group “Praise Song.”

The siblings admit they will miss the rest of the family, which includes mother Bobbi, and siblings Brandon who is going into the military, Kenny and Alexis who will be at an Iowa community college, and older sister Mikayla who has already moved out of the house.

Several of the HLGU siblings agreed it would be nice to have some family on campus with them.

Nathan is hoping his campus experience will lead to “being more independent.” Kelsey hopes “to make new friends.” Natalie wants to “make memories.” And Joel wants to start “making his own course.”

Kenny said many times, people say he looks familiar, but don’t remember from where. He then retells the story.

“Some people obviously know who we are,” he said.

The four are anxious to define their own identities, separate from the novelty of being a septuplet, and Kenny is glad they family didn’t become a reality show.

“We’re delighted to have you here. When I became president, I was excited to get the news of the offer to you. This is a wonderful opportunity of your life,” said HLGU president Anthony Allen. “It’s a great education to prepare you for the future in a Christian environment.

Allen said the Hosmer family of Hannibal just this year enrolled their sixth child at the school, but they haven’t all been there at the same time. As far as he knows, there has been no other family with four siblings attending HLGU at the same time.

“Our job is to help them integrate and let their identities develop and prepare them for the future. I’m delighted to see what the Lord will have for them,” Allen said.

Classes began at the school August 30.