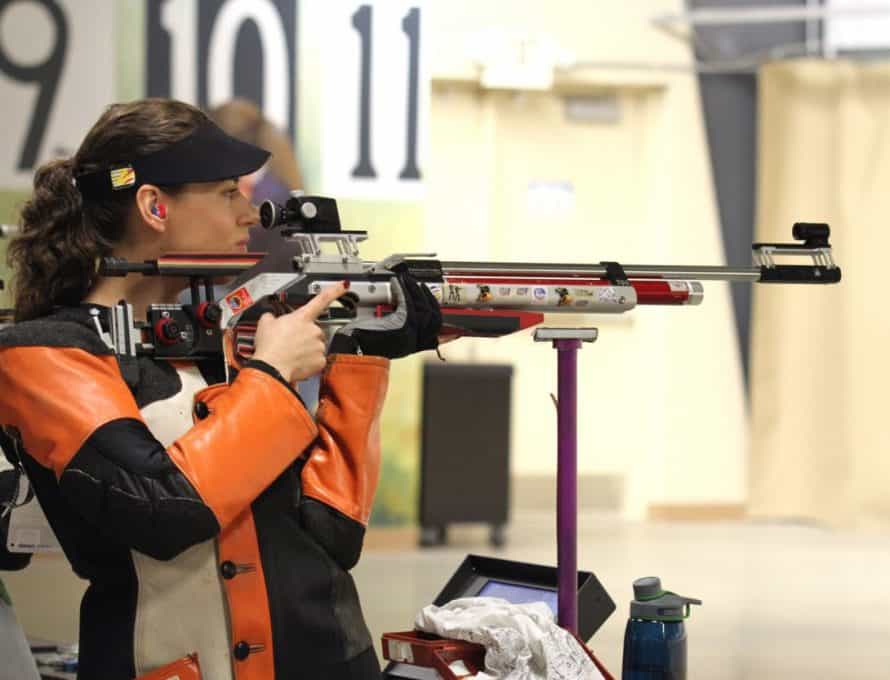 RIO DE JANEIRO (BP) – In Sarah Scherer’s competitions, the slightest movement – even an errant breath – can be the difference between winning and losing.

It’s understandable that such circumstances can cause times of nervousness and tension during a shooting competition. That’s why the Olympic shooter a few months ago decided to start reciting the Lord’s Prayer to herself when the pressure is on.

“I realized I do that in life,” Scherer told Baptist Press. “I might as well do that when I’m competing. Being able to say a prayer that’s a structured prayer is very comforting.”

The 2016 Olympics are a return visit for Scherer, who competed in the women’s 10-meter air rifle competition in London in 2012. This time, in addition to that event, she’s also representing Team USA in the 50-meter rifle three position, in which competitors shoot at a target from kneeling, prone and standing positions.

When she’s competing, Scherer has to summon every ounce of focus and concentration she can to be successful. And she has a time limit. That’s where the Lord’s Prayer comes in – something she knows by heart and can recite quickly without losing mental focus.

“The words are still just as meaningful, and they’re still prayerful,” she said.

That prayer shows Scherer’s reliance upon God, especially the words “thy Kingdom come, thy will be done.” It’s a phrase that Scherer has grown to appreciate over the past several months, especially when it looked like she was going to bid the sport farewell.

A back injury required surgery in September 2014. Though the surgery was successful, Scherer reinjured her back in March 2015, requiring a second surgery. The way her competition schedule was arranged, Scherer thought she had no chance of making the 2016 Olympic team since she didn’t have enough recovery time to compete in the events necessary to earn her Olympic spot.

So Scherer began the process of retiring, which proved difficult emotionally.

“I had to trust that the Lord had a plan and bigger purpose for it,” she said.

But just a couple of weeks before her second surgery, she got a call from her coach informing her that the World Cup schedule had been changed, and another event had been added that would give Scherer the minimum qualifications for the Olympics.

The timeline was tight, but it wasn’t impossible. And sure enough, after recovering from her second surgery, Scherer rehabbed, trained and earned her second Olympic berth.

“God had an amazing plan this whole time,” she said. “No matter what might happen, God is all powerful, and He can change crazy things to make things work out. So you have to trust His purposes.”

Through that journey over the past year, Scherer said the Lord has challenged her to learn more about Him and about His faithfulness. As she prepares to compete in Rio, she’s confident as an athlete. She’s also confident that God will care for her, no matter the circumstances.

“I have goals of how hard I want to work and what type of score I’m expecting and challenging myself with,” Scherer said. “But when it comes down to it, I’m going to trust the Lord in whatever happens as well, whether it’s better or worse.”