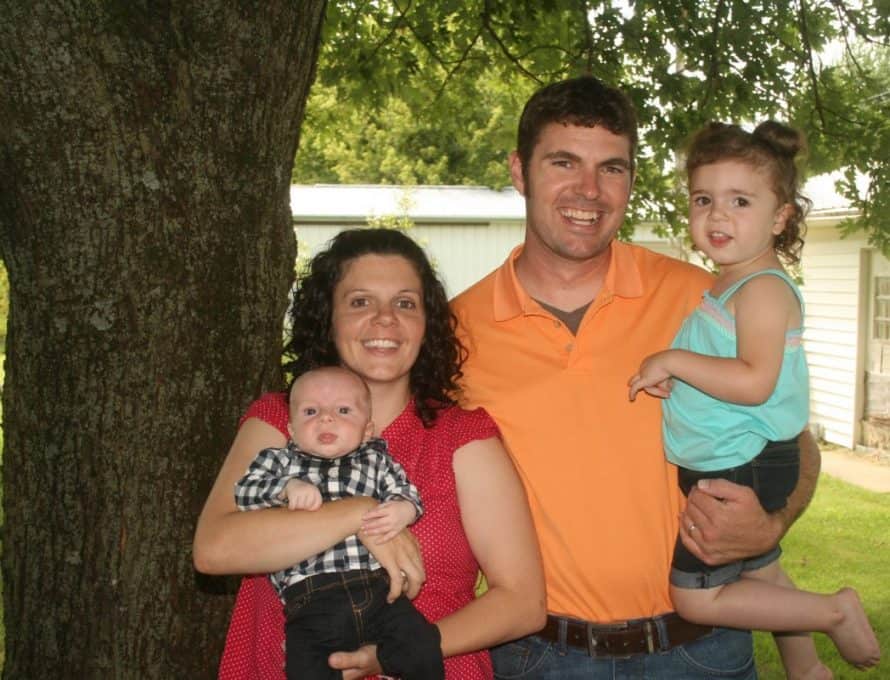 LEWISTOWN – Malachi Kuenzle already has a testimony, but the three-month old doesn’t know it. His family, however, has proclaimed God’s glory in their son’s news.

Chris and Heather Kuenzle, Lewistown, were anxious for Malachi to join two-year old daughter Chloe. A different type of anxiety surfaced when 20 weeks into the pregnancy, Malachi was diagnosed with a kidney issue.

“A hospital in Columbia said tests showed a cyst or something and one of his kidneys was bigger than the other,” Heather recalled.

The couple made monthly trips to Columbia from Lewistown until Malachi was 32 weeks in the pregnancy, and then weekly trips were made. At 39 weeks, Heather’s labor was induced because Malachi had grown enough and doctors wanted to better determine Malachi’s care.

“After he was born, they ran a test that showed both kidneys were swollen,” said Chris Kuenzle, Associate Pastor of Ewing First Baptist and Director of Missions for Mt. Salem Wyaconda Southern Baptist Association.

“Later, they determined one kidney would be okay, but the other might not be salvaged,” Chris said.

There apparently was a kink in the ureter, but another test would need to be done, but not until Malachi was six weeks old.

Chris and Heather switched to Cardinal Glennon hospital in St. Louis and mentally prepared themselves for Malachi needing surgery – to fix the ureter, to repair, or even remove a kidney. They hoped the other kidney would function fine.

“On a scale of one to four, with one being mild and four being severe, his right kidney was a four and his left was a two,” Heather said. “Usually at stage four, the kidney is not working and if it gets below 15 percent functionality, they would have to remove it when he was three months old.”

One hospital called it hydronephrosis – fluid on the kidney

Meanwhile, The Kuenzle’s church and many other churches prayed. Chloe prayed for her yet-to-be born brother. God heard all the prayers.

“At the six week IV and dye test, the radiologist said to ask the doctor, but in his ‘amateur opinion,’ everything seemed to be okay. The doctor came in and said each kidney was doing the necessary 50 percent of the work. I said ‘what does this mean?” The doctor said the kidney was healing on its own,’ Chris said.

“What do we do now?” Chris persisted.  “The doctor said ‘Nothing. We’ll do a follow up in three months.’ I asked  ‘How does this happen?’ and the doctor said he was born with it (kidney condition) and it went away.”

Chris compared his and Heather’s reaction to the miracle of the disciples praying in Acts 12 for Peter’s prison release and then being astonished when it happened.

“We didn’t know how to react. We planned on this changing our life for a while with doctor visits and surgery,” Chris said.

The Kuenzle’s reality came the next Sunday, when Chris, who preached the previous week on James 5, on praying for healing, told the Ewing church.

“I felt I was getting emotional and prayed that I would hold it together. I realized that was a selfish prayer, and God wasn’t going to give me that request. I heard Heather behind me crying, and the praise team crying, and saw the congregation sobbing. I lost it,” he said.

On the third month to the day after Malachi’s birth (July 18),  – a time doctors had foreseen surgery – no surgeries had been done or planned. Malachi’s next check-up will be September 8, but both kidneys are functioning as normal, output is normal, and Malachi has no pain.

“We didn’t despair when we heard the first news about his kidneys. We pray to the Father who knew what it was like for his Son to suffer,” Chris said. “Malachi’s name means ‘messenger’. Before he was born we were praying God would use him to amaze people and God would be glorified in his healing.

“He has a message, and he’s not yet able to speak.”