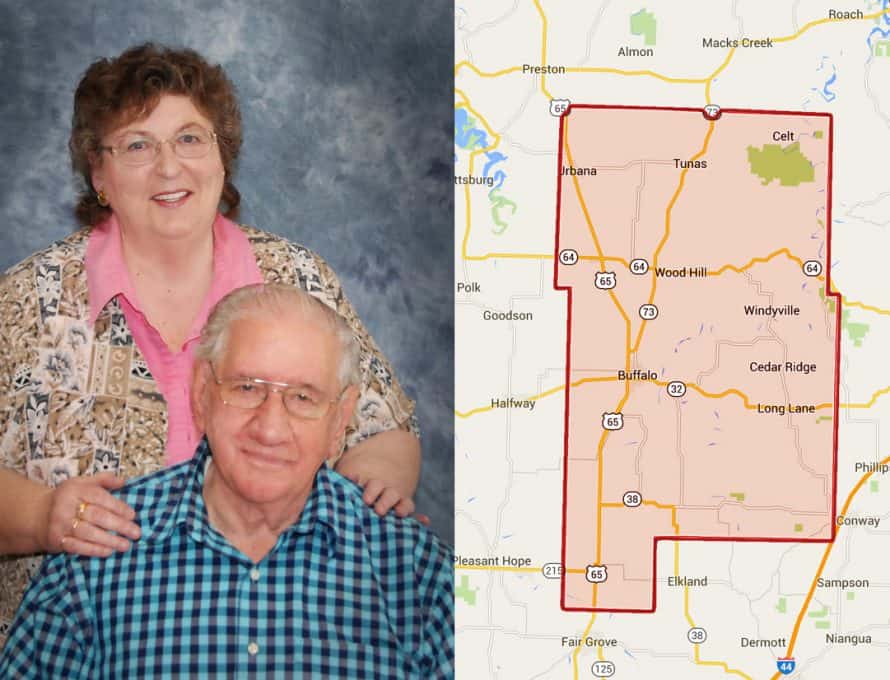 DALLAS COUNTY – Age doesn’t stop the Dallas County DOM from serving. Some people are amazed that Russell Adams is still in active ministry at age 90. Perhaps no one is more surprised than Adams himself.

Adams is Director of Missions for the Dallas County Association of Southern Baptists, and he oversees its 14 churches.

“It’s a mystery to me. The doctor said ‘according to your (health) tests, there is no reason you shouldn’t feel good. I have no plans to retire unless the Lord says so. I’d like to preach the day the Lord comes,” Adams said.

His only medicines are twice-daily blood pressure pills. Six days a week he still walks at least 15 minutes.

“Part of what I do is visit with people on my walks,” he said.

Adams grew up the youngest of 10 children to Garden City, Oklahoma “truck farmers,” where various types of produce was trucked and sold in Tulsa.

While still in grade school, Adams family moved to Clarence, Missouri to help family operate a gas station and restaurant business. He helped pump gas before enlisting in the army engineers in 1944, and took basic training at Camp Wolter in Texas.

While in the Army, a brother Lawrence, serving in the Navy died in an accident off the coast of California when he got caught in a mooring line and drug overboard. Russell Adams returned home for emergency leave, and later was deployed to Manila, Philippines.

Adams re-enlisted and was sent to Seoul in the Korean War, and ended his military service in 1950.

In 1951, he married Marcella Williams who played a role in Adams becoming a Christian.

“She began going to church, in Southern Illinois. I stayed home. Working second shift at Fisher Body of General Motors was a good excuse. I made rear doors for Chevrolets and Pontiacs,” Adams said.

Marcella’s church began praying for Adams, and she left a tract ‘what must I do to be saved?’ on his chair. Eventually he began attending church, and within a few months made the decision to receive Christ in 1960 at age 35.

“I’ve had peace ever since. I was happy just being church treasurer, but one year later I answered the call to preach. I still believe in the same call.”

Adams said his DOM recommended then Hannibal-LaGrange College. He and Marcella tried unsuccessfully to have children, so took in a foster child and eventually adopted two other children. Adams baptized the children.

He pastored Woodlawn church, 18 miles from Hannibal. He also pastored a number of other Missouri churches at Ewing, Grant City,

In their 25th year of marriage, she was diagnosed, and later died from cancer. When Marcella died, he and Harmony Heights in Joplin where he was serving prayed for a new helpmate. Adams said the church ministered to him in great ways, including

God provided a widow, Susie Kinslow. They married in January, 1979. She brought her adopted son into the home.

Adams said the church ministered to him in great ways, including picking up the children from school until Susie got home from work.

“She has been a great asset to me,” Adams said, adding that she has authored one book and other writings, and has been featured at ladies conferences.

Adams, who still drives, said he mows the lawn, and Susie takes care of the flowers on their six-acre property. Their home houses the Dallas County Association of Southern Baptists and it allowed them to offer around-the-clock care for Susie’s ailing mother for eight years.

Adams has also pastored at Mack’s Creek and Northeast Baptist in Missouri, an Oklahoma church, and for 10 years in California state.

“After I retired, I was pastor at Fair Play (Missouri). I came to Buffalo in 2000. They wanted someone to supply preach. I was recommended by (the late) Otis Devine, who told me to try it  (DOM) for three years, then five, then until I was 80.”

Adams did and has surpassed all those milestones. He still leads Wednesday morning Bible study and fills the pulpit. All 14 churches in the association have pastors. He conducted a revival in Phillipsburg in October 2015, and still visited Susie daily who thenhad a 40-day hospital stay in Bolivar even during the revival.

He is also a hospice chaplain.

“The Lord has been good to me.”

(EDITOR’S NOTE: This article includes reporting by Steve Johnson of The Buffalo Reflex.)