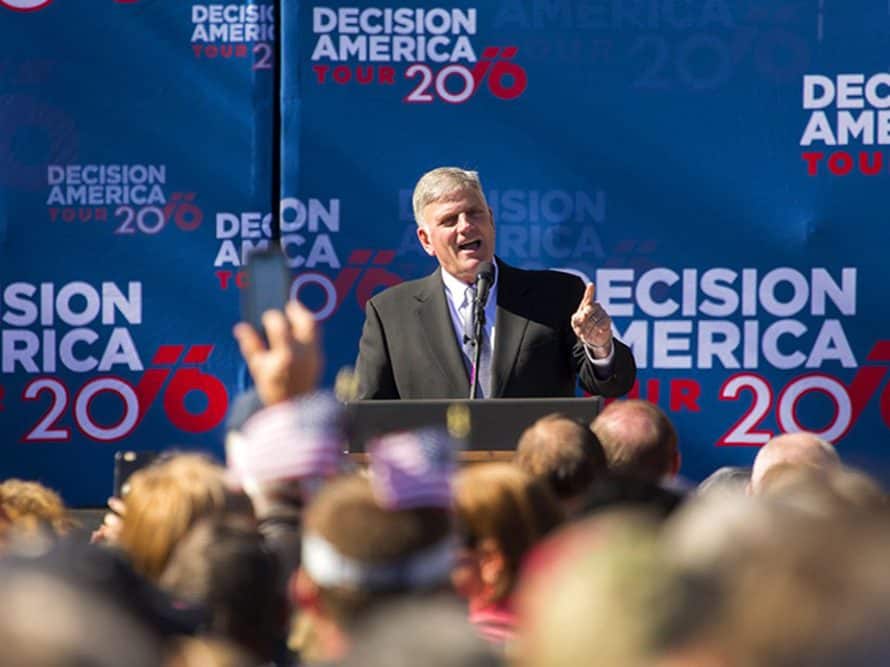 JEFFERSON CITY – Final preparations are being made at the State Capitol in anticipation of one of the largest gatherings ever at the site when Franklin Graham brings his Decision America Tour here May 17 at noon.

Graham’s visit to Missouri’s capital marks his 23rd stop in his tour to all 50 state capitals. In each he is holding prayer rallies for the nation in preparation of national elections in August and November. His most recent stop was May 5 in Charleston, West Va.

“I’m going to every state in our country to challenge Christians to live out their faith at home, in public and at the ballot box,” Graham said on the Decision America website.

At each prayer rally, he is also sharing the gospel, and so far, more than 2,300 people have made decisions for Christ, according to the Billy Graham Evangelistic Association. Graham is the son of the famed evangelist Billy Graham.

Parking is expected to be a problem around the State Capitol. Those bringing buses and vans may unload their passengers on the north side of the State Capitol. Attendees will have to walk around the building to its south lawn where the one-hour rally will be held. Bus drivers will need to park their vehicles in the parking lot of Jefferson City’s Capitol Mall about six miles west of downtown (on Highway 50 West toward Sedalia at the Truman Boulevard exit). Drivers must stay with their buses.

Vans and cars may park at Concord Baptist Church (3724 W. Truman Blvd.) or at the First Assembly of God (1900 State Highway C). Shuttles will be available at both locations to carry attendees to the State Capitol for the rally and then return them to their vans or cars once it is completed.

Finding downtown parking will be a challenge. All downtown street parking is metered ($2.00 of quarters for two hours). There is one parking garage at 200 Madison Street that charges $.25 an hour to $2 for event parking.

Attendees are urged to bring yard chairs and rain gear, since there will be no seating and no alternative site in the event of rain.

Previous Graham rallies have drawn upwards of 9,000 people and a similar number is expected to attend the Missouri rally. Graham’s next stop after Jefferson City is Lincoln, Neb., on May 18. His tour will conclude with his 50th stop – in Raleigh, N.C., — on Oct. 13.

Following the rally, attendees are invited to attend a 30-minute prayer service for our nation on the third floor Rotunda of the State Capitol. Candidates running for statewide office will be introduced and tables will be set up where people can register to vote. Free food and water will be available as will the candidates to visit with those attending.