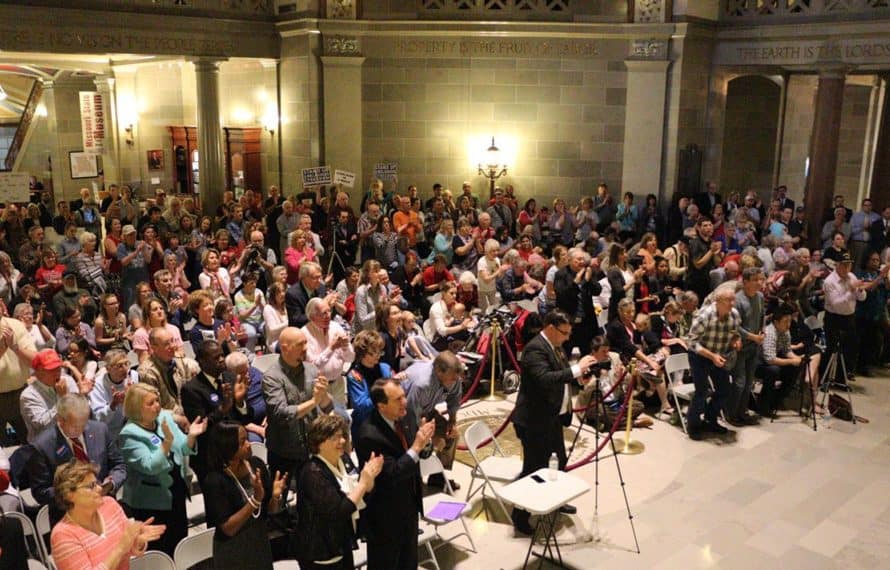 JEFFERSON CITY – More than 400 people attended an April 19 rally in The Rotunda of the State Capitol in support of SJR 39. Pathway photo by Kenny McCune.

JEFFERSON CITY – Supporters of the Missouri Religious Freedom Amendment, Senate Joint Resolution (SJR) 39, vowed to keep fighting for religious freedom for all Missourians after a House of Representatives’ committee killed the measure April 27.

SJR 39, which passed the Senate on a 23-7 vote in March, died a slow death in the House, where it languished for almost a month before the Emerging Issues Committee voted 6-6 on the bill, thus killing it for this session. Three Republicans – Reps. Caleb Rowden of Columbia, Anne Zerr of St Charles County and Jim Hansen of Frankfort – voted with three liberal Democrats (including the only homosexual in the General Assembly Rep. Mike Colona of St. Louis) in voting against SJR 39.

“What you witnessed here today was a reflection of what Missourians are really all about,” Colona said after the vote.

Pathway Editor Don Hinkle was one of the leaders of a statewide coalition that crafted SJR 39 and worked for its passage.

“SJR 39 failed this time because of a lack of leadership on the part of Speaker of the House Todd Richardson and a handful of mostly termed-out, arrogant lawmakers who denied the people of Missouri a chance to vote on the issue, caving to the demands of demagogues and economic extortionists. Freedom was dealt a blow,” he said.

Hinkle asked Richardson at the last minute to move SJR 39 out of the Emerging Issues Committee to another. Richardson refused, saying he was “committed to the process.”

“The Speaker chose process over policy and the religious freedom-loving people of Missouri are the big losers as usual,” Hinkle said.

SJR 39 proponents pushed the measure in response to last year’s U.S. Supreme Court ruling redefining marriage. They pointed to lawsuits all over the nation against wedding-related businesses like florists and bakers who are being sued or fined by state bureaucrats because they do not want to go against their faith by participating and endorsing a same-sex “marriage.”

SJR 39 would have prevented the state of Missouri from penalizing clergy, churches, religious institutions (children’s homes, universities and schools) and a small number of businesses in the wedding industry because of their opposition to same-sex “marriage.” If it had passed the House, it would have been placed on a statewide ballot in either August or November for Missouri voters to approve.

Supporters often characterized SJR 39 as “a shield, not a sword,” pointing out that it did not prevent same-sex couples from getting a license, “marrying,” or obtaining goods and services needed for a wedding.

Opponents of SJR 39 were caught off guard and stunned when the measure gained quick passage in the Senate. But before the House began considering the measure, the homosexual lobby and some major corporations in the state – led by the Missouri Chamber of Commerce – banned together and began criticizing the amendment as discriminatory.

“We’re still waiting for them to show us where it discriminates,” Hinkle said. “It’s pure demagoguery.”

It did not stop there.

A group of law professors from the University of Missouri-Kansas City, Washington University, the University of Missouri-St. Louis and St. Louis University outrageously claimed that SJR 39’s wording could provide legal protections in criminal proceedings, such as trespassing, assault and even murder. Gov. Jay Nixon referred to SJR 39 as the “Westboro Baptist amendment.” Democrat State Sen. Maria Chappelle-Nadal compared her senate colleagues who voted for SJR 39 to the Klu Klux Klan, tweeting a picture of a Klan meeting with a sign that said, “Jesus saves.”

SJR 39 was the product of a coalition of faith leaders, legal scholars, attorneys, lawmakers and conservative groups from around the state. Among the attorneys who crafted SJR 39: Carl Esbeck, professor emeritus, University of Missouri Law School and considered one of the nation’s top First Amendment scholars; Eddie Greim, an attorney with the Graves Garrett law firm in Kansas City; Joshua Hawley, constitutional law professor at the University of Missouri Law School; Jonathon Whitehead, a Lee’s Summit attorney, and Mike Whitehead, a Lee’s Summit attorney and general counsel for the Missouri Baptist Convention.

Mike Whitehead wasted no time in responding to the legal accusations made by opponents to SJR 39.

“The lawyers hired to object to SJR 39 were like liberal theologians who accuse the Bible of advocating slavery and child murder,” he said. “They were absurd distortions of the truth.

“Critics of SJR 39 say current religious liberty law is enough — while a 70-year-old Southern Baptist grandma is being sued out of her floral business in Washington state.  Opponents support that result.  Fair-minded Missourians think that is intolerable and will find a way to vote on this, even if it takes a citizen initiative campaign next year.  Missouri Baptists will not rest until there is real religious liberty for all.”

Business elites like Monsanto, Dow Chemical and Burns & McDonnell joined organizations like the Kansas City Sports Commission in opposing SJR 39, claiming it would trigger an economic disaster for Missouri if passed.

“They offered no evidence to support their dire economic prediction, while we offered substantial evidence to refute it,” Hinkle said. One example was Illinois, which has a significant number of pro-homosexual protection laws on the books and its economy is among the worst in the nation. Conversely, Texas has very few such laws and its economy is booming.

Kathy Nelson, president of the Kansas City Sports Commission, claimed that if SJR 39 passed that the NCAA and Big 12 basketball tournaments might not return to Kansas City, costing the city up to $60 million in revenue.

Of course neither the NCAA or the Big 12 ever said they were not coming to Kansas City, Hinkle said. “The Kansas City Sports Commission created an illusion and the media played along. It was all smoke,” Hinkle said. A reporter from National Public Radio asked about Nelson’s estimated loss for the city. Hinkle replied: “How much is your freedom worth?”

Not all businesses opposed SJR 39. It was endorsed by the Missouri Farm Bureau and Bott Radio Network. Conservative organizations like Missouri Concerned Women for America, Missouri Eagle Forum, Missouri Alliance for Freedom and the Washington, D.C.-based 1st Amendment Center supported the amendment as did leaders of the Southern Baptist Convention and the Assemblies of God. The Missouri Catholic Conference issued a statement of support, but did nothing to help gain passage.

“I am deeply disappointed that Missourians will not have the opportunity to vote on protecting religious freedom,” said Sen. Bob Onder of Lake St. Louis, who sponsored SJR 39.

Hinkle praised Onder for his courage and leadership, calling him a “statesmen, patriot” and “rising star” on Missouri’s political scene.

Hinkle also thanked Paul Curtman of Union who carried SJR 39 in the House. “He did everything he could do and we owe Paul our deepest gratitude.”

Curtman, a former Marine and the son of a Southern Baptist pastor, said protecting religious liberty is a fundamental characteristic of our identity as Americans.

“Although (the) vote is a setback, the principles of personal freedom and true tolerance are ideas that have traditionally allowed our economy and society to prosper and I’m confident that the people of Missouri will continue to expect our government to protect these principles for generations to come,” Curtman said.

Ryan Johnson, president of the conservative nonprofit Missouri Alliance for Freedom and part of the coalition pushing for passage of SJR 39, criticized the three Republicans who voted against it.

“It is unfortunate that Republican representatives who typically campaign as conservatives refused to govern that way in (the) House Emerging Issues Committee. Their votes to defeat religious liberty in spite of its overwhelming support by Missourians are a slap in the face to Missouri voters. Hopefully voters will remember.”