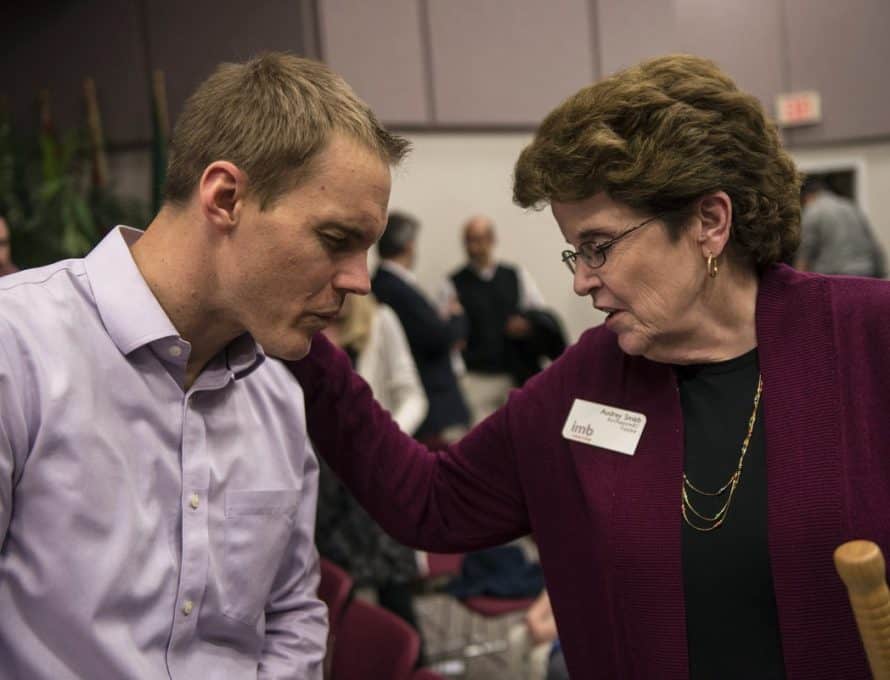 RICHMOND, Va. – IMB trustee Audrey Smith (right) from the Northwest pauses to pray for IMB President David Platt following the missionary appointment service Feb. 23 in Richmond. The service celebrated 26 new missionaries who will be sent out to share the gospel around the world. During the IMB trustee meeting, IMB President David Platt also announced that 1,132 people participated in the IMB’s voluntary retirement and resignation programs. BP Photo by Warren F. Johnson.

RICHMOND, Va. (BP) – Following an “organizational reset” that saw more than 1,100 International Mission Board personnel transition away from the board, President David Platt told a March 3 live stream audience he is ready to focus on the future.

“I really want to shift the conversation from talking about numbers and finances to talking about how this army of brothers and sisters going out specifically from Southern Baptist churches across North America can make the Gospel known among the nations,” Platt told an online audience that included viewers on more than 1,000 electronic devices.

Platt acknowledged “there has been and continues to be in the IMB family … and the broader SBC family a kind of grieving process” associated with seeing hundreds of missionaries and stateside staff shift to other ministry fields. Southern Baptists are “continually wrestling through” implications of that transition even as they focus on fulfilling the Great Commission going forward.

In an hour-long livestream event that included viewer questions submitted via Twitter, Platt listed five “primary desires” that drive the IMB in its ongoing work:

– A desire to exalt Christ

– A desire to mobilize ordinary Christians

– A desire to serve and equip local churches

– A desire to facilitate church planting

– A desire for the 46,000-plus Southern Baptist churches to each play their part in accomplishing the Great Commission.

The SBC’s program of international missions, Platt said, can be envisioned as a “three-legged stool” whose legs represent missionaries, local churches and the IMB. Local churches send and continually encourage missionaries while the IMB leads those missionaries to play specific roles in a coordinated global strategy to evangelize the world’s 6,000 unreached people groups.

But believers take the Gospel even to lands where terrorists oppose it, he said, “because there was a day when all of us were totally opposed to the glory or our God. We were running from Him in rebellion against Him, and He came running after us. In His mercy, God pursued us to the sacrifice of His only Son.

“So now it just makes sense for all those who are hidden in Him … to go to the most radically rebellious against the Gospel and to proclaim it in the grace and the love of Christ, knowing it will cost us, but believing it will be totally worth it,” Platt said.