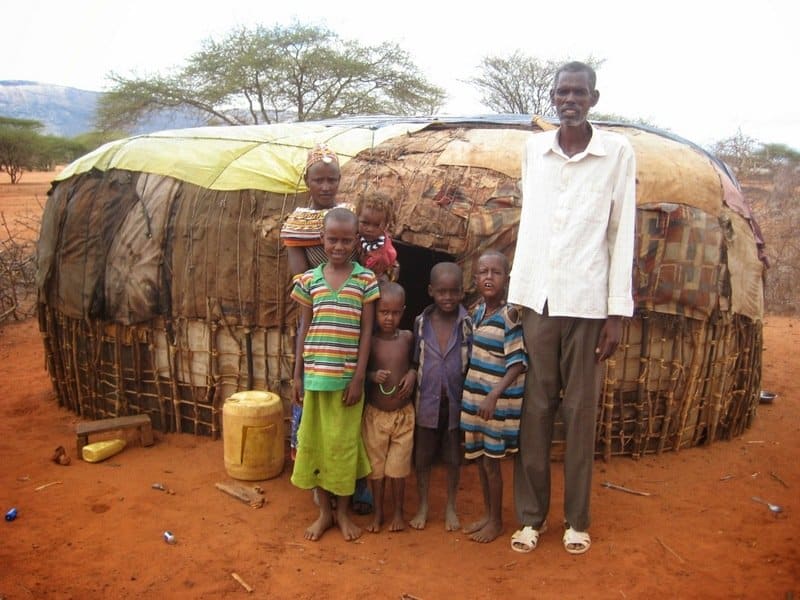 EAST AFRICA – Pastor Stephen and his family stand outside their hut here. Stephen is the pastor of The Living Water Baptist Church, the first of five churches planted among this East African unreached people group with the help of Norfleet Baptist Church, a Missouri Baptist congregation from Kansas City. Photo courtesy of Scott Flippin.

KANSAS CITY – In the fall of 2013, five members from Norfleet Baptist Church here set out to East Africa in their first effort to reach a people group thirsty for the living water of the gospel. Since that time church members have reached hundreds of people and have helped to plant five churches. When they return this fall, they expect to witness 200 baptisms.

“It’s a Gideon thing for us to do this,” said Scott Flippin, pastor of the small congregation in Southeast Kansas City. With roughly 65 people in attendance on a weekly basis, he said Norfleet Baptist is an aging congregation that has had trouble building bridges to reach people in their own community. This hasn’t been for lack of effort since, on a weekly basis, church members go into their community to knock on doors and share the message of Christ.

But a lack of response hasn’t discouraged the church from following a principle derived from Henry Blackaby’s Experiencing God, as paraphrased by Flippin: “Let’s go see where God is working and jump in on it.”

As a result, this small Kansas City church has become a part of an East African church planting effort that is reaching hundreds of people.

During their first trek to the area, Norfleet Pastor Flippin and his wife, Becky, as well as church members Tim and Sandy Choplin and Shirley Parsons, loaded into four-wheel drive Land Cruisers, driving 10-20 miles “off the pavement” and roughing it in East Africa’s—both physically and spiritually—dry and thirsty land.

In the arid conditions, of course, the team had no running water and couldn’t shower. They endured heat both night and day. A temperature of 90 degrees was not unusual after dark, which was enough to keep these Missourians awake—not to mention the cackles and howls of hyenas surrounding their camp, kept out only by a briar fence.

Yet this was worth it for the opportunity to share the gospel with this people group, who had rarely—if ever—heard the gospel message. After Pastor Flippin first gained a passion to reach these people a few years ago, one missionary shared with him that he was the only Christian in the world—besides the missionary himself—who cared about bringing the living water to these spiritually dry people.

Flippin’s own passion for reaching this people group was ignited when in 2011 Tom Elliff, then president of the International Mission Board (IMB), challenged churches to embrace the unengaged, unreached people groups (UUPGs) of the world. The IMB defines UUPGs as people groups that, on the one hand, have a number of evangelical Christians equaling less than 2 percent of the group’s total population. As such, the group is unreached. On the other hand, UUPGs are also unengaged, meaning that no consistent evangelical church planting efforts have been started in the region.

Such lostness was a stark reality for the East African people group that Norfleet Baptist embraced.

“These people rejected Islam hundreds of years ago,” Flippin said. But, rather than embracing a Christianity that they had at some point been exposed to, they clung to an animistic folk religion—mixing in various elements of Islam and Christianity along the way.

“Their culture is a mess,” Flippin said. “Our hope is that we can change that culture.”

But God, in His wisdom, didn’t leave this people group without religious imagery that would help them to understand the gospel message. According to Flippin, they have a sacrificial system. After sacrificing a young lamb, the father from each family will dip his finger in the blood of the lamb and place a mark on his family members’ foreheads in the shape of a cross.

Using such parallels to build a bridge for the gospel, Norfleet Baptist’s first mission team to the area “shared Bible stories from sun up to sun down,” explaining to the people how Christ had come to save them and quench their spiritual thirst.

Within a year 584 people had professed faith. The Norfleet Baptist church built a baptistery in the desert, and Pastor Flippin had the opportunity to baptize 99 of these converts in one trip.

Alongside helping to plant four other churches in the region since that time, Norfleet Baptist has also helped to construct a building used not only for worship, but also for training pastors and church planters who then disperse to make disciples throughout the area.

Flippin said they hope also to start a school for this people group. The nearest school is a Catholic institution and is often too expensive for these people—especially, Flippin noted, since they exchange livestock, not cash.

Flippin said his congregation has shown “substantial support” for the work in East Africa. For example, after hearing that one East African pastor was forced to walk roughly 12 miles to meet with his congregation, one elderly Norfleet Baptist member immediately wrote a check for $1,200—the amount of money needed to buy the pastor a motorcycle.

Looking at how Norfleet Baptist’s efforts in East Africa have flourished, Flippin came to one simple conclusion.