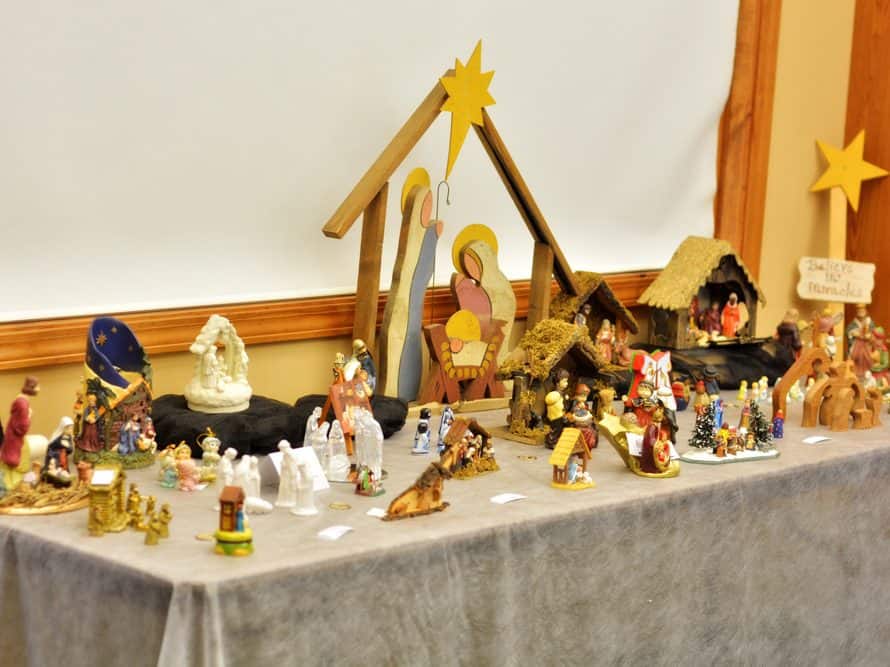 HANNIBAL – Beverly Sileven left a Christmas legacy for the people of Hannibal after her death in November, when her family distributed more than 600 Christmas nativity sets, which she had collected throughout her life, to mourners at her funeral, as well as to at-risk children who needed Christmas gifts for their families. Photo courtesy of Sileven family.

HANNIBAL – Beverly Sileven was known as a giving person who loved Christmas and patriotism. This Christmas, she gave away the bulk of her huge nativity set collection – posthumously.

Actually, her family opted to give away Mrs. Sileven’s sets just before she died of brain cancer, Nov. 15, at age 76.

“Her love language was giving money and gifts. She liked to make and give away crafty things,” said daughter Larinee Dennis, a Hannibal-LaGrange University employee. “She always spent time at the church or with family.”

“People said you could call her at the church and she’d always take time to talk and listen. Sometimes she’d call her husband to help fix a leak  or something (for the caller),” her husband Larry said. “Her husband didn’t always like that.”

Sileven said Bev – the Calvary Baptist, Hannibal church secretary for 35 years – started collecting nativity sets about 50 years ago, but when the couple moved to Hannibal the collection grew tremendously.

“Everyone knew she collected them and everyone got her one when they went on a trip,” he said.

The sets represented about 15 foreign countries. There were nativity sets of Native American Indians,  “fun ones,” according to daughter Michelle Todd, another HLGU employee, including a Veggie Tales one, a snowman one, a corn cob one, a bird nativity set, one of moose, possibly from Yellowstone, and one of pewter on a small decorative rock about the size of a nickel.

Twice before all the sets were publicly displayed.

Todd set them up at a 2006 open house in her home. In 2009, they were publicly displayed for about a month in a vacant building that was property of the Mark Twain Cave, and viewed then by over 600 community visitors.

At the visitation and the funeral, all 640 sets – minus those requested by family members and the nativity lapel pin buried with Beverly – were again unpacked and displayed in the Calvary Baptist lobby, along with red, white, and blue banners, and her desk complete with office items (and a bowl of jelly beans, which she also loved, so people could take a handful). They could also leave with a nativity set.

“Prior to her death, we wondered what we would do with all of them. I thought people like to have things to remember someone. I pitched the idea to my sisters and my dad and they all agreed,” Dennis said.

“The suggestion came forth as a need to get rid of them out of my garage. What more meaningful way was there to get rid of 600 manger scenes. It turned into a very honoring, joyful event,” Sileven said.

“It became an honoring thing. We had a memorial service and they got a memorial to take with them,” Todd said.

With the family busy greeting some 800 people at the visitation and funeral, a family friend photographed who received each nativity for future reference. Volunteers repacked the sets, matching numbers with original boxes as possible.

Over 460 of the manger scenes were given to well wishers between the Friday, Nov. 20 visitation, the Saturday funeral, and Sunday church services. Some of those with new cherished nativities posted social media pictures of them, which Beverly’s family has enjoyed.

Since then, more were given away. Some went to another nativity set collector. On Dec. 2, some were offered for at risk kids “shopping” for a gift manger scene for their family.

“A lot of these are unchurched kids,” said Todd. “We will have zero left”

Bev Sileven had actually told her husband once she wasn’t sure she would even want a funeral.

“She would have been honored, except she wouldn’t have wanted the attention,” Larry Sileven said.

The giving of the sets perpetuates Beverly Sileven’s legacy.

“They (people receiving a set) will take care of it. It will be a special opportunity for it to live a long time,” Todd said.