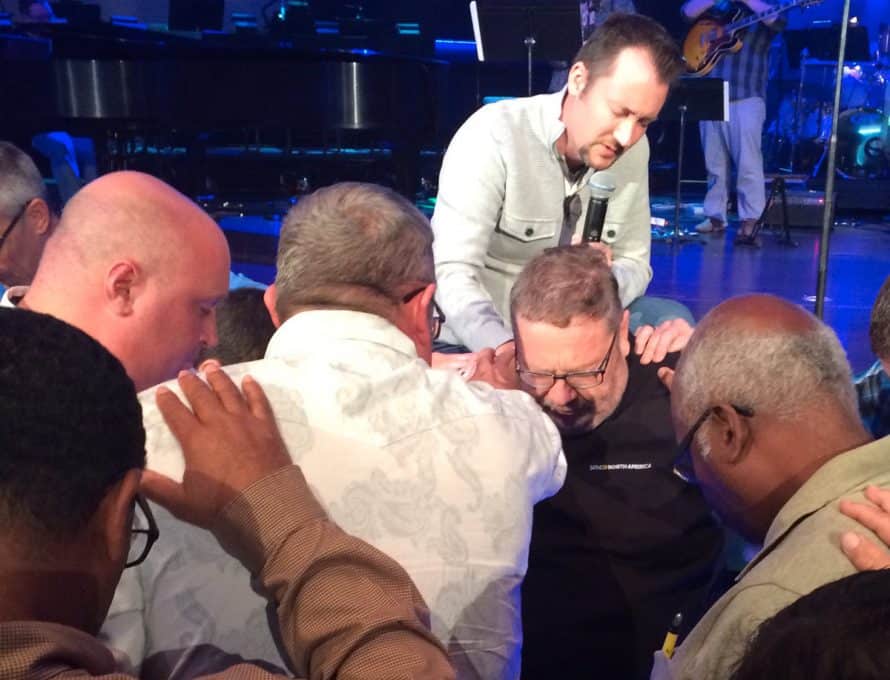 RAYTOWN – Missouri Baptists cried out to God for the salvation of people across Kansas City during a TenTwo prayer conference hosted by First Baptist Church here, Oct. 2.

The event, collaborating with the North American Mission Board’s (NAMB) national TenTwo initiative, was based on Christ’s statement in Luke 10:2: “And he said to them, ‘The harvest is plentiful but the laborers are few. Therefore pray earnestly to the Lord of the harvest to send out laborers into His harvest.”

During the event, Missouri Baptists joined together to pray for revival, for church planting and revitalization efforts, for Missouri Baptist and associational work in Kansas City, and for the unreached people groups living in the region.

“Evangelism in Missouri is greatly needed,” Mark Snowden, evangelism/discipleship strategist for the Missouri Baptist Convention (MBC), told those gathered to prayer. “Out of our population of 6 million, 4.5 million are not born again, and over half of those are in Kansas City and St. Louis. My prayer is that churches (across the state) would begin partnering at a whole new level (in Kansas City), … and together we would be able to see how the Holy Spirit would be able to work.”

Gary Frost, who served until recently as NAMB’s vice president for the Midwest Region, opened the prayer conference. He said that, in order to reach the city, God must raise up laborers who have “His heart for the lost.”

“There is a difference between sympathy and compassion,” Frost said. “Sympathy says, ‘I’m sorry you’re hurt.’ It says, ‘I hurt with you.’ But compassion says, ‘I’ll stick around till the hurt is gone.’ We need some compassion in folk. The lostness in Kansas City is the kind that doesn’t just give way to you passing out a tract and hoping they read it and get saved. We’ve got to have the heart of Christ. We’ve got to have the real, genuine, agape love of Jesus Christ in our hearts if we’re going to make the kind of difference that is so desperately needed.”

Malachi O’Brien, associate pastor for prayer and church revitalization at First Baptist Raytown, said he hopes that this TenTwo prayer conference is only the first of many gatherings in which Missouri Baptists would lift up the people of Kansas City before God in prayer.

The Northeast is known as a rough part of town. Its buildings are run down, the streets are narrow and full of potholes, and crime is common. It