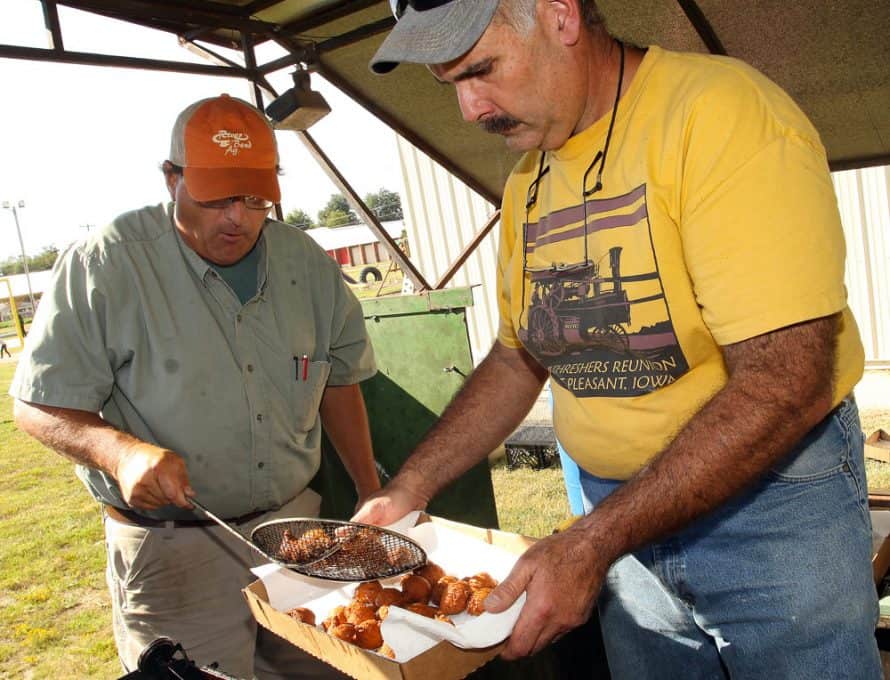 CHARLESTON – Dale Ross (on left) and Joe Stephens (on right) prepare to serve hush puppies during a fish fry held at Shining Light here. 400 people were served fish and all the trimmings on Saturday afternoon. The fish was donated by Housman Fish Market here. Pathway photo by Bob Greenlee.

SPRINGFIELD – Just before his ascension, Jesus charged his disciples to minister in the immediate area, the far edges of the earth, and everywhere in between. South Haven Baptist in Springfield has taken the charge to heart.

“One of the things we adopted a few years ago was an Acts 1:8 strategy. My heart and the heart of the church is to take the gospel where the gospel isn’t. That’s really our main focus,” said pastor Ryan Palmer.

For South Haven’s ‘Jerusalem,’ member Kathy Meyer said church ministries include lunches for teachers and staff or feeding parents, back to school bashes, and a weekly children’s bible lesson.

“Red Star is a regrouping church near Cape Girardeau. In a few weeks we’ll help them with the Southeast Missouri Fair. It used to be a church of about 800 people, and now is down to about 100,” Meyer said.

At Red Star, South Haven helped with six weekday camps, a sports camp and a breakfast. At least three people made professions of faith, and there are regular baptisms.

“We brought resources. Now they do kid’s programs at camp. The Red Star people are very involved,” Meyer said.

South Haven’s Samaria is more northerly. For three years, some of the church has gone to help TriPointe, a coffee-house Baptist church in Papillion, Nebraska, and two of those have been to minister during a two-hour parade.

“We engage people in spiritual conversations. One came to Christ this year, and we have several prospects. Last years there were 16 who came to Christ,” Meyer said.

They distributed some 1,600 tracts and children’s leaflets, about 60 New Testaments, 200 of the Gideon book for youth, “The Life Book,” and 180 TriPointe plastic cups with an invitation to the church. They also offered a discount for a smoothie.

“Our people helped several people put up one man’s awning, and Sunday he was in the worship service. He said he was there because ‘you showed me the love of Jesus.’ It surprised me the first year how open the people (in Papillion are), and it’s why I went back a second year. Only one or two people didn’t want us to pray for them,” Meyer said.

For South Haven, the ‘ends of the earth’ are in western Africa, where they are partnering with other Missouri Baptist work in two Muslim villages.

“We tell people about Jesus. They are hungry to hear. In one village of cultural Muslims, they have 23 believers. In another one, there are three believers in a devout Muslim are. They really have the toughest time. There is a difference between cultural and devout Muslims.

“In one village, one believer owned a motorcycle repair shop, but Muslims started two other shops and ran a road through his business. His family struggles. He has to work out of town,” Meyer said.

We reach areas where there is not a gospel presence,” Palmer said. “It may be an unreached area, or there is or was no church in the community. The Red Star community is changing. The Omaha area wasn’t being well represented by the gospel.”