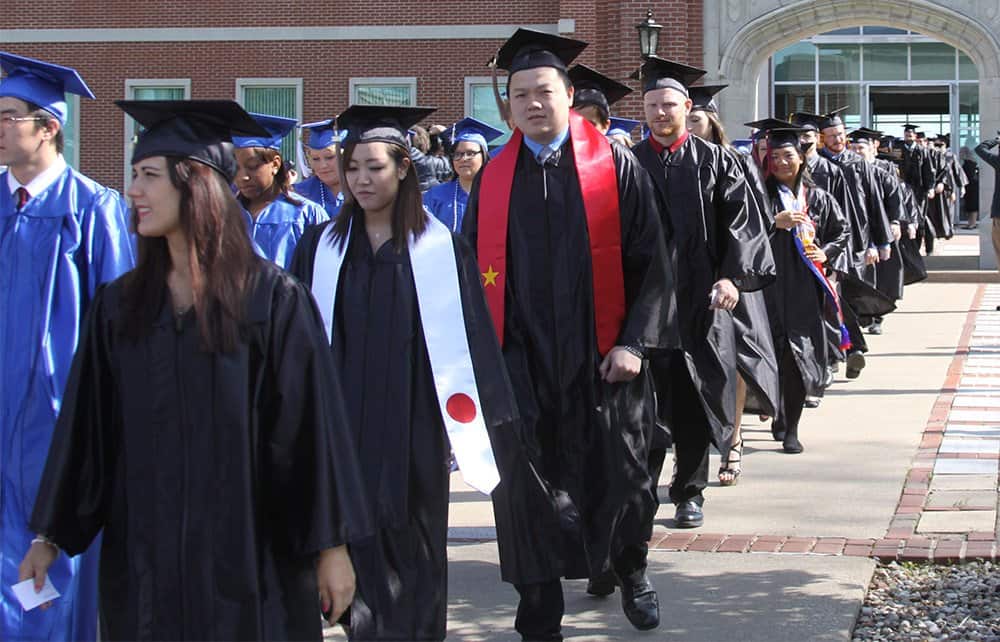 Hannibal – Beautiful weather reflected the bright spirits of almost 300 graduates as they walked across the stage in ceremonial regalia to shake the hand of Hannibal-LaGrange University’s (HLGU) President Anthony Allen and receive their diplomas on May 3.

Allen was once again the speaker for the ceremony and his message to the graduates centered on Prov. 3:1-8 and their uncertainty of what the future may hold for them.

“In these moments of uncertainty, God’s charge to us is the same as it was to Joshua, ‘be strong and of good courage,’ so you can face the future with great confidence,” he said.

Allen encouraged the students to follow the Lord’s path so they can be confident in their future. “Whatever He holds for your future, whether fair weather, or whether you bask in the sun, or if it be storms, may you bend with the wind, because the future belongs to those who can make the right adjustments.”

“So today I congratulate you,” he continued, “and I charge you in the sight of God and all who are here to live your life fully trusting God’s plan, seeking His council, following His path, and accepting His promise, ‘For I know the plans I have for you,’ declares the Lord, ‘plans to prosper you and not to harm you, plans to give you hope and a future’” (Jer. 29:11).

Following the presentation of graduates, Alicia Andres Arroyo and Cole Peck, nominated Who’s Who Among Seniors at HLGU, led the graduates in the graduate pledge and in giving a standing ovation to thank all friends and family for their support.

Also at commencement, the Parkway Distinguished Professor Award was presented to Mark S. Quintanilla. The award is given by Parkway Baptist Church in St. Louis and selection is based on outstanding professional and personal contributions to Christian education. Quintanilla has devoted 10 years of full-time service to HLGU where he serves as professor of history. In 2012, Quintanilla became HLGU’s first Fulbright scholar. As a Fulbright scholar, he served as visiting professor at two different academic institutions in the West Indies. In the process, he became the United States Government’s first Fulbright scholar to be sent to the islands of St. Vincent and Dominica. While there, Quintanilla worked with college and government officials to preserve legal documents dating back to the 1700s and 1800s.

In addition, HLGU also honors one staff member each year. The staff member of the year has been awarded since 2010 and includes nominations by fellow staff members with a vote of affirmation by the administration. This year the award went to Cindy Hammock. Hammock has been a staff member of HLGU since 2007. In her position of accounts payable clerk in the business office, she has performed the task of handling requisitions and keeping accounts accurate. Hammock has been a member of Calvary Baptist Church for 24 years where she ministers to both high school and college students.

Special music during the ceremony was presented by graduating music education major Nicole Seers and Nathan Hammock. The two performed a duet entitled The Prayer and were accompanied on piano by Karen Meade.