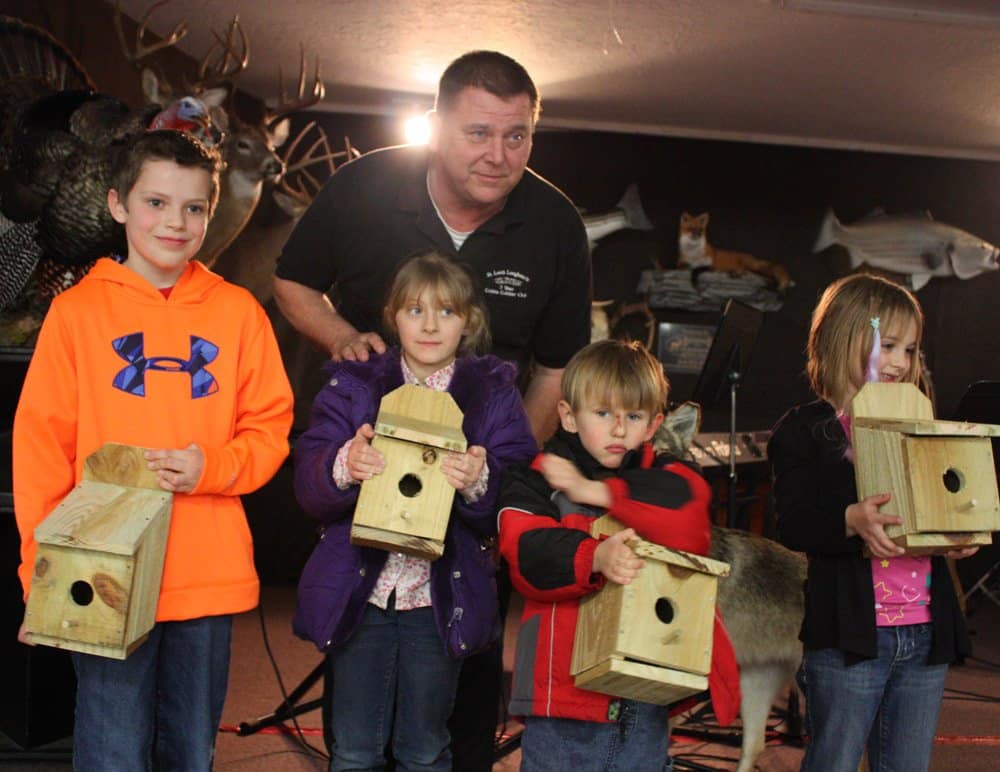 OAKVILLE – Members and visitors to the First Baptist Church (FBC) of Oakville went wild for the menu at the church’s fifth annual Pioneer Harvest Dinner and Exhibit, Jan. 24. During the dinner, the church served guests with wild appetizers, such as duck rolls and bacon-wrapped venison, as well as entrees of wild turkey, venison stew and chili, pheasant, dove, duck, goose, fish and bison. As they ate, guests could look at wild game exhibits of deer, coyote, turkey and fish.

Guests were also entertained by the sound of bluegrass, country and gospel music, performed by The Pioneer Harvesters – a music group composed of members from the church’s Holy Ghost Praise Band. Band members included Tim Schellhase on guitar and vocals, Ernie Downs on bass and vocals, Darryl Clayman on the drums, Nicole Kovaluk on the fiddle and John Gorse Jr. on the piano and vocals.

Mitch Norris of the St. Louis Chapter World Turkey Federation also showed children how to build birdhouses. Each child was able to take a birdhouse home.

The Pioneer Harvest Dinner was established at the church five years ago, when deacon John Gorse envisioned it as a way “to provide a family-friendly outreach ministry to the sportsman, conservationist and the Oakville community.” The event has been a success ever since.

“The church’s main dining and exhibit hall has been sold out and filled to capacity virtually each year,” Gorse said. On average, 250 guests and workers have attended the dinner each year. Of these, more than half do not attend the church regularly. Many come from different faith backgrounds or are unchurched. In fact, Gorse said that the Pioneer Harvest Dinner Committee includes people “of different faiths” from outside of the church who “feel strongly in supporting the ministry.”

The dinner, Gorse added, “is a team effort, from young to old, that work together to provide a most unique experience and dinner for the guests.” Church members donated most of the entrees for the dinner, a kitchen crew began to organize the donations of meat more than three months before the dinner, and a team of cooks began meal preparation one week before the dinner. Additionally, youth from the church served in various roles, whether as waiters or as members of the security and parking detail.

“It has been a great outreach,” Gorse said, “to the Oakville community and beyond.”

In the aftermath of the reversal of Roe v. Wade, the Missouri Baptist Children’s Home is standing firm in its efforts to give help, hope and healing to parents and children in crisis situations