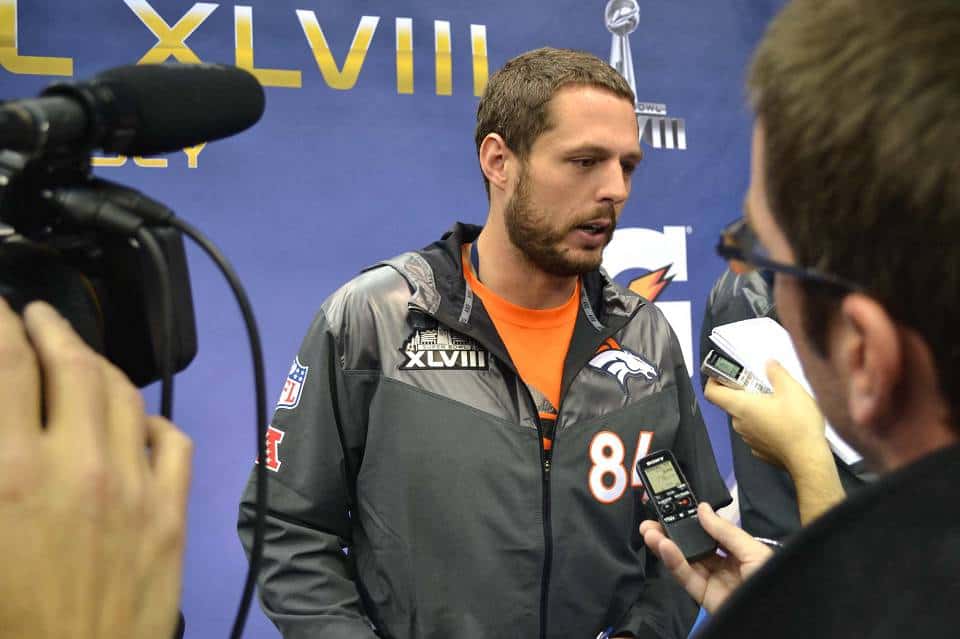 NEWARK, N.J. (BP) – Jacob Tamme is used to intense competition. He’s taken hard hits on the football field in games and in practice during his six years in the NFL. But when his wife Allison was diagnosed with thyroid cancer last year, the Denver Bronco said he was forced to rely on his Christian faith more than ever.

Tamme, who caught a touchdown pass in the Broncos’ win against the Patriots in the AFC Championship, said his team’s Super Bowl run this season has been the opportunity of a lifetime. But he said his relationship with Jesus has helped him overcome. Now one year after his wife was first diagnosed with cancer, the backup tight end reflected on how his faith has sustained him and his family. After successful surgery and treatment, Allison is a cancer survivor.

“My faith has been key,” Tamme said Jan. 28 as reporters gathered around him and other players at the Prudential Center in Newark, N.J., for media day during Super Bowl week.

Tamme, who played in his second Super Bowl – his first was in 2010 when the Colts lost to the New Orleans Saints – said his faith also has strengthened him through challenges on the football field.

In his second season as a Bronco, Tamme has been called on at key moments to fill in for Pro Bowl player Julius Thomas, who struggled with a knee injury this season. Tamme scored another touchdown earlier in the season against the Patriots.

“We’ve gone through a lot as a team this year,” Tamme said. “From all sorts of things … to [Coach John Fox] being out, to losing players to injury. I think the great teams are the ones that can do what we’ve done and overcome those things … really come together as a team and support each other.”

Having a tight-knit group of fellow believers who lean on prayer has helped, the former standout from the University of Kentucky said.

“We have a lot of guys on the [Broncos] that are men of faith and guys who pray together and believe that there is power in that,” Tamme said. “We have a good group, a solid foundation as a team.”

One teammate who Tamme pointed out as a spiritual leader is quarterback Peyton Manning. While Manning is known for keeping conversations with the media on football, Tamme described him as a solid example of how a player should handle himself on and off the field.

“Peyton as a leader is as good as it gets,” he said. “He leads in a way that not a lot of guys are able to do. Having him in the locker room is pretty big. … I don’t know how often he has or hasn’t expressed [his Christianity] but yeah, he is certainly a man of faith.”

In the 2001 book Manning, the Bronco quarterback gave a rare glimpse of his faith.

“My faith has been number one since I was 13,” Manning wrote. “… Some players get more vocal about it … and some point to Heaven after scoring a touchdown and praise God after games. I have no problem with that. But I don’t do it, and don’t think it makes me any less a Christian. I just want my actions to speak louder.