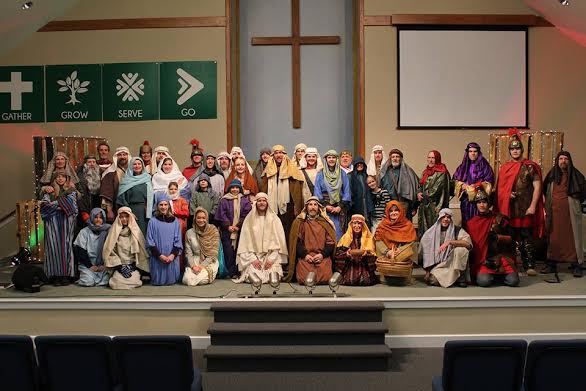 WASHINGTON – Faith Baptist Church performed drive-through nativity, Dec. 12-15. Every year, the community of Washington comes out to see The Living Christmas Story, reaching up to 1,000 people in this town of 13,000.

“This is the ministry that people look forward to every year, and it crosses the denominational line,” Fred Broome, pastor of Faith Baptist said. This was the sixth year Faith has put on the Living Christmas Story, and it involved 80 volunteers from the church.

When guests arrived, it was the goal of Faith Baptist volunteers to get the line of cars moving as quickly and smoothly as possible. Each car was first greeted by a Roman soldier, who would give the driver a “census.” This “census” was a short survey asking for a name, phone number, e-mail, and size of the party in the vehicle. As the drive began, another soldier collected the “census,” while the prophet Isaiah walked around proclaiming the good news, as recorded in Isaiah 9. Then, guests saw a scene with the wise men. The next scene was a market place, where guests received a DVD and a cookie. As the journey continued, they approached the manger scene, Jesus preaching his Sermon on the Mount, His calming of the storm, the cross, and the empty tomb. As actors finished the scene with the empty tomb, they went to each car and shared the gospel. This Living Christmas Story covered Jesus’ life from beginning to end.

Broome has been guiding his congregation to learn what it means to be mission-minded. Their ultimate goal was to win others to Christ by taking advantage of technology and staying on the front line of the community.

He added that, each year, the church strives to improve upon their unique drive-through Christmas experience. This year, they put an emphasis on technology. The DVD that guests received was an example of how they are utilizing technology for the gospel. The DVD includes a two minute promo about Faith Baptist Church.

“People will come around the building but not in, so we want them to see our people and who faith is,” Broome said. A QR code was located on the front of the DVD cover, so that people could scan code with their phones and immediately access the church’s website to watch the video. The video gave people a taste of Faith Baptist’s worship, preaching, nursery, small groups, and included a message from the pastor.

If any other churches desire to do a drive-through Christmas program, the scripts, props and whatever else anyone may need is available from Faith Baptist, Broome added. He said that he would love to help if it means furthering the Kingdom.

For Faith Baptist, the Living Christmas Story was about loving their community and sharing the gospel by any means necessary. It is a small testament to the lives that are being radically transformed through Jesus Christ in this small community.

Sundays have always been a