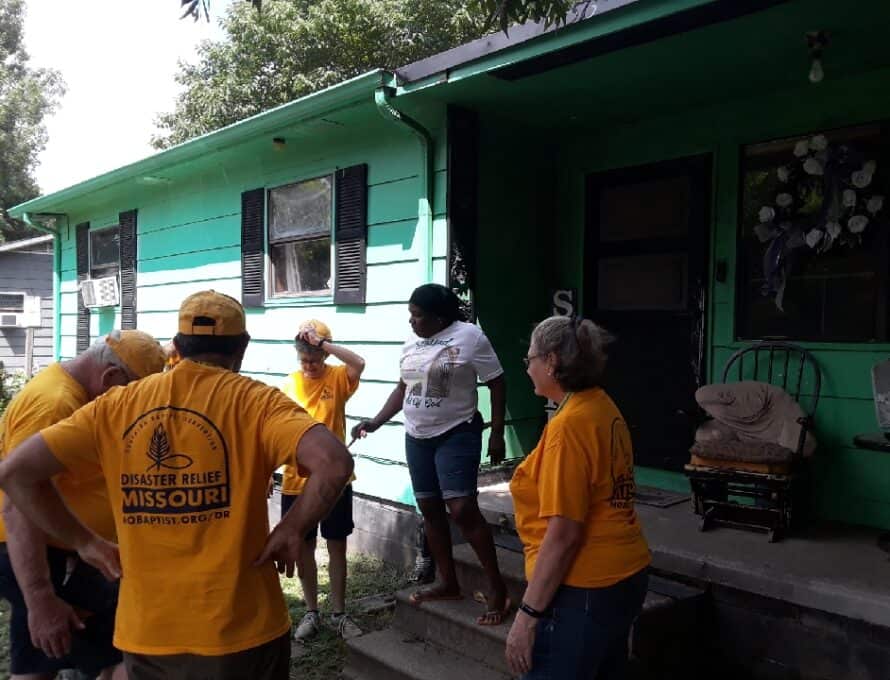 HAYTI HEIGHTS – Missouri Disaster Relief workers speak with a resident their helping here, whose property was damaged during an EF4 tornado on Dec. 21, 2021. (Missouri DR photo)

HAYTI HEIGHTS – On the evening of Dec. 12, 2021, a devastating EF4 tornado ripped through the small Bootheel town of Hayti Heights in southern Missouri’s Pemiscot County. The giant wedge tornado began its destruction in Jonesboro, Ark. and made its way more than 260 miles to western Kentucky.

Although much of its path scoured wide open fields, the December tornado did leave survivors reeling in Hayti with damages to their homes. Tom Malott, whose primary job with MODR is to oversee one of its chainsaw crews, offered to travel to the community to see what work needed to be done.

Malott described differences in the types of disaster responses. The proposed job in Hayti Heights was to be one of the first “rebuilds” a MODR team would take on.

“We are learning that a response that is eight to nine months after a disaster is so different than one from day one, four or seven,” he said. “But it doesn’t matter. It’s a small event population-wise, but their world is still turned upside-down.”

Malott said when teams respond immediately, the disaster is fresh on everyone’s mind. The community and volunteers are sometimes more apt to respond when it has only been days or weeks following a disaster.

Malott said a team of seven, four women and three men, began their work on the home of Henrietta Stokes the first week of August. Her house sustained window damage and water damage in the December tornado event.

“We were attempting to be a blessing for her,” said Malott. “This tornado was the only disaster that mattered to them. Even though only four homes were affected in Hayti Heights, it doesn’t matter. It was devastating to them.”

It took a total of five days to replace all the windows in the 1,200 square-foot, three-bedroom home. A local lumberyard helped provide the replacement windows. A grant from Lowe’s helped purchase additional materials for the project, including trim, paint, hardware, caulk and tools. Malott said more than $3,200 was spent on material for the project.

Stokes was home during the tornado that damaged the roof and windows of her home.

“It was scary,” she said. “It was in the afternoon and into the evening. You couldn’t see in the dark. It was frightful.”

Stokes said the MODR team was “some of the best people I have met.” She said in the few days they spent working on her home, they became friends.

“I had never heard of Missouri Baptist Disaster Relief,” she said. “They did more than windows. It was just wonderful the time they spent there. They counseled me through some bad situations and prayed with me.”

Malott said some of the team had driven more than five hours from the Boliver area to travel to the Bootheel. The team was provided for “very graciously” by First Baptist Church of Caruthersville.

“It’s hard for a church to turn their facilities over for a week,” said Malott. “They provided all our meals and arranged for us to be able to take showers at the racquet club across the street from the church.”

Malott said they formed a wonderful bond with Stokes. She showed her thanks in part by making each of the team members a T-shirt with “Disaster Relief Angels” emblazoned on the front.

“It was extremely touching,” said Malott.

“We are thankful for the volunteers who committed their time and skills to make this project come to fruition,” said Gaylon Moss, Missouri Disaster Relief Director. “Repairing this home brought great joy to the homeowner and an opportunity for MODR to bring help, hope and healing.”