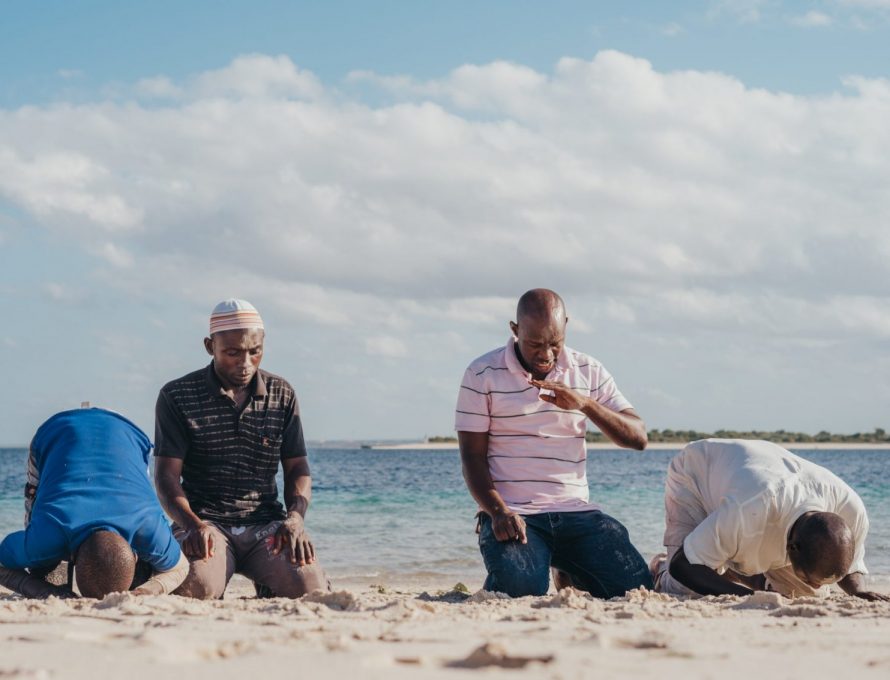 The coast of northern Mozambique is predominantly Muslim. Men do evening prayers on the beach. (IMB Photo)

Many people groups in Sub-Saharan Africa have no gospel presence and no knowledge of Christ. IMB leadership in the region set a goal to start ministering among 55 unreached people groups. The ministry initiative is known as “55 in 5.”

Daren Davis, the affinity leader for Sub-Saharan Africa, says their area has 55 unreached and unengaged people groups with populations of more than 100,000 people.

“We were looking for big, audacious goals that we could go after as [missionary] teams,” Davis says. “As I looked at this reality of 55 unreached and unengaged people groups, I began to evaluate that and think through that and ask the Lord, what do we do?”

At the beginning of the year when the 55 in 5 initiative launched, personnel in Sub-Saharan Africa were actively serving among 90 people groups.

“How in the world could we engage another 55 unreached, unengaged people groups?” Davis asked himself.

To accomplish this goal, Davis says there is both a necessity and an opportunity to minister alongside local Christians, missionaries from other organizations and churches in the U.S.

“If we do our part to mobilize, facilitate, be a catalyst among African partners and global partners, we could highlight 55 unreached and unengaged peoples and see them engaged with the gospel in the next five years,” Davis says.

Strides to meet this goal are underway.

After researching, IMB missionaries discovered that some of the 55 people groups already have a gospel witness because of the ministry of missionaries from other organizations and national Christians.

Jay and Kathy Shafto are partnering with local Christians in the Democratic Republic of Congo (DRC) to minister among two people groups that are a part of the 55 in 5 initiative.

The Shaftos and Vincent discovered the Sonde didn’t have the Bible in their own language, so they began an oral Bible storying project. After launching the project, they discovered several evangelical churches had already been planted and two different Baptist denominations were ministering among them.

“We have been happy to bring support to that engagement,” Kathy says.

The Shaftos say because of the zeal of Mama Helen, a Christian from the Ngongo people group of the DRC, 3,000 Ngongo heard the gospel and 167 committed their lives to Christ. Mama Helen used the 25 oral Bible stories and as a result, three new groups of Ngongo are learning the Bible stories. Sixteen Ngongo men and women are receiving leadership training.

The Ngongo are another 55 in 5 people group who now have a gospel presence.

There are now more than 2,000 Makhuwa Marrevone Christians.

“I’m thrilled that we are seeing momentum with our personnel, but we are also seeing momentum across our African partners. We have churches that are highlighting these 55 unreached and unengaged people groups, we have WhatsApp groups that are receiving the prayer updates and the different ways in which we are advertising and promoting prayer,” Davis says.

Marc, a Christian in Benin, is ministering among the Kotafon people group, one of the 55 in 5 people groups.

Marc became a Christian after the son of IMB missionaries Jeff and Barbara Singerman invited him to play basketball. When the Singermans moved to another country, Marc pledged to continue serving as a missionary.

“As a missionary working in full collaboration with the Benin Baptist Convention, he seeks out American churches to engage the unengaged,” Barbara says.

After the Singermans moved, Marc began ministering among the Kotafon, and in 2015, Mt. Vernon Baptist Church in Raleigh, North Carolina, sent volunteer teams to partner with Marc. Four churches have been planted and 10 Kotafon men are attending a Bible school.

Ministry among the Kotafon, Sonde, Ngongo and Makhuwa Marrevone is a team effort—IMB missionaries, missionaries from other organizations, national Christians and U.S. churches all play a vital role.

“We really are better together,” Davis says.

There are still many people groups in Sub-Saharan Africa who have no gospel witness and no known Christians. To learn more about these people groups and download prayer resources,please visit the 55 in 5 home page.

To learn how you can join the 55 in 5 effort, contact Pray4Africa@imb.org.

Caroline Anderson* is a writer for the IMB.