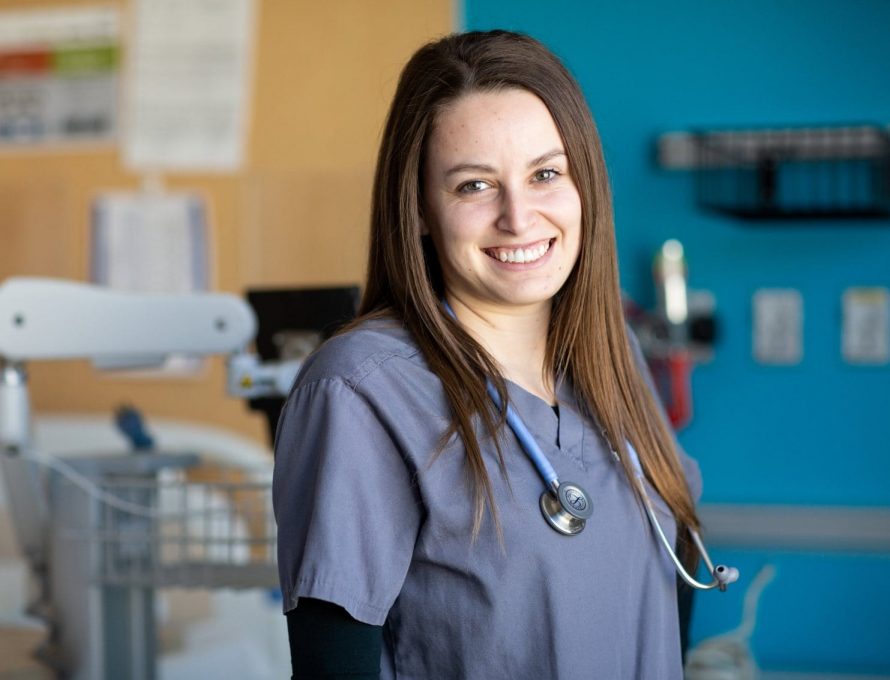 ST. LOUIS – It was just another headache.

Or so she thought.

This head pain would eventually lead her to the neuroscience floor of St. Louis Children’s Hospital. First as a patient, and, beginning this June, as a nurse.

For Samantha Greminger, head pain from migraines was a common occurrence. But one morning during her sophomore year of high school, she had a headache that was a little different.

“It felt like an ice pick was stabbing my head,” she recalled. She tried to treat her headache like a normal migraine, but a day later in math class, she had a feeling that something still wasn’t right.

“When I went up to the front of the class to complete a math problem on the board, I literally could not write,” said Greminger. “I had no idea what was happening to me; it was scary.”

The next morning, her hands stopped working so much that she couldn’t even brush her teeth.

For her parents, this was the final straw. They consulted her pediatrician, and he sent her to the hospital for a CT scan. As her parents drove her home from the imaging site, the doctor phoned to tell Greminger some startling news — she was having a stroke.

“The doctor told my mom I had a blood clot behind my right ear, and I needed to be driven to Children’s without delay, and they needed to remove it before the damage went any further,” said Greminger.

When she arrived at Children’s, the neurosurgeon ordered an MRI that suggested a different diagnosis.

“The doctor told us, ‘We don’t see a blood clot, but we see a mass. She definitely has a tumor,’” recalled Greminger. “They thought it was malignant. They thought I was going to die.”

But something didn’t sit right with her neurosurgeon, Dr. David D. Limbrick Jr. After a rushed brain biopsy, the radiologist re-read the MRI. She didn’t have a tumor. She was, indeed, having a stroke.

Greminger suffered from Cerebral Sinovenous Thrombosis, a type of stroke so rare that it affects only six in one million children. Because of the rarity, Greminger had to be rushed to Barnes-Jewish Hospital after a specialized surgeon was flown to the hospital. When she woke up, her neurosurgeon told Greminger that they wouldn’t know the extent of the damage until the next morning.

“When I woke up that Sunday morning, it was horrible,” said Greminger. “It was as if my left side was paralyzed. I’m left-handed. I was scared and only a sophomore in high school; no one wants that.”

But it didn’t stay like that. After continual intensive physical and occupational therapy, Greminger grew stronger, and most of her motor skills came back.

“I taught myself to be right-handed, and the rest you can’t tell by looking at me,” said Greminger. “You have to look for it in my smile, and I only remember that I have numbness and tingling in my face when thinking about the stroke.”

Because of this experience, Greminger decided to become a nurse. And this June, she will be living out her dream of being a nurse on St. Louis Children’s neuroscience floor.

“My neurosurgeon, Dr. David D. Limbrick Jr., continues to inspire me, motivate me and he even wrote my recommendation letter,” Greminger said.

When Greminger first planned to attend MBU, she thought she would need to transfer to Goldfarb since MBU didn’t have a nursing school.

“I wanted to go to a Christian school where I could focus on my studies,” said Greminger. “My mom earned a counseling degree from MBU, so I decided to check it out. I enrolled and was elated to find out that MBU was starting a nursing program. I knew MBU was where I wanted to become a nurse.”

Greminger’s experience at MBU’s School of Nursing has empowered her to bring her whole self — particularly her Christian faith — into her work.

“The foundation of Christian faith has really helped me, and they teach that we can bring our own perspectives and how we feel into being a nurse,” said Greminger. “We don’t push patients, but it helps us as nurses. The faculty teach us how to approach our work as our whole self, and how to overall be advocates for our patients.”

Greminger plans on applying to MBU’s nurse practitioner program and to continue to use her experiences to serve her patients.

“I’ve been told a lot that it was kind of a blessing,” said Greminger. “I feel like I can relate to patients more because I was in that spot. I can think, ‘How did I feel as a patient? What did I want my nurses to do for me, and how did I want them to treat me?’ As a patient you want your nurses to treat you as a whole patient and not what’s happened to you.”