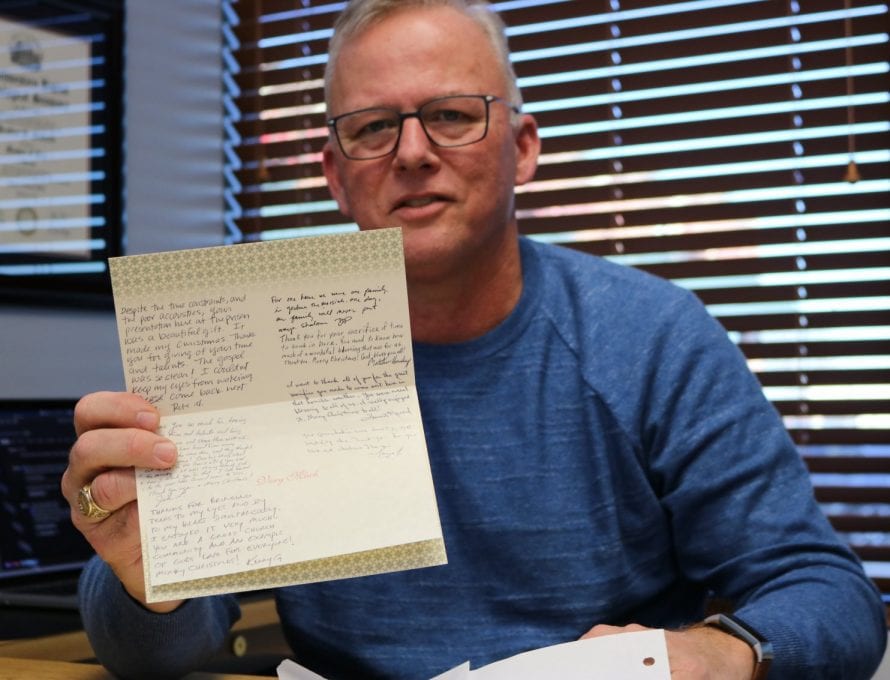 “One of my goals here is to help the worship ministry become more missional,” Brad Newbold, music pastor at Concord Baptist Church, told The Pathway. While he had been seeking a global mission opportunity for the music ministry, God was working behind the scenes to set up a mission endeavor in their own backyard. Last year, the choir and orchestra performed at Jamestown Baptist Church, where JCCC Chaplain David Tolliver serves as pastor. Then, this fall, Concord took their fall revival behind prison walls, with guest preacher John Stroup, co-founder of Freeway Ministries.

After seeing these successful ministry efforts, Tolliver asked Concord to bring their annual Christmas presentation, the “Festival of Light,” into the prison.

So, despite winter weather, 77 singers, instrumentalists and sound technicians filed through the prison’s security checkpoints on the evening of Dec. 16. After nearly an hour-and-a-half, they were in the prison and ready to perform. Among the sound technicians were staff members from the Missouri Baptist Convention (MBC), who also provided MBC speakers, monitors and other sound equipment.

“I wasn’t in the best perspective to see the inmates (during the performance),” Newbold said, “but choir members told me that some of the inmates had their face in their hands, just weeping. Some of them were on the back row standing up, with hands raised in worship. They laughed at all the jokes and the drama. They applauded every song. And multiple people came up to me afterwards and said, ‘Thank you. This was our Christmas.’ We knew that they were profoundly affected by it.”

One inmate remarked that, during his four decades at the JCCC, he’d never seen a group bring an orchestra into the prison – complete with two violins, a trumpet, timpani and chimes, two keyboards, three guitars and drums.

Within days of the concert, letters from inmates arrived at Newbold’s office. “For that one hour,” one inmate wrote, “you were our brothers, sisters, aunts, uncles, mothers, fathers, grandmothers and grandfathers. Though I’m 60 years old, I felt like a part of a family. Thank you. Merry Christmas and Happy Hanukkah! Shalom!”

Tolliver also wrote to Newbold: “It is not overstatement to say that you have left a lasting impression on the men here at JCCC – you left the indelible mark of the image of Jesus Christ, Himself. We saw His love and compassion in your faces and we heard His voice in your music!”

And the prison inmates weren’t the only ones impacted by this ministry endeavor. Members of Concord’s music ministry were equally blessed. And, according to Newbold, they hope to return to the prison for future performances.