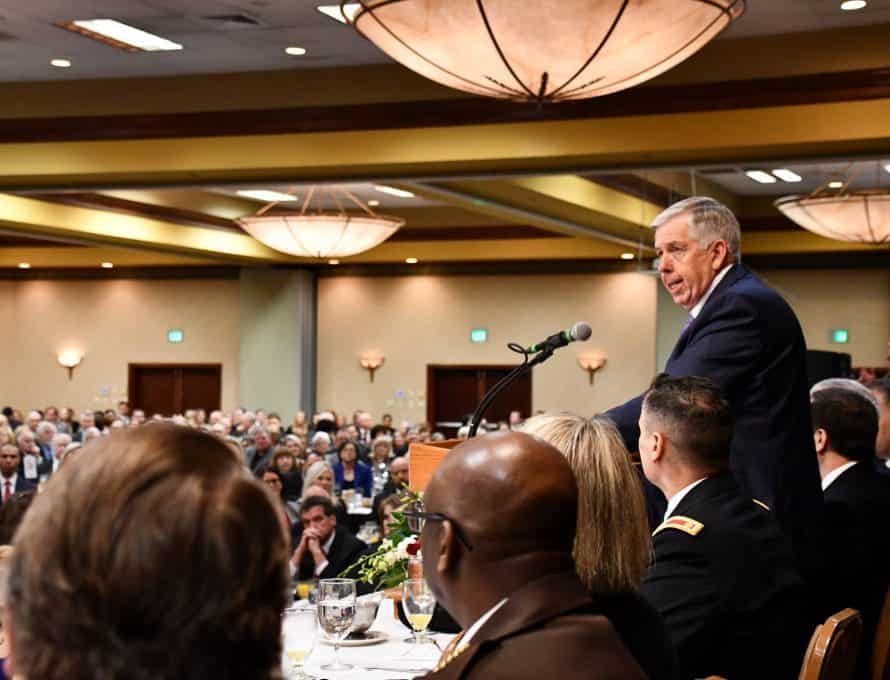 JEFFERSON CITY – The 2019 Governor’s Prayer Breakfast in Jefferson City, Jan. 10, reminded hundreds of lawmakers and other public servants in the state of Missouri that “God is in Control.”

“I wish a lot of the federal government was here this morning,” said Gov. Mike Parson, a member of First Baptist Church, Bolivar, pointing to a large red banner standing behind him emblazoned with the words, “God Is In Control.”

“They could look at that banner behind me,” he added, “because, regardless of what they’re doing, they are not in control.”

Parson told his audience that, like the Good Samaritan, they should seek to serve other people, and most of all to serve God.

“We should be driven by our faith every day,” he said, and we should put everybody in front of us.

“And we should put God at the front of the line.”

During his address, Parson also talked about going to Concord Baptist Church on a previous Sunday, where Pastor Monte Shinkle talked about “being focused” and avoiding “distraction.”

“We should be focused on Christian values,” Parson told his audience, urging them to “put God first.”

During the service, Pastor Billy Russell of FBC Bolivar prayed for the governor and others assembled in the room. “I was glad to be available and support Mike in prayer,” he later told the Bolivar Herald-Free Press.