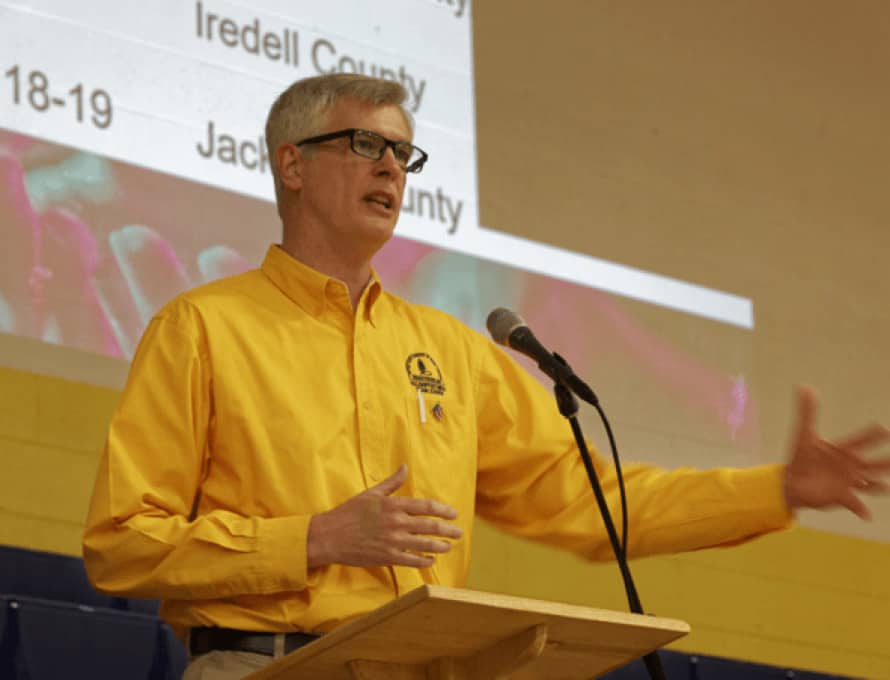 JEFFERSON CITY – In 1993, Gaylon Moss knew he was where God wanted him. He had answered the call to ministry and was a year into his studies at Southwestern Baptist Theological Seminary, but he didn’t know what was next.

His initial forays into preaching hadn’t been the most successful experiment – an early revival he preached was a “terrible experience,” to use his words. “Lord, who am I and why am I here?” he prayed. All his other classmates seemed like “miniature Billy Grahams.” So while he waited for God to speak again and point him in the right direction, he worked on campus as part of the grounds crew. He was sweeping bird droppings off the sidewalk when a fellow landscaper interrupted him.

There was historic flooding in Missouri, and the school was putting together a team of volunteers to do mud out. As hard as the work sounded, it was better than sweeping bird droppings, so Moss signed on.

The next thing he knew, he was in a van headed north to Missouri for his first of many disasters. He felt energized and loved serving others while being the hands and feet of Jesus. God confirmed to him that this was to be his ministry. He continued to volunteer as a part of disaster relief (DR) ministry of Texas Baptist Men. He needed an internship for his degree, so he served the Tarrant County (Texas) Baptist Association in their DR work. Whenever and wherever the disaster happened, Moss said “yes” to tornadoes, hurricanes, floods, fires and more. He even drove a truck to Missouri to pick up a load of hay when Texas was in the middle of a drought.

So when the phone rang in 1999 and it was an opportunity to move back home to North Carolina and serve their convention as the director of disaster relief, he was eager to say yes. He was 28 years old and leading an entire state of volunteers.

“God did all of that,” Moss said. “It was nuts. I jumped right in, made lots of mistakes, but learned a lot. The Lord was gracious!”

And that’s where he’s been serving for 19 years, until the phone rang again. This time it was the Missouri Baptist Convention looking to head up its DR ministry. Moss was willing to “say yes to the phone call,” but he said he was a little uncertain.

“Every time I told myself why my wife and I should stay in North Carolina, a verse in Isaiah would come to me,” he said. “Isaiah is asking the people of Israel ‘Are the Lord’s arms too short? Is His ear too dull to hear?’ He’s talking to the people of Israel about their sin, but I don’t think it’s invalid for me that God’s arms are not too short. We had great equipment, great people, great credibility, great networks… but I kept hearing that verse and God asking me, ‘Are my arms too short?’”

So after more prayer and a peace from God, Moss said yes to the phone call.

“We walk by faith, not by sight,” he said. “It’s not just something we talk about in Sunday School; it’s something we do. It was an act of faith for our family.”

Two weeks into the job as the MBC’s director of disaster relief – his first day was July 1 – Moss is still getting the lay of the land and gathering information about Missouri.

“Missouri Baptists have great potential, great support, and a great reputation,” he said, saying he stands on the shoulders of previous DR leader Dwain Carter – who now helps lead Texas Baptist Men’s DR ministry and interim DR director, Tamara Parry. “I want to build on that; I don’t want to mess it up. Whenever someone brushes elbows with a DR volunteer from Missouri, I want them to grow one step closer to Christ. Of course we want to make things better after a disaster, but whether it’s meetings, food, conference call, chainsaws, showers or chaplaincy, we want people to grow one step closer to Christ.