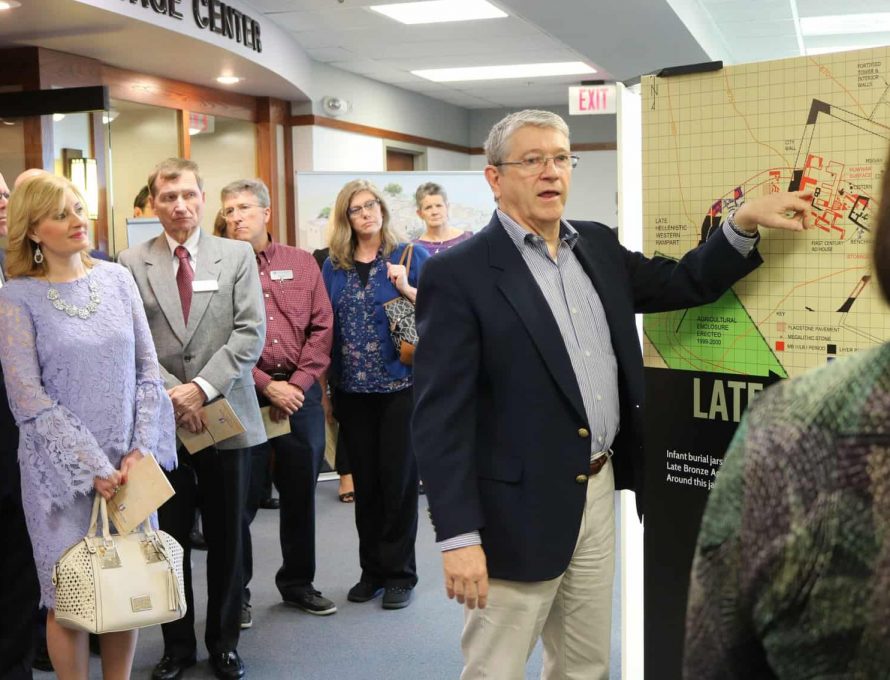 BOLIVAR – After the death of Moses, the Lord God called Joshua to lead His people across the Jordan River and to conquer the city of Jericho. Then, because they hadn’t completely obeyed the Lord’s commands, the Israelites met a humiliating defeat at the city of Ai.

But after facing God’s discipline and finding God’s mercy, Joshua once again set the stage to take the city of Ai. Joshua’s troops stationed themselves north of Ai, looking across a valley at the city. He placed other troops to the west, toward the city of Bethel, where they would wait in ambush.

“You can see all that geography right there,” Southwest Baptist University trustee Durwin Kicker, pastor of First Baptist Church, Marshfield, told The Pathway. He referred to the geography surrounding the ancient city, Khirbet el-Maqatir – which some archaeologists have identified as the biblical city of Ai.

Since 2015, Kicker has spent part of his summer in Israel, digging among the ruins of Khirbet el-Maqatir, and he returns to dig at the ancient city of Shiloh this summer. Reflecting on the story from Joshua 8 about the Israelites’ conquest of Ai, Kicker described how the landscape surrounding Khirbet el-Maqatir corresponds with the biblical account.

“It fits perfectly,” he said.

Kicker was among other trustees who toured SBU’s temporary biblical archaeology exhibit highlighting this archaeological site during their meeting last month. The exhibit, “Khirbet el-Maqatir – A Journey through Biblical History,” is on display at SBU through Dec. 8 in the Joyce Sells Heritage Center of the Harriet K. Hutchens Library on the Bolivar campus.

Bing Bayer, professor of theology, Old Testament and Hebrew at SBU, told trustees how some of the artifacts confirmed the reliability of the Bible – like one unique artifact speaking about the royal lineage of King David.

“Again and again, archaeology turns up evidence that says, ‘Yes. You can trust the Bible,’” Bayer told The Pathway. To those who still dispute some facts in the Bible, he replies, “Wait and See.”

After all, archaeologists have excavated only five percent of Israel’s ancient territory, he explained. And archaeology has a track-record of confirming Scripture: At one time, for example, some people doubted the existence of the ancient Hittite people group because it had only been mentioned in the Bible. But then archaeology turned up considerable evidence about the Hittites. “And today you can get a Ph.D. in Hittitology,” Bayer said. Once again, skeptics questioned the existence of Assyrian Emperor Sargon II, mentioned in Isaiah 20, until archaeologists discovered his palace. “Now,” Bayer said, “we know more about him than many other Assyrian kings.”

“This exhibit has significantly impacted the faith and understanding of the biblical world over the past four years, and I expect it to be a huge inspiration to the people of Missouri as well,” said Scott Stripling, who serves as provost at The Bible Seminary in Katy, Texas, and as the director of excavations for the Associates for Biblical Research at Khirbet el-Maqatir and Shiloh, Israel. “Visitors can expect to experience an illumination of the biblical text that will positively affect how they read the Bible and see the world around them.”

For more information about the exhibit, contact Dr. Bing Bayer, professor of theology, Old Testament and Hebrew, at (417) 328-1765 or bbayer@SBUniv.edu.