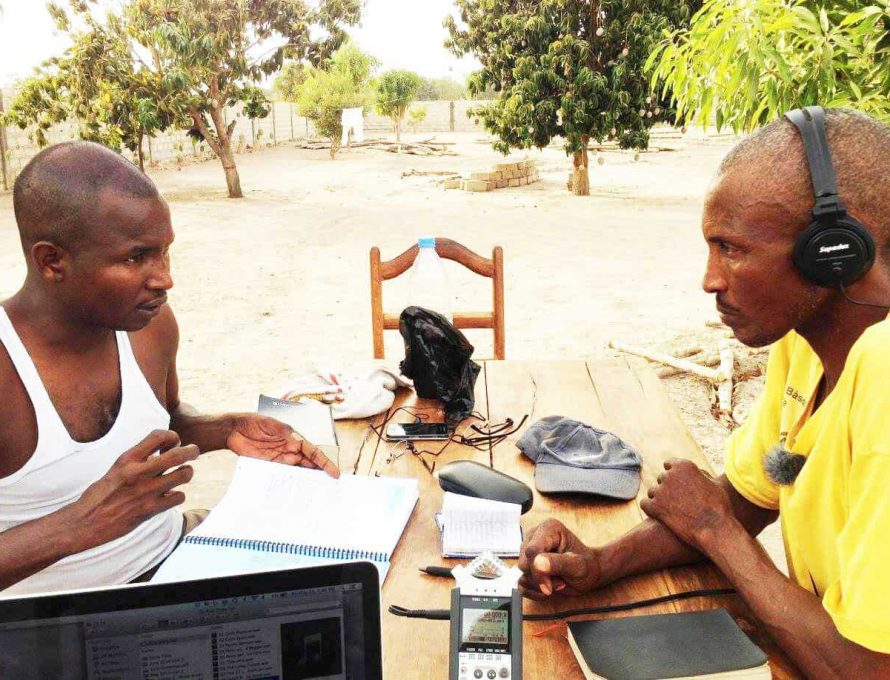 WEST AFRICA – A translator and local villager in West Africa work together to record Bible stories that will be distributed in audio format by mission teams from First Baptist Church, Arnold, to members of an unreached people group that until recently have had no access to Scripture. Photo courtesy of FBC Arnold

POMABAMBA, Peru – Rachel Wilson and her colleagues knew they hadn’t misused their Spanish. Something else prevented their audience – a Quechua family living in an isolated mountain village here – from understanding the biblical truth they tried to share with them.

Last year, Wilson traveled to Peru for six months to complete her bachelor’s degree in intercultural studies at Southwest Baptist University. During her trip, she worked among the Quechua people of Peru. Since roughly half of the Quechua population can understand Spanish, she spent much of her time sharing Bible stories with them in Spanish.

But two months into her trip, she and her peers ran up against a wall. Gathered around a makeshift table in a mud hut, the Quechua family they spoke with just couldn’t grasp the concepts and stories they were sharing. The message came across only when they found someone to translate their message in the Quechua language.

“You could just see the lightbulbs coming on, but it took Quechua for that to happen,” Wilson said. “It was super exciting, on the one hand, that they understood the message, but a little discouraging as well, because I knew that I couldn’t do that. I couldn’t just go and get that same result again.”

This experience reinforced Wilson’s desire to help people across the globe gain access to God’s Word. Last fall, she moved to Louisville, Ky., to earn a Master of Divinity degree in Missions and Bible Translation from the Southern Baptist Theological Seminary.

“Part of the commandment of Scripture is to go to the ends of the earth proclaiming the gospel, and for some people, that means their next-door neighbor,” said Wilson, who was a member of Center Point Baptist Church, Steelville, before moving to seminary. “But I have a heart for intercultural work and for going to the ends of the earth.”

Of course, Wilson isn’t alone in her passion for taking Scripture to every language group in the world. Missouri Baptists for many years have labored to translate and distribute God’s Word to people around the globe.

“Bible translation is critical to the spread of the gospel and the establishment of the church among all peoples,” John Vernon, Director of Missions for the Cape Girardeau Baptist Association, told The Pathway. “The Word of God is God’s revelation of Himself to mankind and reveals to us how all peoples can be made righteous through Christ alone.”

Vernon served with the International Mission Board in Central Asia for nearly 15 years. And for a time, he assisted a Bible translation team who was working to render God’s Word into the language of an unreached people group in the region. This team completed a full translation of the Bible last March. Although he no longer serves with the IMB, Vernon still serves on the project board for the Unreached People Group Partnership, which will host an annual meeting of U.S.-based partners at First Baptist Church, Perryville, July 27-28.

The need for Bible translation is great, Vernon said, especially since many people groups have little access to the Bible in their own languages. More than 1.5 billion people don’t have a full Bible translation, according to Wycliffe Bible Translators. Additionally, an estimated 114 million have no access to Scripture in their heart languages.

But, Vernon added, Bible translation is also “the single greatest need in order to successfully see the Gospel penetrate into every people group.”

“For those that are literate, Bible distribution – full and portions – remains one of the most effective forms of mass evangelization,” Vernon said. “For those that are illiterate – completely or functionally – the Bible is still necessary as ‘faith comes by hearing and hearing from the Word of God’ (Romans 10:17).

“Many of our unreached people groups are illiterate,” he added. “So we distribute audio versions on USB flash drives, through website links, radio broadcasts, and even films such as the Jesus Film. … This allows workers to get started with mass sowing of the Gospel even as the translators are working on other books of the Bible.”

Scripture for the illiterate

Indeed, mission teams from First Baptist Church, Arnold, are striving to share God’s Word with unreached people groups in West Africa that are not only illiterate – but that have no writing system for their languages.

In 2009, First Baptist Arnold adopted their first unreached people group in West Africa. And, although they sent mission teams to the region four times each year, they sought ways to invest more effectively and on a long-term basis. Then Jim Nicolls, missions coordinator at FBC Arnold, discovered MegaVoices – a solar-powered device, roughly the size of an iPhone, that could carry audio translations of Bible stories. So the church began translating a chronological set of 70 Bible stories that would serve as an oral introduction to Scripture among this people group.

“That allowed us to leave something with them that they could listen to together,” Ben Shisler, missions pastor at FBC Arnold, told The Pathway. “The MegaVoices have been instrumental in helping the small churches that are now developing in the villages.”

Not only do these MegaVoices allow Christians in the region to meet together and learn from the Word of God, but it also gives them an opportunity to evangelize. Sometimes, mission teams go to an evidently unreached village only to find that the MegaVoices are already there – distributed by indigenous Christians from other villages.

According to Shisler, First Baptist Arnold has created MegaVoices in nearly seven West African languages, distributing well over 1,000 of them in villages across West Africa. And, in doing so, they’re doing much more than giving high-tech devices to these unreached people groups.

“It’s God’s Word that has the power,” Shisler said. The MegaVoices simply make God’s Word accessible to these unreached – and illiterate – people groups.