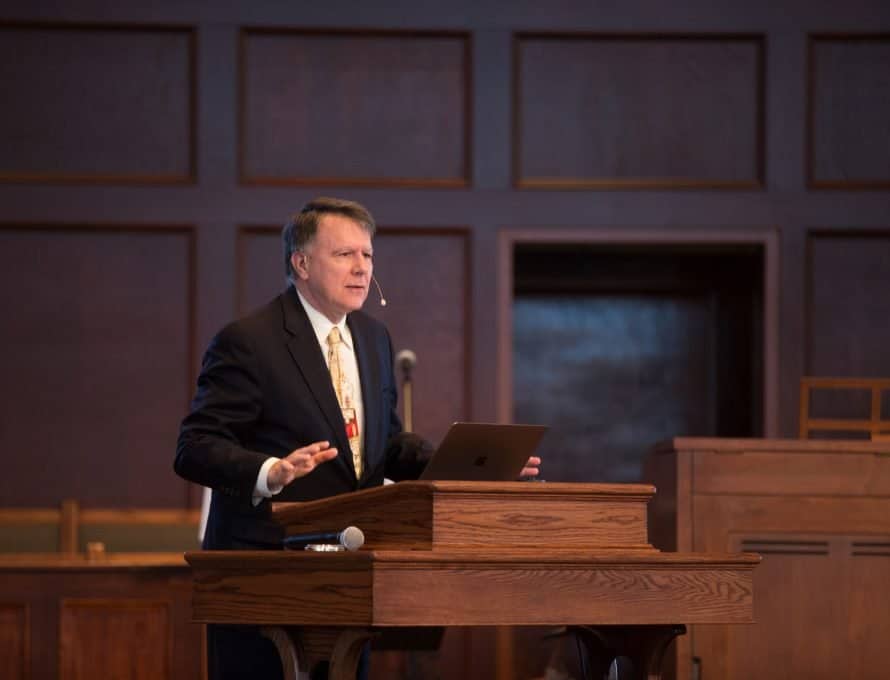 Assembling for its spring meeting on April 9-10, members of Midwestern Seminary’s Board of Trustees conducted significant seminary business and celebrated the hiring of a noted New Testament scholar. The meeting’s highlights came on Tuesday, when the trustees elected Andreas J. Köstenberger to the full-time faculty and announced the renaming/rebranding of Midwestern College, which is now known as Spurgeon College.

Based upon a recommendation from the Academic Committee, Köstenberger was elected by the Trustees to Midwestern Seminary’s faculty as research professor of New Testament and Biblical Theology. He will also serve as director of a forthcoming Center for Biblical Studies that will showcase his long-time scholarly vision of restoring biblical foundations for the family, the church, and society.

“We could not be more pleased to announce the election of Andreas Köstenberger to the faculty of Midwestern Seminary,” said President Jason Allen. “Dr. Köstenberger is among the most accomplished New Testament scholars in the greater evangelical world today. In fact, within our denomination and conservative Evangelicalism-in-general, Dr. Köstenberger is part of a ‘Big Three,’ which includes D.A. Carson and Tom Schreiner.

“In addition to bolstering our already-robust biblical studies department through his research, teaching and writing expertise, Dr. Köstenberger will provide mentorship to our younger faculty members as well.

“We welcome the entire Kostenberger family to the Midwestern Seminary community and look forward to the Kingdom impact they will have for many years to come.”

“I am deeply humbled and honored by the invitation to join the faculty of Midwestern Seminary and to direct the new Center for Biblical Studies,” Köstenberger said. “I love President Allen’s commitment to the centrality of the Bible and am confident the seminary will continue to thrive under his dynamic, visionary leadership.

“I am also greatly looking forward to serving alongside other prolific scholars who love the Lord and love serving his church.”

“Dr. Köstenberger is someone I have known for almost 20 years having first studied with him at Southeastern Seminary,” said Jason Duesing, Midwestern Seminary’s provost. “To have him join us at Midwestern in these days is a vital addition to our developing team of faculty-scholars, but even more, it is a joy to have the Köstenberger family join us as they are wonderful and delightful people and will contribute much to our entire community beyond their capable and proven scholarship.”

Köstenberger comes to Midwestern Seminary after serving for more than 20 years at Southeastern Seminary as senior research professor of New Testament and Biblical Studies. He is also a well-established author, having written, edited, or translated dozens of books.

He is the author, editor, or translator of numerous books including The Final Days of Jesus, Salvation to the Ends of the Earth, Going Deeper with New Testament Greek, and God, Marriage & Family. He is also the editor of several series on New Testament Greek (EGGNT) and biblical theology (BTNT, BTCP).

Köstenberger has been a guest lecturer at several major universities and seminaries. He has been featured on numerous radio interviews and has had numerous speaking engagements, including marriage conferences.

He is also the founder of Biblical Foundations, a resource center devoted to encouraging a return to the biblical foundations in the home, the church, and society. Köstenberger also serves as editor of the Journal of the Evangelical Theological Society.

Midwestern Seminary’s newest professor earned master’s and doctoral degrees in Social and Economic Sciences from Vienna University in Austria; his M.Div. in Cross-Cultural/New Testament/Counseling from Columbia Biblical Seminary in South Carolina; and his Ph.D. in New Testament and Biblical Studies from Trinity Evangelical Divinity School.

He is married to Margaret Köstenberger and together they have four children.

In another major move, Midwestern Baptist College was renamed “Spurgeon College” as a result of the Trustees approving a recommendation from the Board’s Executive Committee.

“We at Midwestern Seminary are thrilled to announce that Midwestern College is being renamed and relaunched as Spurgeon College,” Allen said. “We believe it portends a new season of great training for young men and young women wanting to impact the world for the cause of Christ.”

Allen noted that for the past decade, the undergraduate arm of Midwestern Seminary has been known as Midwestern College; yet over the past several years the school’s administrators have undertaken a season of review and reflection as how to best position the undergraduate program to impact and to advance the kingdom of Christ.

As a result, Allen added, Spurgeon College was born. The name isn’t just derived from the fact that Midwestern Seminary owns the Spurgeon Library, rather it focuses more on the person, Charles H. Spurgeon, and his character.

“More than the books and the artifacts of the Charles Spurgeon Library, we share his passions, his convictions, his commitment to ministry, to serving the local church, and to reaching the community and the world with the Lord Jesus Christ.,” Allen said. “Certainly, Spurgeon was great in the pulpit, but also he founded some 66 different ministries and different points of social and cultural impact.”

Among those was an affinity for education, and Allen said the mission of Spurgeon College will be to educate the next generation of leaders to impact the world in the workforce.

“Through our college, we will maintain a Bible-based, ministry-focused curriculum, but also alongside of that will be degree options for those who are not only called to serve the local church, but to also be prepared to make 1,000 different touch-points of light for the cause of Christ stateside and around the world.

Sam Bierig, who was named dean of the college in February, will lead Spurgeon College into this new season. He noted that the college will maintain its focus on biblically-based degrees as well as providing students with disciplines that can train them to work in the marketplace.

“Spurgeon College is hard at work to expand degree offerings in the fields of Bible, business, and education,” Bierig said. “It is our desire at Spurgeon College to raise up Kingdom-minded leaders for the Church, marketplace, and educational institutions throughout the United States and abroad.”

Midwestern Seminary Provost, Jason Duesing, echoed Allen’s sentiments about the college’s namesake saying, “The naming of our college for C.H. Spurgeon brings a smile and reflects our joyful mission. For, in the name Spurgeon, we are not only upholding the legacy and core theological commitments of this Baptist theologian and preacher, but we are pointing to what Spurgeon spent his every breath pointing—namely Jesus Christ.”

During his President’s Report, in addition to an update on the progress of construction on the Mathena Student Center and Trustee Building renovation, which included tours of both spaces, Allen announced to the board record enrollment for spring semester and discussed the operating budget planned for the next year.

In presenting the institution’s spring semester enrollment, Allen explained that both headcount and hours sold had reached record levels.

“We are grateful to the Lord that he continues to allow us to be in a season of incredible enrollment growth,” Allen said. “If all trends continue, we are on course to have 3,300 students enrolled this academic year. This is up from 1,107 students in 2010-11. Our continued focus is the residential M.Div., but our online, master’s, and doctoral degree programs continue to flourish as well.”

Also, during his report, Allen informed trustees about the school’s operating budget for 2018-19. In presenting the coming year’s budget of more than $22 million, Allen noted that the aim of the institution’s business model is to properly steward the finances supplied by God, as provided through the SBC’s Cooperative Program, tuition, and other revenue streams.

In other business, during the plenary session the trustees welcomed a new member, re-elected and promoted faculty members and selected board officers for the upcoming year.

In another academic matter, Allen introduced to the trustees Sam Bierig, who assumed the role of the dean of Midwestern College in February.

Additionally, with nominations coming from the Governance Committee, the Board elected its 2018-19 officers. John Mathena, a businessman from Edmond, Okla., was elected as chairman; Lee Roberson, a businessman from Hobbs, N.M., was named first vice chairman; Chad McDonald, a pastor from Lenexa, Kan., will be second vice chairman; and Bryan Pain, a pastor from Duncan, Okla., was elected as secretary.