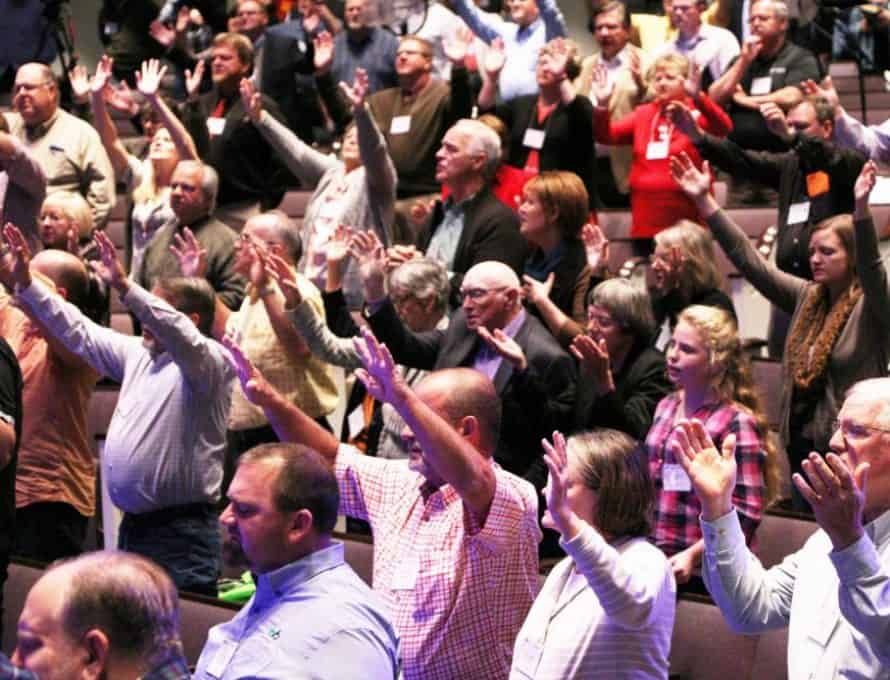 RAYTOWN - Messengers from churches across Missouri join together in worship during the annual meeiting of the Missouri Baptist Convention. Pathway photo by Kenny McCune

NASHVILLE – Keith and Kristyn Getty are calling on the church around the world to rediscover the power of congregational singing. The couple, who have written hymns sung by an estimated 40-50 million people in church services each year, echo Reformer Martin Luther’s challenge to view congregational singing not simply as an innovation, but rather a return to the Bible and the biblical practices followed well by the prophets and the ancient Church fathers.

At the time of the Reformation, congregational singing was considered a heretical act, but Luther knew it was a biblically vital component to sustaining the gospel in the hearts of God’s people. He believed that God’s people have to sing because the act of singing is a central part of our basic spiritual health.

“What many people do not know is that while Luther’s 95 Theses of theology may have opened the floodgates for the Reformation, his insistence upon a return to, and celebration of the sacred act of congregational singing in the people’s known language built the community apparatus that kept those floodgates open for years to come,” said Keith Getty.

Getty started writing hymns in the year 2000 in significant part inspired by Luther’s congregational singing, rich theology and high artistic view of church music creating a unique brand of modern hymns that he and Kristyn have become associated with. The first hymn he wrote was with Stuart Townsend entitled “In Christ Alone” which echoed Luther’s rallying cry.

How the congregation sang was a key question for Luther; he believed that a truly biblical church would be one where every believer was actively participating in every part of the service, including the singing, celebrating the gospel message together.

“Luther had come to realize what his ancient predecessors had always known: God’s people are catechized by what they sing. A preacher can teach what the Bible means, but people “carry out” the Bible by the songs they sing. Singing affects people’s minds, emotions, hearts, memories, prayer lives – and ultimately, their thoughts and spoken words,” said Keith Getty.

Two years ago, the Getty team decided to focus on the 500th anniversary as a chance to launch their Sing! initiative beginning with the global conference in Nashville, Tenn., and the launch of their book Sing! In the final quarter of this year, they are leading a series of US city-wide summits on congregational singing, relaunching their Christmas tour Sing! An Irish Christmas in venues including Carnegie Hall (the only Christian show of its kind play at the venue) and the Kennedy Center, to be aired on PBS during the Christmas season.

Sing! is now available in all bookstores and available online at www.gettymusic.com.