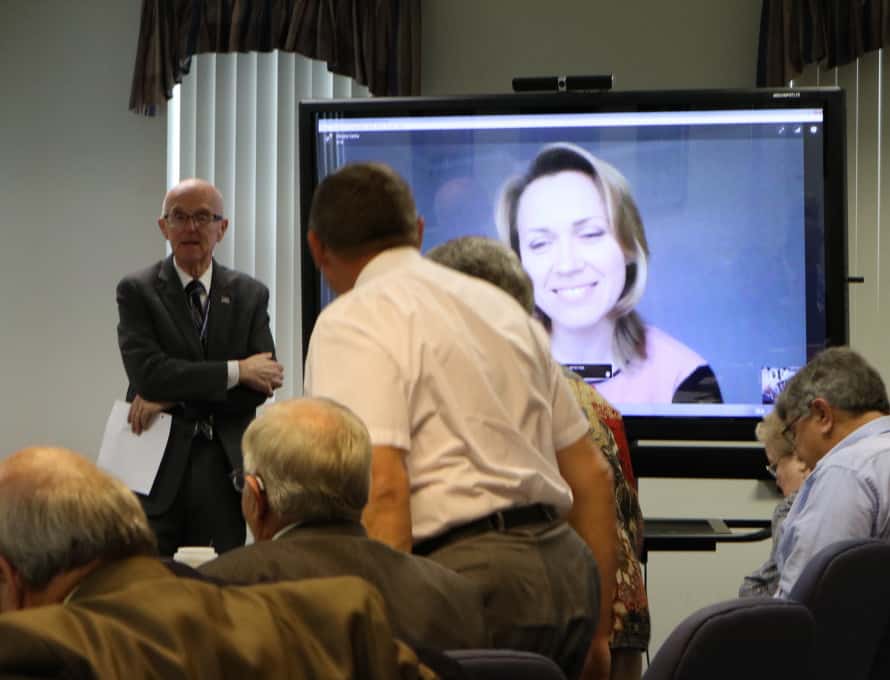 BRIDGETON - Oksana, one of the leaders of New Hope Ukraine, speaks to Missouri Baptist Children’s Home trustees via videoconferencing during their Oct. 10 meeting here. Pathway photo

Earlier in the summer, the MBCH hosted leaders from New Hope Ukraine, a children’s ministry wtih a mission similar to MBHC’s. In September, several leaders from MBCH  and trustees flew to Kiev and the surrounding areas to further explore partnership possibilities. While the exact nature of those possibilities are still being worked out, the MBCH leadership was excited about what they saw in the Ukraine.

Russell Martin, president of the MBCH, said he was impressed with the “openness they expressed to our advice and counsel. They have a real desire to learn and minister in such a way that they will be good stewards of the resources and opportunities God provides.”

He added that the “visit with the staff of New Hope Ukraine was almost surreal to hear their hearts for ministry and the similarities we share in our missions. Its logo and catch phrase of serving children, youth and families is so similar to ours. I think we can do a lot together by sharing resources and networking in such areas as camp and training (online and face to face).”

Another reason to celebrate is that contributions to MBCH from the Missouri Baptist Convention through the Cooperative Program are expected to go from $387,579 in 2017 to $503,200 in 2018.

“This is the single largest increase I have seen in my 40 years here,” Martin said, “both in dollars and percentage.”