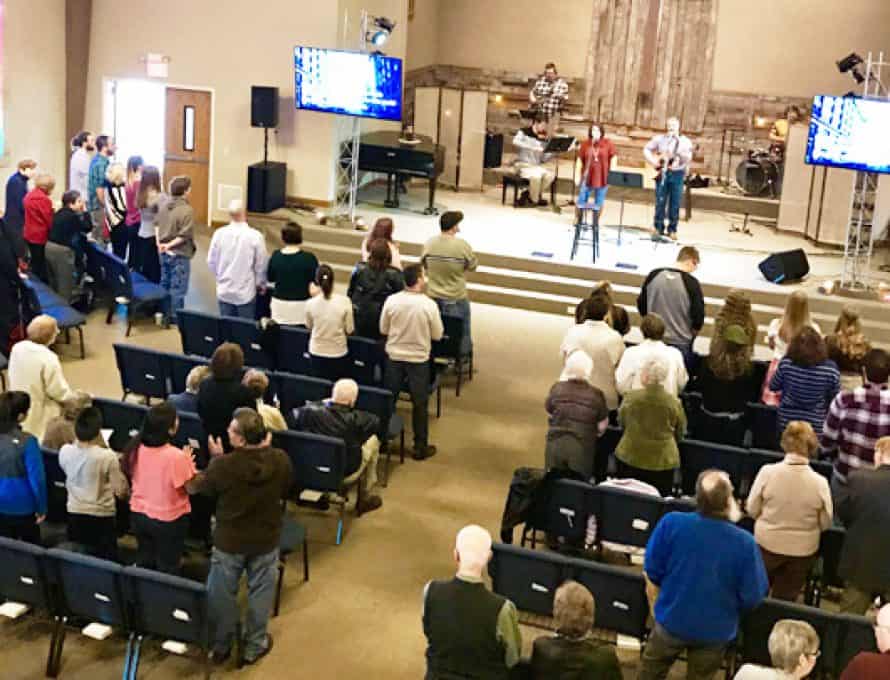 ST. LOUIS – Formerly a declining congregation, Church at Affton in St. Louis was replanted in March 2016 and has since baptized 15 new believers. Photo courtesy of Jason Helmbacher

In a process facilitated by executive director of missions Jim Breeden, First Baptist decided to replant itself in March 2016 as Church at Affton, led by replanter Jason Helmbacher. During its first year, the replant baptized 15 new believers and has come to average just over 100 worship attendees – about 40 of whom were First Baptist members before the replant.

Helmbacher described the church as being “reborn for the sake of the Gospel,” according to a video on the association’s website.

Within the St. Louis metro area, Church at Affton is not alone in its testimony of revitalization. Among the 140 congregations that cooperate with the local Baptist association, more than 30 have participated in an association-led revitalization process over the past seven years, Breeden told Baptist Press, with more than a dozen opting to replant as new churches.

The replants have experienced a collective 400 percent increase in worship attendance, Breeden said.

That success has led the St. Louis Metro Association to partner with the North American Mission Board in publishing resources for church replants – including the Associational Replant Guide – that it hopes will spur sister associations to similar success. The resources are available at www.churchreplanters.com.

In St. Louis, church revitalization begins when a congregation that is plateaued or declining requests help from the association. At times a church initiates contact, and at times the association does. Citing data from New Orleans Baptist Theological Seminary, Breeden estimates 90 percent of churches – both large and small – may be candidates for revitalization.

Each revitalization effort is led by the association’s church revitalization team (CRT), which comprises pastors who have revitalized or replanted congregations in St. Louis. The CRT evaluates the church under consideration. Then a series of meetings culminates in recommendations the church must accept or reject in a business meeting.

“There’s not a one-size-fits-all or a cookie-cutter approach,” Breeden said. “Every church is unique, and every situation is unique. Every part of St. Louis, for that matter, is unique and needs a church that’s healthy and fits their culture.”

The association’s church revitalization manual notes six potential courses of action that may be recommended to a congregation:

In every case, Breeden said, associational leaders “don’t do things to churches” but “with churches.” If a church does not affirm the CRT’s recommendations, the association exits the revitalization process and seeks to support the congregation in other ways.

One key leader in helping other associations launch revitalization ministries like that of the St. Louis Metro Association is Bob Bickford. Called in 2012 as pastor of declining Sherwood Baptist Church in St. Louis, he led the congregation to replant as The Groves Church and began to dialog with other replanters in the process. Within months of launching the replant, he joined the CRT and currently chairs it.

As Bickford’s passion for church replanting increased, he launched churchreplanters.com in 2015, with testimonies, forums and other resources for replants. This year, Bickford joined NAMB’s replant team as associate director, and his website has been incorporated into NAMB’s church replanting strategy.

“Our prayer,” Bickford told BP in written comments, is that the St. Louis Metro Association’s approach “will serve to further the work of replanting by equipping [directors of missions], associations and churches to envision what God can do when a church determines to make courageous decisions and changes necessary to see their congregation move from decline and near death to life.”

Breeden “is a seasoned and skilled leader on the topic of church health and revitalization,” Rumbough, executive director of missions for the Lexington (S.C.) Baptist Association, told BP in written comments. “He understands the necessity to have the right leaders equipped and available to customize the revitalization process for each church requesting assistance, which is the key to the association’s effectiveness.

“The St. Louis Metro Baptist Association has created a church health culture,” Rumbough said, “and a process for assisting that is a model for associations today.”