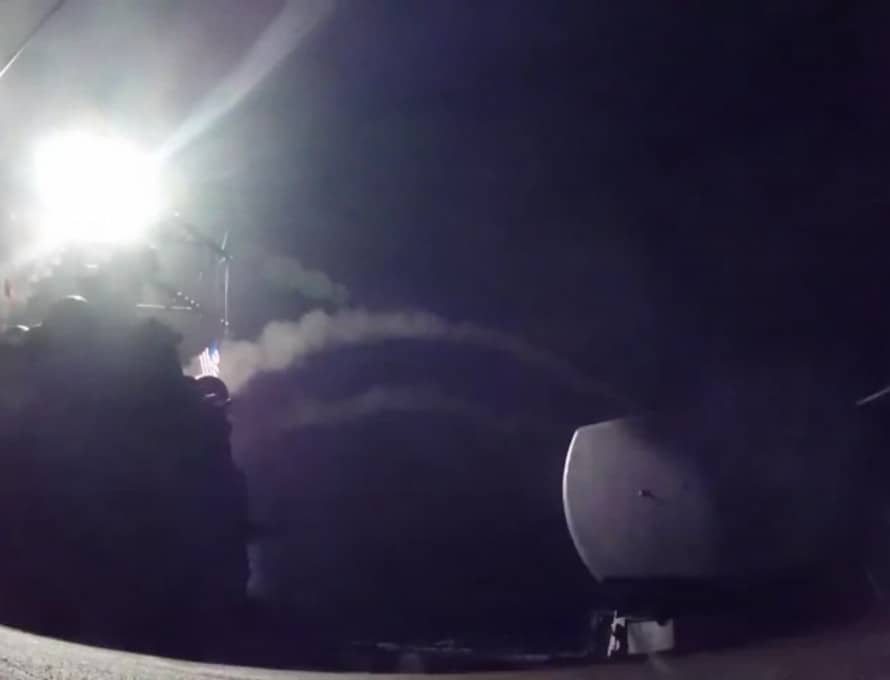 SYRIA – The USS Porter fires a Tomahawk missile at a Syrian airbase April 6 in retaliation to deadly chemical attacks.

American warships fired 59 Tomahawk missiles April 6 at a Syrian government airbase believed to have been used two days earlier to launch a chemical attack against a northern Syrian city held by rebels in the nation’s six-year civil war.

Syria’s chemical attack killed at least 86 people, including 27 children, according to CNN.

The U.S. missile strike, which was carried out just before 4 a.m. local time to minimize casualties, killed six people, according to media reports. The action targeted aircraft, fuel, ammunition supply bunkers and “the things that make the airfield operate,” a Pentagon spokesman noted.

Trump said deterring “the spread and use of deadly chemical weapons,” like the nerve agent allegedly deployed by Syrian President Bashar al-Assad, is in the “vital national security interest of the United States.”

Carver, the North American Mission Board’s executive director of chaplaincy, claimed the American strike should be considered an ethical use of military force for at least three reasons:

• It had a just cause because “the U.S. had warned … Assad for over five years against the movement or deployment of weapons of mass destruction,” and Assad “failed to heed the clear warnings.”

“In the aftermath this week’s deadly gas attack, it simply made no sense for President Trump to wait for Assad to use these deadly weapons at some point again in the future. It was necessary for the sake of peace and order in that region,” Carver told BP in written comments.

• Trump’s order to strike was lawful and in keeping with the U.S. president’s “authority to take limited military actions that protect U.S. national security, promote our democratic values and defend the innocent of other nation states. If the U.S. had done nothing, it would have been a dereliction of our duty as a world power and a nation founded on Judeo-Christian principles.”

• The strike was a “last resort” following years of diplomatic, economic and political efforts to halt human rights violations by the Assad regime.

Carver added that Americans should “pray without ceasing for our president and all of those who are in authority over our lives, especially during this critical time in the history of the world.”