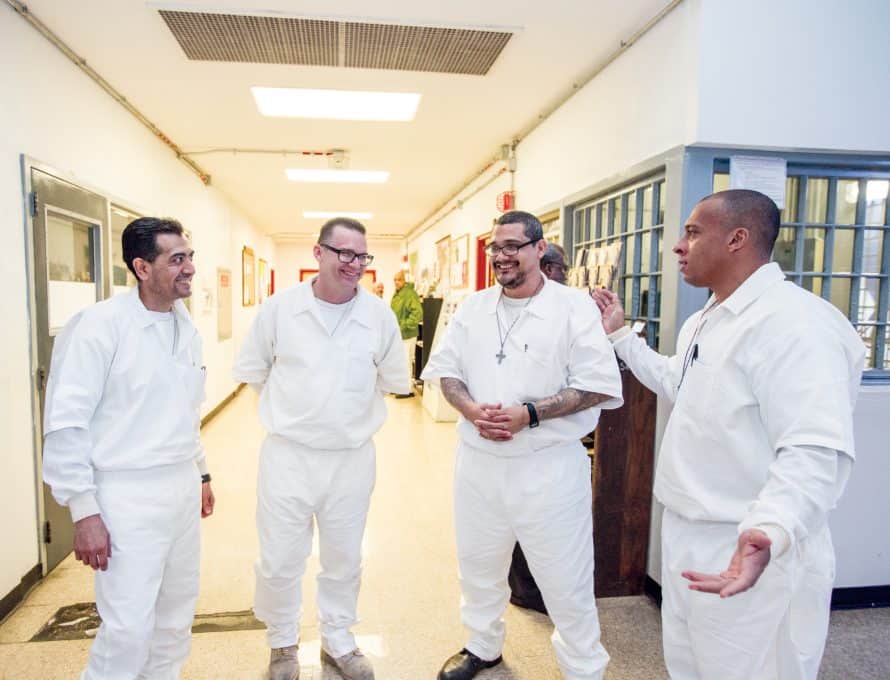 HUNTSVILLE, Texas (BP) – “I’ve been in prison before,” Michael Rios humbly reflects. “I came in when I was very young. I had the right ideas, I had the right intents: get out, get married, have a life.”

Dressed in a white prison uniform, Rios speaks slowly but directly, his tattooed hands slowly gesturing to accentuate his words. He has been in prison longer than some of his fellow inmates have even been alive. Though Rios had the “right intents,” bad choices kept him locked up, and he is now serving a life sentence.

A sense of weariness can be detected in his voice, but curiously, it is overshadowed by another sentiment: hope. His years behind bars afford him an insight into prison life that opens doors to provide the other inmates exhortations of eternal value.

“I see a lot of myself in these guys,” Rios says. “They want to go home, but if they have no foundation in God, they’re going to fail …. God gave me a chance and I failed, so I try to reach out to others so they won’t fail.”

Rios is one of four “field ministers” at the Estelle Unit in Huntsville, Texas, deployed after graduating from Southwestern Baptist Theological Seminary’s baccalaureate prison program at the Darrington Unit in Rosharon, which equips life-sentence inmates with a theological education and then sends them to other prisons across the state to invest their lives in fellow inmates.

“We weren’t born to live in this box,” Rios declares as a prophet of hope to those more or less written off by society. “We were born to be fathers, husbands, leaders and servants in our community.

“You’ve made maybe 3,000 decisions to get you over here. All you have to do is make that one decision to help you get out, which is [to follow] Christ.”

Southwestern launched its Darrington extension program in 2011, with Rios and fellow Estelle field ministers Raymond Ramirez and Michael Ryan in the inaugural class of 33 inmates who graduated in May 2015 with bachelor of science in biblical studies degrees. An additional 33 inmates – among them Billy Jones, Estelle’s fourth minister – graduated the following year. These 66 men have since been deployed to other units – or, as they view them, mission fields – with Rios, Ramirez, Ryan and Jones all assigned to Estelle.

All four of Estelle’s ministers, who surrendered their lives to the Lord while in prison, attest that Southwestern impacted them greatly. “It really has taken me out of my shell,” Rios says. “It’s molded me and shaped me to be what God wants me to be.”

Ramirez adds, “A lot of my questions were answered. And that has impacted me so much that it has given me a desire to teach, to pass on what I’ve received. So now, that’s actually what I’m doing. I’m doing a lot of mentoring, a lot of discipling, a lot of teaching.”

Since arriving at Estelle, Ramirez learned sign language in four months in order to minister to the prison’s deaf community. He is often asked how he managed to accomplish such a feat, and his response is simply, “Man, I don’t know. I’m freaking out about it myself.”

Ramirez also works with the unit’s Spanish community and runs a “mini-seminary” within the English-speaking community, walking his students through a theological curriculum he himself wrote based on his seminary education, complete with exams, quizzes, book reviews and presentations.

Rios, meanwhile, has become the guards’ go-to counselor for inmates in need, even gaining access to the high-security wing of the prison. Ryan leads Bible studies and does room visitations in the medical facility. And Jones “tier walks” the north end of the prison, walking the runs from cell to cell and engaging the inmates in conversation. He also does counseling and teaches a discipleship class, covering such topics as biblical history and interpretation and how to do evangelism.

Through the course of their ministry, Rios, Ramirez, Ryan and Jones have found that simply being there for the inmates and assuring them that they are loved can reduce even the most hardened criminals to tears. The experience of having such people open up and share their deep, intimate thoughts has led Rios to conclude that “it has to be God doing these things.”

In line with this changing of culture, the ministers have begun to observe an eagerness in their disciples to make disciples of their own. Jones witnessed one of his students approach a member of a gang known as “the Aryan Circle” after learning an evangelism method called the “3 Circles Life Conversation Guide,” developed by the North American Mission Board.

The student asked if the gang member had ever heard of “the three circles.” Intrigued simply by the word “circle,” which he assumed related to his gang in some way, the gang member said “no” and then inquired about them.

“And so the [student] was able to present the Gospel using the three circles to him, and now he comes to church every Sunday,” Jones says. He joyously reflects, “That [evangelism method] was something that I taught the guy.”

Chris Carter, senior warden at Estelle, says the efforts of the four ministers have transformed the culture of the prison. A basketball tournament last fall, for example, saw people of every race participate, without fights or issues of any kind. Previously, the warden says, the inmates would have been unwilling to stay in the same room with one another. Because of the field ministers’ influence, the inmates not only had fun together during the tournament, but in between periods of play, they all prayed together.

“When you introduce God into a culture, they stop fighting; the aggression goes away,” Carter says. “They start looking for ways to build each other up as brothers. They don’t look at each other as enemies anymore.”