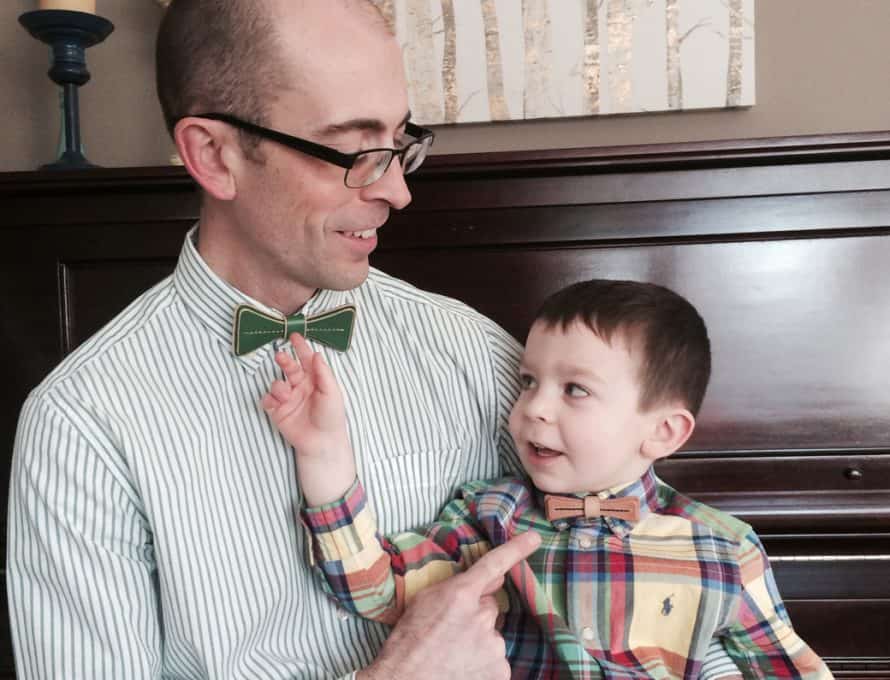 LEE’S SUMMIT – Jesus probably would have looked dapper in a bow tie, but then, He didn’t need help standing out from the crowd.

“Every day someone stops me and talks to me about the tie,” said Nathan Begnaud, owner of Madison Street Leather and pastor of Redemption Church here. “It turns into a gospel presentation as I share about the idea, about Maxwell, and about my faith in Christ. This week I had three such opportunities in the same day.”

Begnaud handcrafts leather bow ties that he sells online, as well as in twelve stores (and counting) across the Midwest. He was inspired to make the leather bow ties after seeing an episode of Shark Tank that featured wooden bow ties. Begnaud’s father is a talented leather craftsman who owns a leather business in Minnesota, though Begnaud was only familiar and not an expert in the craft. But God kept the idea in the corner of his mind as he continued his pastoral work planting Redemption Church along with his wife, Emily, and their two children.

“Then the unexpected came into our lives in the fall of 2015 and we knew I needed to shift gears,” Begnaud said. “My third child, Max, came to us with the gift of Down Syndrome, which continues to be a massive learning curve for us.”

Max has already been through open-heart surgery, as well as several other procedures; he has in-home occupational therapy and he regularly sees nine different specialists. The so-called “normal rhythms” of life were gone and Begnaud saw the desperate need to be present with his family and to connect with people as a church planter in a more flexible way.

“So with the hope that I can not only be more available to my family, but also incorporate my family into helping produce and ship these handcrafted bow ties, Madison Street Leather was born,” Begnaud said. “It’s been an ethereal experience because since we started crafting them I’ve felt a certain joy, like making them with the ability God’s given me is another way to express my joy in Him.”

Meanwhile, Begnaud also felt a shift in his heart and mind regarding his pastorate ministry. He had been part of churches in the past that tended to focus on average attendance and programs and Begnaud got burnt out.

“When I started looking at how Jesus and the apostles did ministry and how it was far more relationally-based, I became deeply convicted,” he said. “I found myself aching for more and more opportunities with people.”

The first time Begnaud went to one of his many café “offices” wearing his new prototype, he discovered his leather bow ties were also the answer to his desire to meet people. It seemed the joy he felt in making them matched the joy people felt when they saw them.

“People notice me,” he said. “Even if they don’t say anything, they at least look and smile. But often people ask me what my bow tie is made of. Is it cardboard? Where did I get it? I get in conversations with people and we swap stories.”

And no two conversations are alike. God uses these divine appointments in a variety of ways. Sometimes Begnaud’s able to share his testimony about his son and clinging to Jesus during his weakest moments and other times his pastorate comes up and it becomes more of a spontaneous counseling session.

“It’s a mixed bag of opportunities that has so many possibilities,” Begnaud said. “It’s the ongoing narrative of my life and it’s still being written. The old methodology is to get to Jesus and the power of the gospel. Don’t get me wrong, the gospel is important and sometimes I get to share it. But as I’m depending on the spirit sometimes I realize it’s a flight of stairs and I only have five minutes. Sometimes I share about how I trust God for provision or how I know God has a plan and purpose for me and my family and well, these bow ties.”

His ministry opportunities don’t end at the local café. Begnaud often promotes his products on Instagram by giving a free bow tie to someone with a considerable following. One time he chose a man from London who knows how to dress with style. After the Instagram post, Begnaud received an Etsy order request from Veronica in Hong Kong. She loved the bow tie, but wanted hers in pink.

“Now rather than let the goodness stop there, I decided to send her a number of e-mails sharing my story and hearing her story,” Begnaud said. “In the process, I got to the gospel. She doesn’t believe… yet, but she said her mom is a Christian. I’m realistic about the influence I can have from this distance, but then again, I never envisioned a guy from London, whom I’ve never met, could help connect me to someone in Hong Kong. Pretty cool.”

God’s using leather bow ties in Bagnaud’s ministry, but the opportunity to the impact the world with the gospel looks different for everybody.

“Flip over stones, bark up trees, try things that are unchartered like making a bow tie,” Begnaud said. “A buddy of mine owns a gym and ministers specifically to young student athletes. Whatever it is, get the story of the gospel and God’s work in your life out there and out of all the structured stuff. But most importantly, whatever you do, it needs to be done in faith. I still don’t know the whole scope of what God is going to do through the bow ties, but even my glimpses into his plan are rewarding and fulfilling and I know are delighting to God. If you have the faith piece, venture out, because with God all things are redeemed when they are surrendered to Him.”

For more information or to see the variety of handmade leather bow ties available visit madisonstreetleather.com or search MadisonStreetLeather on Etsy.