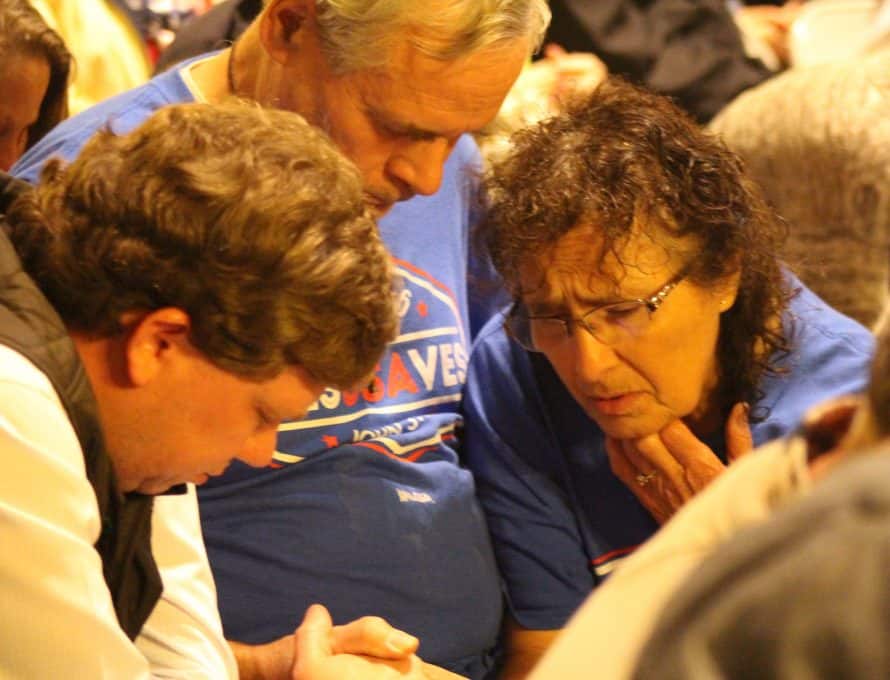 JEFFERSON CITY – Missourians pray at a rally in the Capitol’s Rotunda here, May 17. Pathway photo.

JEFFERSON CITY – Hundreds of Missourians gathered for prayer in the Rotunda of the Missouri State Capitol following Franklin Graham’s Decision America rally, May 17.

John Jones, pastor of Cadet Baptist Church, drove to the Franklin Graham rally not only with his wife and young children, but also with roughly 20 “prayer warriors” from his church. The group arrived late at the Graham rally because of a traffic jam caused by an car accident on their way to Jefferson City. But they were glad to join with others in the Capitol’s Rotunda to pray for a movement of God.

“Thankfully, they were having a prayer rally in here,” Jones said. “This is really what we wanted to be a part of because we know that, unless God moves, our nation is in deep, deep distress. We’re not going to carry this on our own. So we had many faithful prayer warriors come, probably about 20, from our church.”

During the prayer rally in the Rotunda, candidates in the Missouri State elections were invited to lead Missourians in prayer for the nation and state’s government, educational system, media and families, as well as other issues facing the United States. Following prayer led by each of these candidates, Missourians prayed alone or in groups, calling out for an awakening to be poured out on the nation.

“Our Father and our God, we come to you today not angry, but with broken hearts, broken for the sin that exists in our nation today,” Hinkle said, praying the God would forgive us of our sins. He also thanked God for putting the governance of the United States into the hands of the people, and prayed that they wouldn’t take this responsibility lightly. He prayed that God would lead citizens of the U.S. and their leaders to make decisions that would ultimately honor Him.

After this prayer rally, Missourians were invited upstairs for lunch and for the singing of “Amazing Grace.”