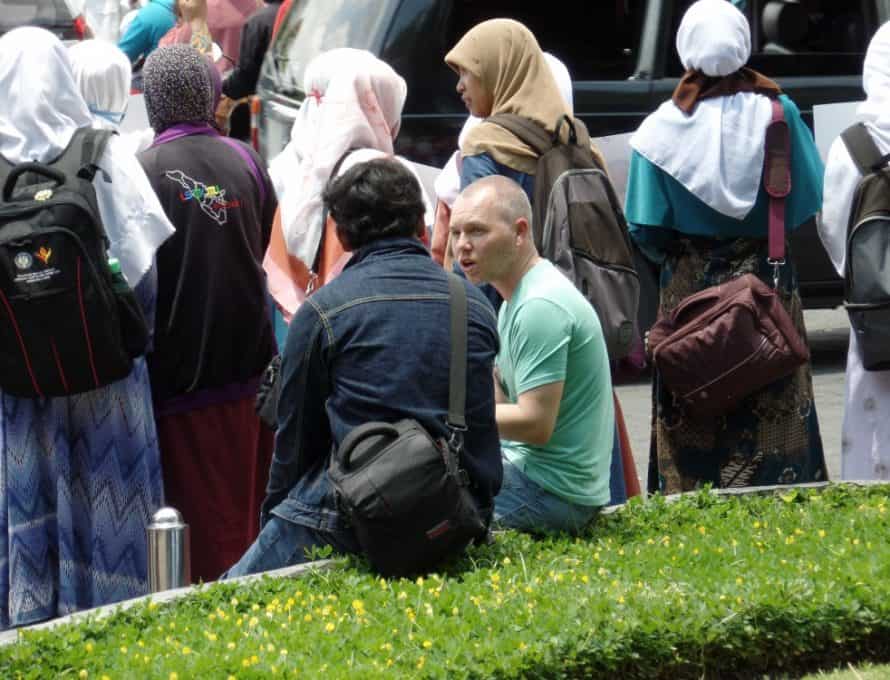 INDONESIA – A Missouri Baptist man shares the gospel during a rally at this busy intersection here during a recent mission trip. Pathway photo.

INDONESIA – Missouri Baptists in St. Louis  have learned the longterm benefits of going on mission with God as they’ve organized trips to the islands of Indonesia.

Since 2013, Lee Perkins* has led collegiate students with St. Louis connections to Indonesia to reach their Indonesian peers for Christ. Each year, this group  has expanded in size – from a handful in 2013 to more than 20 this coming summer. College students are themselves recruiting others for mission work, helping friends and members from their own churches catch a vision for making disciples around the globe.

Each year, Perkins has challenged mission teams to Indonesia to embark on their short term trips with a “long-term commitment.” But what does this look like?

Well, it looks like Perkins’ encounter with a young Indonesian man during his first trip to the country. While rock climbing with Perkins, this young man learned that his father had a stroke and invited Perkins to go to the hospital with him. Then, during mission trips in the following years, Perkins held up his new friend as it seemed “everything in life was taken from him”; his friend mourned the passing of both his parents and had his father’s business taken from him. Happily, Perkins was also able to celebrate with his friend this January, taking a special trip to Indonesia to attend his wedding.

Although his friend is not yet a believer, Perkins is hopeful.

“It’s going to happen one day,” he said. In the meantime, he’ll stay in contact with his friend, not only by traveling to Indonesia consistently, but also by taking advantage of modern technology – email and social media platforms like Facebook or Twitter.

Indonesia is “a massive, massive mission field,” said Jake Smith*, another St. Louis area minister. On seven mission trips that teams from his church have gone on, the mission has been simple: to spread the gospel broadly.

But, like Perkins, Smith and others from his church have a longterm commitment to Indonesia. In fact, one couple from his church will soon go on mission to Indonesia full-time, and all the teams that go on short-term mission trips in the country strive to connect new or potential believers with Christians in Indonesia who can continue to work with them. But, for Smith, the longterm commitment to missions once involved his family taking an Indonesian woman into their Missouri home while she tried to reconcile with her American husband and child.

Although Indonesia is the most populous Muslim country in the world, Smith says that “God has opened a door” there for making disciples – and Missouri Baptists in St. Louis are committed for the long haul to transform lives and communities there.