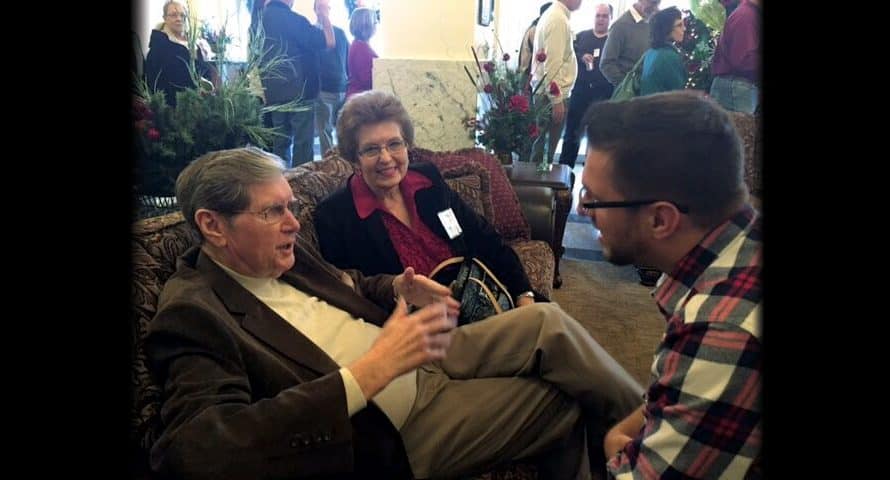 JEFFERSON CITY – Executive Board members Larry Lewis – sitting alongside his wife, Creda – and Spencer Plumlee chat before a luncheon at the board’s meeting here, Dec. 15. Lewis and Plumlee serve together on the Inter-Agency Relations Committee for the board. Pathway photo.

JEFFERSON CITY – During their Dec. 14-15 meeting here, the Missouri Baptist Convention (MBC) Executive Board again affirmed the direction of the MBC, under the leadership of Executive Director John Yeats, to reorient its staff around its mission to “make disciples, multiply churches, and develop leaders.”

During the meeting, the board also approved the 2016 executive board budget of $14.8 million and approved the donation of more than $28,000 to the Mission Dignity program.

The executive board affirmed the reorientation of MBC staff, so as better to achieve its vision of “transforming lives and communities with the gospel” and its mission of “cooperating with Missouri Baptists to make disciples, multiply churches, and develop leaders.”

As previously announced during the MBC annual meeting in October, Executive Director Yeats said that the MBC will no longer consist of eight separate teams, but rather of one team led by five ministry catalysts, who will ensure that the MBC’s financial, ministry and human resources are deployed in the best ways possible to advance the convention’s vision and mission. The five ministry areas are the Executive Office, led by the MBC executive director, as well as Ministry Support, Making Disciples, Multiplying Churches, and Developing Leaders.

The executive board affirmed the reorientation of the MBC staff during discussions on Monday evening, Dec. 14.

During their meeting, the executive board also approved a 2016 executive board budget of more than $14.8 million—an increase from the 2014 and 2015 budgets, which were both set at $14.5 million.

According to the 2016 budget, 5 percent of the 2016 CP goal of $14.8 million is set aside in a “shared expenses” category, which is allocated for annuity protections and The Pathway. This has been part of the allocation since 2012. From the remaining CP funds, 42.5 percent goes to Southern Baptist Convention (SBC) ministries, 41.5 percent is allocated to MBC missions and ministries, and 16 percent is allocated to MBC institutions, including the Missouri Baptist Children’s Home, Hannibal LaGrange University and Southwest Baptist University.

United States Senators have a last chance to block threats to religious liberty brought about by the so-called “Respect for Marriage Act.” As such, faith-based policy experts are calling Christia