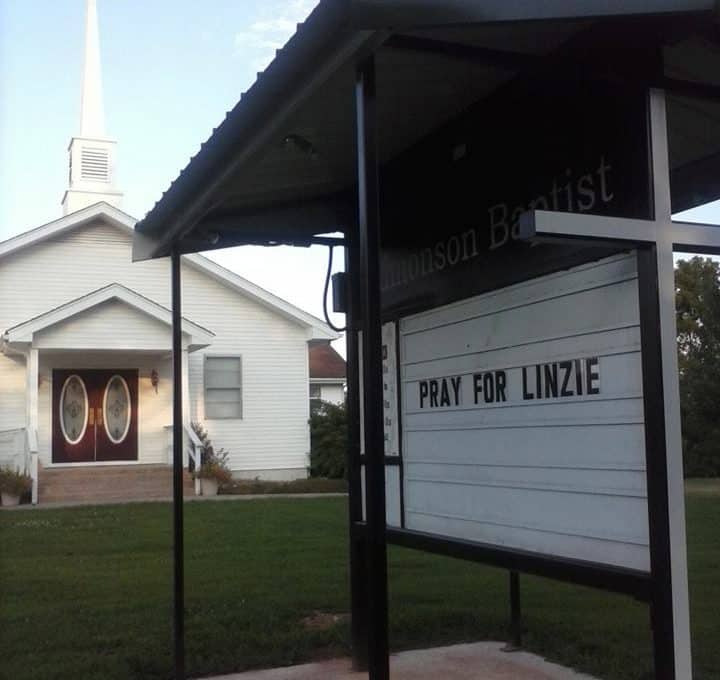 LINCOLN – Excruciating pain overwhelmed her motionless body with every breath she took. Nineteen-year-old Linzie Green knew that each time she took a breath, it might be her last.

“Do you know Jesus?” she asked one of the emergency medical technicians who arrived on the scene of the accident.

Later while strapped to a gurney, she asked the same thing to a paramedic in the helicopter, “Do you know Jesus? He saved me.”

“I honestly thought I was dying so every time I woke up and realized I wasn’t dead and I had people around me, that was the first question I asked,” said Linzie.

“She asked it so much that it kind of became a running joke at the hospital,” said Rex Green, Linzie’s father and pastor of Edmonson Baptist Church in rural Benton County. “It was like she made the decision deep inside her, ‘If I’m going to die, I will die with a witness on my lips.’”

On July 16, 2015, Linzie’s car went off the road and through a fence, crushing the car’s front support and causing the roof to hit her head so hard that it broke four vertebrae in her neck. The fence was electric, so the car and Linzie became electrically charged. Linzie’s boyfriend, Alex Griffith, and his young nephew were also in the car.

“Alex was literally knocked out of his shoes from the impact and was groggy, but Linzie was able to get his attention so he could get the baby out of the back of the car,” Green said. “He got the baby out and went back for Linzie. However, each time he touched the car or Linzie, he was shocked.”

Green said he kept fighting through the pain and was able to get Linzie’s seatbelt loose, allowing her to breathe and, likely, saving her life. Meanwhile, Linzie couldn’t feel anything below her armpits. Then people started showing up.

“It was a remote area and people started showing up out of no where and with no explanation,” Green said.

Emergency personnel were able to free Linzie from the car, where she was immediately whisked away via helicopter to continue the fight to stay alive.

Green said the next 40 days were the longest and most difficult time of trial and suffering his family had ever endured.

“Linzie was in and out of surgeries and stayed in Surgery and ICU, always heavily medicated and sedated,” he said. “Someone had to be with her constantly in case the hospital needed a signature for something else that needed to be done. So many ups and downs … it was oftentimes aggravating, but mostly just wearing.”

He said one thing his family discovered during that dark time was that there is a whole other community that forms inside a hospital waiting room.

“It’s like you’re just outside the funeral parlor’s door and everyone there with you has their own fears, concerns and needs,” he said. “Much of the time there isn’t a chaplain present so I tried to minister the people who were around me. Some rejected the Scriptures I shared, but most welcomed the comfort. It was a different kind of church environment, but ICU is a place where lives are saved and great hope is found.”

However, Green said one of the most joyous moments was when Linzie was finally released from ICU. But though she continued to get stronger, Linzie and her family still had to cope with the reality that Linzie was paralyzed from the waist down. She might never walk again.

“I know Jesus saved me spiritually, but I also know he saved me physically,” Linzie said. “We’ve had several hard talks about why this would happen, but I believe that He’s given me a new purpose.

She said before the accident she had opportunities to serve at two churches, Edmonson Baptist and her boyfriend’s church. She said she would often make excuses about long shifts and late nights at work or big projects due for school. In her mind, there was never enough to time to serve like she felt the Lord leading her.

“Now all of a sudden, I have all the time in the world,” Linzie said. “While I don’t believe God caused this accident, I definitely think He is using this accident to make me realize the things He has in store for me that I need to take care of.”

She also has a much greater understanding of God’s church and how He uses them in big and small ways to make a huge impact on earth.

“My family, my church family, hospital personnel and people I don’t even know have been so supportive, and I can see the love of Christ in a lot of people,” Linzie said. “We had an event recently that I was going to and things were pretty hectic. We asked a member of my church family to come over and fix my hair really quick. You wouldn’t think that was a big deal, but her willingness to drop everything and come put my hair up in a ponytail showed amazing love.”

Green said God definitely provided love and encouragement and tangible gifts through his people, and he is certainly thankful, but God also revealed His presence in an unexpected way.

“I felt God’s hand on me throughout this time by what he was doing in and through Linzie’s 16-year-old brother and my son, Hunter,” Green said.

He said for many months while he practically lived at the hospital and his wife and the kids’ stepmom, Ann, picked up extra hours at work, Hunter went to school, worked and came home to an empty house. He took care of the house, the laundry, the dog, and all while dealing with his own grief and stress.

“As much as I wanted to be with Linzie, I hated that Hunter was alone,” Green said. “The Lord gave me peace and reminded me, oftentimes through Linzie, that God’s got this. I’m amazed at what God did through Hunter. When I couldn’t be there for him, people from the church were there checking on him and asking him, not just about how Linzie was doing, but about how he was doing.”

He said when you’re in the middle of a storm, though it’s a temporary situation, you