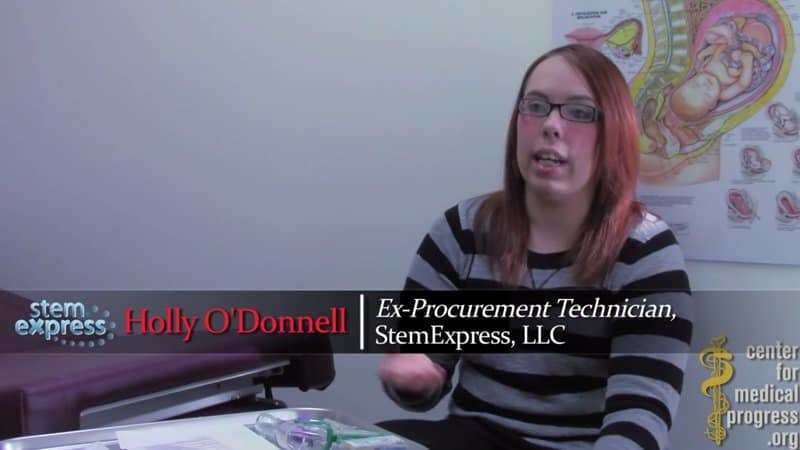 Former Technician Holly O'Donnell, of biotech company StemExpress, speaks with the Center for Medical Progress about the alleged harvesting and selling of aborted baby parts by Planned Parenthood.

NAPA, Calif. /Christian Newswire/ — In a tremendous legal victory today, Judge O’Donnell reversed the previous court order that prohibited the Center for Medical Progress (CMP) from releasing any video from a conversation with Catherine Dyer and other Stem Express employees that took place on May 22. The court noted that even if Stem Express prevails on their Penal Code 632 cause of action, “there is nothing in [that code section that] prevents the publication of information unlawfully procured through unlawful privacy violations.”

Judge O’Donnell emphasized the importance of Daleiden and the CMP’s Constitutional rights in this case stating that “the proposed injunction would be a prior restraint on Defendant’s right to free speech under the First Amendment.” This ruling paves the way for Daleiden and the CMP to publicize the conversation with Dyer and to continue to expose the ugly truth of fetal organ harvesting.

Catherine Short, Vice President of Legal Affairs for the Life Legal Defense Foundation and attorney for Daleiden and CMP commented on the court decision stating, “The legal impact of today’s ruling is huge, not only for the sake of exposing the truth about the secretive and lucrative business of trafficking fetal organs, but it is also a remarkable victory for free speech advocates.”

The sale or purchase of human fetal tissue is a federal felony punishable by up to 10 years in prison or a fine of up to $500,000 (42 U.S.C. 289g-2). Federal law also requires that no alteration in the timing or method of abortion be done for the purposes of fetal tissue collection (42 U.S.C. 289g-1). Additional videos by Daleiden and the CMP should provide more evidence against Planned Parenthood and Stem Express. Judge O’Donnell’s message will hopefully ring loud and clear that we as Americans have the right to engage in undercover journalism and expose the criminal actions of those who brazenly violate the law.

This is only the beginning of the battle to fight for truth. In the most recent video released by the CMP, we learned that Stem Express employees harvested organs from a late-term baby whose heart was still beating.

In the aftermath of the reversal of Roe v. Wade, the Missouri Baptist Children’s Home is standing firm in its efforts to give help, hope and healing to parents and children