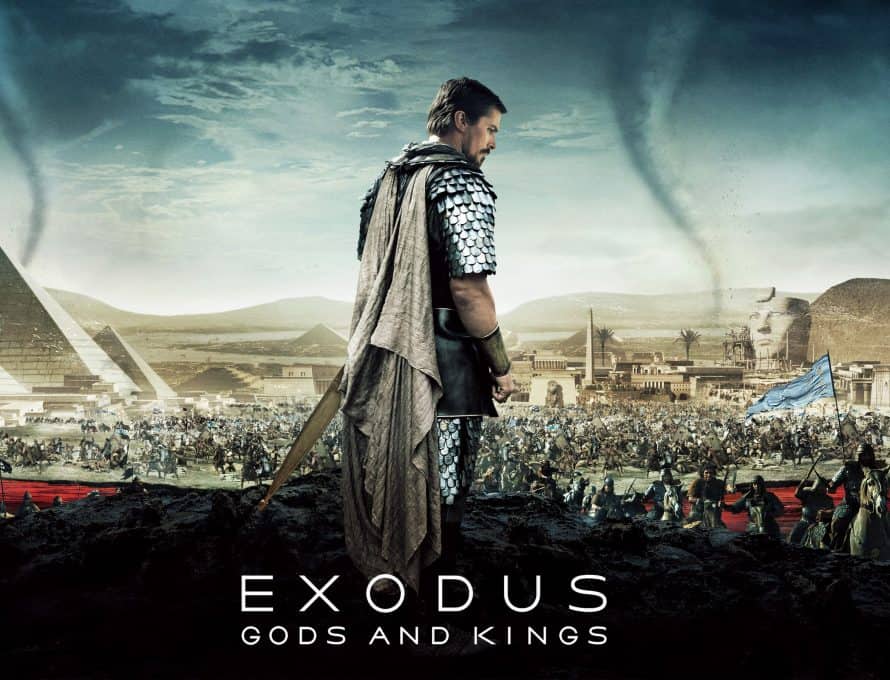 It’s impossible to watch Exodus: Gods and Kings and not compare it to two movies: this spring’s Noah and the 1956 classic, The Ten Commandments. You get no points for guessing this modern action epic falls short of the Charlton Heston/Yul Brynner masterpiece, but I was disappointed that it didn’t even rise to the much lower bar set by Noah. Whereas Noah was a decent movie underneath the layers of extrabiblical story, Exodus retells the biblical account in its own odd way without even giving us the satisfaction of being a good movie.

Christian Bale, who plays Moses made headlines when he called Moses “barbaric” and “likely schizophrenic.” I’m not sure how Bale arrived at that conclusion, but he certainly plays the leader of the Hebrews as such. But then I suppose that makes sense when the script calls for Moses to get bonked on the head by a falling boulder prior to seeing the burning bush on Mount Horeb. This makes the burning bush (and the young boy with a British accent who represents God) a hallucination, not a literal event; but you’ll make yourself dizzy trying to catalog the biblical inaccuracies. Did I mention that Moses does not remove his shoes since he is “standing on Holy ground” but is instead up to his neck in quicksand?

A few more ways it does not lineup with the biblical account (but by no means an exhaustive list):

• The plagues occur without Moses’s warning, and are more a result of hungry crocodiles than God’s intervention.

• The story is much more about political intrigue than God’s provision.

• Moses’s staff gets the short shrift, in favor of his and Pharaoh’s twin swords.

• Moses abandons his wife in Midian

• Moses is less the reluctant leader and more a guerilla insurgency general.

I don’t demand that a Hollywood version of a biblical story 100 percent true to Scripture. I get that when you hire Christian Bale as your lead, you want him speaking directly to Pharaoh, not “slow of tongue” and communicating through Aaron. But some things in God’s Word are so incredible they do not need any dramatic embellishment. Special effects have improved so much since 1956; how visually interesting it would have been to see director Ridley Scott’s vision of the pillar of cloud by day and pillar of fire by night! Instead God’s presence is totally absent on the journey out of Egypt. Was the biblical parting of the Red Sea not exciting enough? Instead Scott has the Israelites cross on muddy land as tornadoes hold back the sea, only to have Moses and Pharaoh both swept up as the waters return.  Spoiler alert: both men survive.  Cecil B. DeMille’s Ten Commandments took liberties as well, but at least it was artful, thoughtful and respectful.

But the saddest thing is that Exodus’s God is merely an impersonal force that only occasionally appears to Moses as the aforementioned British boy. Missing is God reassuring Moses every step of the way and His careful instruction and intervention on behalf of His people. To the Israelites, God may as well not be there, in contrast to scripture that reminds us that He stayed by their side: “The pillar of cloud by day and the pillar of fire by night never left its place in front of the people” (Exodus 13:22). Noah is guilty of edging out God as well, only occasionally referring to an unknown Creator. How curious that Hollywood enjoys retelling biblical sagas but tries so hard to remove the central figure! They want the story but not the Truth.

Godly men and women can disagree, but I found a few random redeeming qualities in Noah in spite of itself and I thought the message of God’s providence and man’s sin shined through. Exodus? The highest praise I can offer is that I happened to get free popcorn.

A final note: Exodus is rated PG-13. While it is not the goriest movie ever, there are some intense battle scenes and the plague scenes are suitably creepy.