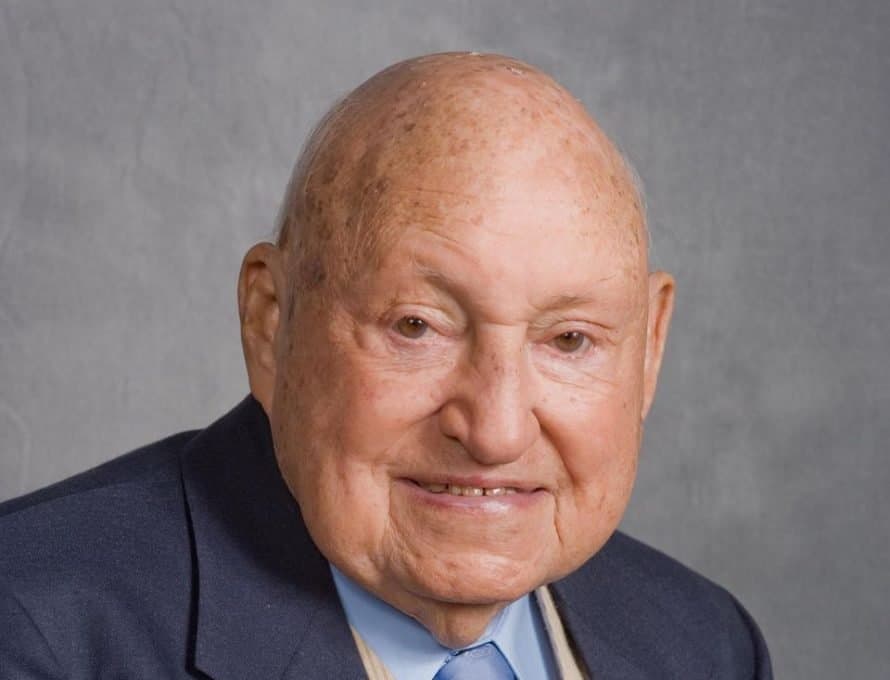 ATLANTA (BP) — S. Truett Cathy, founder and chairman emeritus of Chick-fil-A, died today (Sept. 8) at 1:35 a.m., according to an announcement from the Atlanta-based restaurant chain. Cathy was 93.

Baptist Press will post a broadened obituary later today. This story includes information from company-released obituary follows of Cathy, a Southern Baptist churchman known for his commitment to Chick-fil-A restaurants being closed on Sundays.

Cathy, who died peacefully at home surrounded by loved ones, was born March 14, 1921, in Eatonton, Ga., moving to Atlanta with his family at age 4.

In 1946, Cathy relied on a keen business sense, a strong work ethic and a deep Christian faith to build a tiny diner in the Atlanta suburb of Hapeville. He developed it into Chick-fil-A, which today has the highest same-store sales and is the nation’s largest quick-service chicken restaurant chain based on annual system-wide sales. It was at the original restaurant that Cathy created the sandwich that became the company’s signature item.

Credited with creating the original Chick-fil-A Chicken Sandwich and pioneering in-mall fast food, Cathy built one of the nation’s largest family-owned companies, as Chick-fil-A reached $5 billion in annual sales in 2013. Currently, there are more than 1,800 Chick-fil-A restaurants operating in 40 states and Washington, D.C.

Cathy’s oldest son, Dan, became president of Chick-fil-A in 2001, and chairman and chief executive officer in 2013, while Truett Cathy continued in the role of chairman emeritus until his death.

Cathy was a devout Southern Baptist who taught Sunday school to 13-year-old boys for more than 50 years. As an extension of the founder’s faith and the clearest example of incorporating biblical principles into the workplace, all Chick-fil-A restaurants operate with a “Closed-on-Sunday” policy. Rare within the food service industry, this policy allows employees a day for family, worship, fellowship or rest, and also underscores Cathy’s desire to put principles and people ahead of profits. Chick-fil-A will remain privately held and closed on Sundays.

Ronnie Floyd, president of the Southern Baptist Convention, said Cathy “lived before the entire world a strong commitment to faith, family and work. His convictional leadership not only built a great family, but also one of America’s most phenomenal companies.”

Floyd, pastor of Cross Church in northwest Arkansas, said he will never forget Cathy’s address at a regional business summit several years ago. “To this day, it remains the largest crowd we have had in our 12-year history. His life, legacy and personality captivated the audience.”

Frank S. Page, president of the SBC Executive Committee, said he was “privileged to meet with Truett Cathy on several occasions. I deeply appreciated his stand on Christian convictions. Most of all, I admired his tenacity and faithfulness, especially exhibited in teaching young boys at First Baptist Jonesboro, Ga. His example of steadfastness and commitment to teaching the Word of God is an example to us all.”

Cathy was often quoted as saying: “I’d like to be remembered as one who kept my priorities in the right order. We live in a changing world, but we need to be reminded that the important things have not changed. I have always encouraged my restaurant operators and team members to give back to the local community. We should be about more than just selling chicken; we should be a part of our customers’ lives and the communities in which we serve.”

Cathy’s business approach was largely driven by personal satisfaction and a sense of obligation to the community and its young people. His WinShape Foundation, founded in 1984, grew from his desire to “shape winners” by helping young people succeed in life through scholarships and other youth-support programs. In addition, through its Leadership Scholarship Program, the Chick-fil-A chain has given more than $32 million in financial assistance to Chick-fil-A restaurant employees since 1973.

As part of Cathy’s WinShape Homes program, 13 foster care homes were launched and operated by Cathy and the WinShape Foundation to provide long-term care for foster children within a positive family environment. WinShape Homes has provided a safe and secure home to more than 450 children in which they could grow physically, spiritually and emotionally. WinShape Camps was founded in 1985 as a residential, two-week summer camp to impact young people through experiences that enhance their Christian faith, character and relationships. Each summer, more than 18,000 campers attend WinShape Camps.

In 2003, Cathy helped his son and daughter-in-law, Bubba and Cindy, celebrate the opening of WinShape Retreat, a high-end retreat and conference facility located on the campus of Berry College in Rome, Ga. The multi-use facility hosts marriage-enrichment retreats along with business and church-related conferences, and in summer months houses WinShape Camp for girls, directed by Cathy’s daughter, Trudy Cathy White.

In addition to presiding over one of the most successful restaurant chains in America, Cathy was a dedicated husband, father and grandfather. He is survived by his wife of 65 years, Jeannette McNeil Cathy; sons Dan T. and Don “Bubba” Cathy; daughter Trudy Cathy White; 19 grandchildren and 18 great-grandchildren.