ROCHDALE, Mass. (BP) – At a celebration marking its 275th anniversary, Greenville Baptist Church in Rochdale, Mass., received a rare gift: a book from 1764 containing a handwritten note from the church’s founding pastor.

The book, a pharmaceutical manual, was uncovered in 1968 when Ira Greenstein was serving as a summer camp counselor and in his free time visited a used bookstore in Springfield, Mass. He picked up the manual from a box of old books and bought it along with a book on social studies from the 1890s.

Greenstein, now a cantor at Beth Am Synagogue in Baltimore, Md., told Baptist Press he was fascinated to learn from the book how medicine was practiced in the colonies. 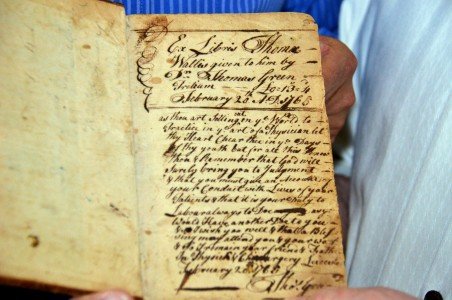 ROCHDALE, Mass. – A handwritten note from Thomas Green, a physician, to Thomas Wallis, presumably his apprentice, charged him to “remember that God will surely bring you to judgment and that you must give an account of your conduct with lives of your patients.” The pharmaceutical manual printed in 1764 recently was returned to the church founded by its original owner.

“This tells you what potions to apply and how to mix up things for various ailments that you have,” Greenstein said. “The description of the four elements: air, water, earth and fire – this was before they had physics and before they had chemistry.”

Aside from his interest in the subject, Greenstein knew someone must have a connection to the original owner of the book. Written in ink in the front of the book was a note from Thomas Green, presumably a physician, to Thomas Wallis, possibly his apprentice.

Greenstein searched on and off for years for someone connected to Green or Wallis, but he was unsuccessful until this year when a medical archivist at Johns Hopkins University discovered that Green also was a minister who founded Greenville Baptist Society in Leicester, Mass., the sixth Baptist church in Massachusetts.

“It was founded as the Greenville Baptist Society because at that time in American history the Congregational church was the only approved church,” Jim Wideman, executive director of the Baptist Convention of New England, told Baptist Press.

It was clear from the inscription, Greenstein said, that Green “had a very strong attachment to some church and was passing that on as a responsibility to his apprentice, that God would hold him to account for the work he did in medicine, which seemed consistent with colonial America.”

Green was a pioneer in central Massachusetts, Wideman said, serving as a legislator as well as a physician and a pastor.

Once Johns Hopkins uncovered the connection, Greenstein contacted Wideman, who recently completed a two-year intentional interim at the church, to ask if the congregation would like to have the book. It would be the first original document from the founder. Letters in their possession were copies, Wideman said.

In something Greenstein described with the Yiddish word beshert – “it was meant to be” – he and Wideman met to exchange the book June 10 in Baltimore. Greenstein lives in Baltimore, and Wideman was there for the annual meeting of the Southern Baptist Convention June 10-11.

The timing, the two said, was providential also because Greenville Baptist Church, the congregation that began as the society founded by Green, would be celebrating its 275th anniversary June 22.

Greenville Baptist Church was affiliated with American Baptist Churches (ABC) USA for much of its history but joined the Southern Baptist Convention in 2011, Wideman said.

“The church has always stood strong on the Word of God and has always been biblically conservative,” Wideman said. “In the late ‘80s and ‘90s especially, as the convention that they were a part of began to change, they felt more and more isolated.”

Greenville Baptist Church also had been for decades an integral part of a local ministerial association, but about 10 years ago, the church “took a stand against the installation of a homosexual clergy person in one of the local churches and felt like they had to leave the ecumenical clergy association, which isolated them even more,” Wideman said.

“As they continued to stay strong on Scripture, it just distanced them further and further from ABC.”

When the church’s pastor retired a few years ago, Greenville Baptist considered five different Baptist groups and chose to affiliate with the Southern Baptist Convention “mainly for our biblical, conservative stand and the importance that we placed on Scripture,” Wideman told Baptist Press.

Having led the church through an intentional interim process for more than two years, Wideman stepped aside June 22 as the church installed a new pastor, Stephen Derrick from California, at the 275th anniversary celebration.

The church met in two services that day in its chapel built in the 1860s, Wideman said. The original pipe organ was refurbished recently and was used for the celebration, which drew about 275 people. Five former pastors were there, and three others sent greetings by video or letter.

Green’s pharmaceutical book was presented to the church during a dinner following the services, and former pastors and longtime members shared memories of God’s faithfulness through the years.

“I had quite a few people come up to me, amazed at the age of the book,” Wideman said. “They were very excited that we had something now in our possession that the founder of the church had actually signed and possessed.”