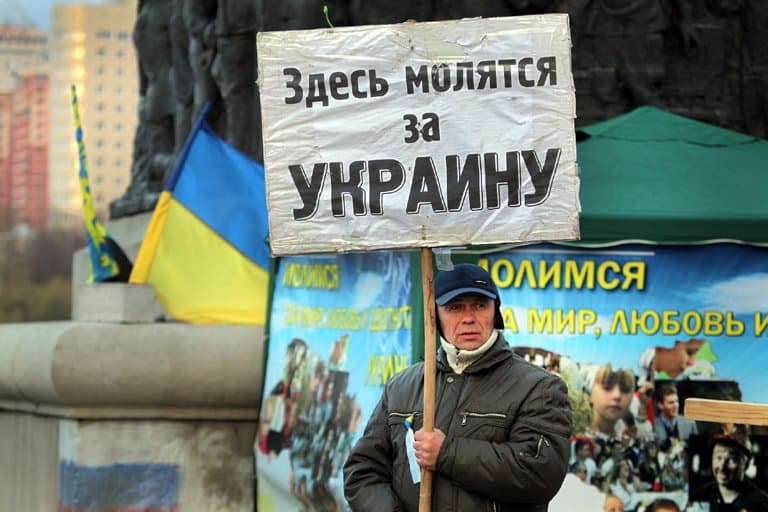 KIEV, Ukraine (BP) – The Ukrainian crisis has kindled an interdenominational prayer movement in the nation, said a Southern Baptist evangelist who ministers there and has accepted an invitation from Ukrainian Baptists to preach on a national day of mourning in Kiev.

Ukrainian Christians believe only God can protect the nation from Russian control in the midst of upheaval that led to the ouster of President Viktor Yanukovych in February, said Michael Gott, who has been ministering in Ukraine nearly 40 years.

“The churches, the Orthodox Church, the Catholic Church, the evangelicals, the Baptists and the Pentecostals are now having prayer meetings together, asking God to intervene in their nation’s history – and it is an atmosphere of holy desperation,” Gott told Baptist Press.

“They are saying, ‘God, if You don’t help us, we’re down the tubes. We’re facing a collapse of our whole nation.’

“What [the revolution] has caused is an amazing thing,” said Gott, a Texas-based evangelist who spends up to six months a year in Eastern Europe. His latest trip to Kiev was in February and March of this year through his Michael Gott International evangelistic association.

Gott is scheduled to preach an April 27 sermon commemorating the estimated 100 people killed when Yanukovych was ousted from power. Details are still being finalized for the event expected to draw up to 50,000 Ukrainians and to be televised nationally, the result of the new government declaring the service an official religious and cultural event, Gott said.

“They want me to preach a message on this special day,” Gott said. “It is a national day of mourning for all of the people that were killed by the snipers during the Ukrainian revolution when President Yanukovych was removed from office and he ordered snipers to come out and shoot people. Roughly 100 people were shot and they’re going to have a time when the nation comes together to mourn the horror of all of this.

“Because I’m going to be there preaching a rather large evangelistic event, I was invited to speak,” Gott said. “The Ukrainian people not only want to do this memorial for these people who died, but we’re going during their Easter celebration which adds a dimension to this, and it’s one of the reasons they expect the crowds to be so large.”

Vyacheslav Nesteruk, president of the Baptist Union of Ukraine, and several other Baptist leaders invited Gott to preach after he was already scheduled to tour western Ukraine with the Arkansas Master’Singers April 21-May 2.

Gott will arrive in Kiev ahead of the choir to meet with Baptist leaders and celebrate Easter with his membership church there, Dom Evangeliya (House of the Gospel) Baptist Church, pastored by Vitaly Kozubovsky.

“This invitation came to us from the Ukrainian Baptists themselves,” Gott said. “We’ve [Michael Gott International] been going there for many, many years and they asked us to come.” The trip could still be cancelled if the political climate changes in Kiev and western Ukraine.

“The fact is the western part of Ukraine is pro-American, it’s pro-European, it’s pro-Western, and so we have had to, almost within 72 hours, reschedule our whole itinerary,” Gott said. “And yet this could be cancelled if there was a military invasion of Ukraine.

“Initially, we were invited to come to Donetsk, which is on the Russian/Ukrainian border, and it got so hostile there, and so inflammatory … that very quickly we had to contact some of our other bishop friends and they said yes, come to western Ukraine,” he said. (Among Ukrainian Baptists, the office of bishop is comparable to the Southern Baptist director of missions.) “So we were closed out of Donetsk, simply because they were fearing there would be demonstrations by these pro-Russian people during the concert. So we’re going to the western part of Ukraine, western Kiev, to do concerts in the major cities.”

Gott will preach at each of eight concerts scheduled for the choir, which is travelling under the auspices of his ministry.

“At a time when most people fear going to Ukraine, because of the possibility of war and the possibility of more … violent reaction on the street, here is a choir from the state of Arkansas that wanted to go with us and do evangelistic concerts in a country at a moment like this. I think is a real tribute to all of them,” he said of the choir. “We will be in the largest halls in several cities, and then we will be in the largest churches and some of the largest halls in the city of Kiev, the capital.”

Gott’s evangelistic event at a Kiev church in March drew over 400 professions of faith in Jesus, despite ongoing tumult with Russia over the Crimean peninsula and elsewhere in Ukraine, Gott told Baptist Press

“Even in the midst of that revolution, while it was all taking place, we were seeing an incredible response. Ukrainians desperately are aware that they need God with a sense of desperation. They are desperate to find God in this crisis mood of this hour.”

God is creating good from the tragedy, Gott said.

“Even in this difficult time for Ukrainian history,” Gott said, “I believe God is working out His purpose, and that good can come of this.” ν