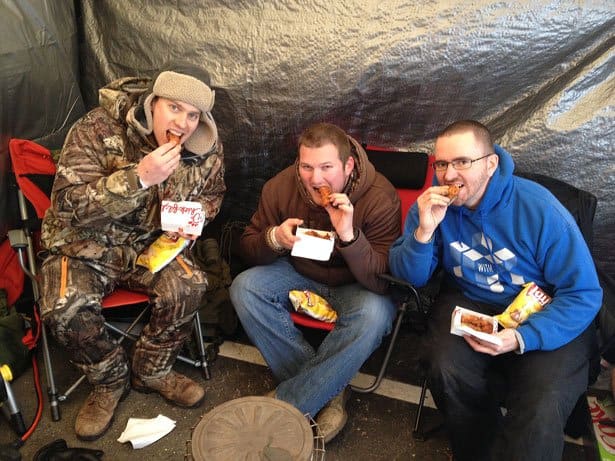 Three members of Concord Baptist Church (from left, Gerad Fox, CR Miller and Chris Rhodes) were among those that camped out in sub-freezing temperatures.

JEFFERSON CITY – Three members of Concord Baptist Church here (from left, Gerad Fox, CR Miller and Chris Rhodes) were among those that camped out in sub-freezing temperatures for 24 hours prior to the opening of Chick-fil-A’s newest store at 6 a.m., Jan. 23. In addition, the restaurant gave out 52 coupons for free chicken sandwich combos to those camping out. The restaurant continued to feed them while they were waiting for the store to open in temperatures that dipped to as low as zero the night before.

The company, led by its owner and Chief Executive Officer Dan Cathy, are known for their Christian, pro-family values. Chick-fil-A garnered headlines in recent months after Cathy commented that he opposed homosexual marriage. Homosexual groups and the liberal news media went beserk, but the company was defended by pro-family and religious groups that helped it reach record sales in the days following the initial controversy. Chick-fil-A restaurants have always been closed on Sundays, so their employees could worship and be with their familes. Cathy is a member of New Hope Baptist Church in Fayetteville, Ga. There are now 26 Chick-fil-A restaurants in Missouri.