STRAFFORD—The Creation Ministries of the Ozarks (CMOTO) museum here has drawn about 600 visitors since it opened in January as creationism in Missouri begins to sling a stone at a menacing Goliath known as evolution.

Justin Nelson sits on the Missouri Baptist Convention (MBC) Executive Board. He is a pastor at South Creek Church in Springfield, which is one of CMOTO’s biggest financial supporters at $5,000 per year. Nelson was one of seven museum friends present June 28 for a small group discussion of current trends and future ideas linked to true science penetrating the marketplace.

Joining Nelson around the circle were two board officers, a young married couple who are teachers, the museum’s president, and a member of the museum’s advisory board. They are united in their belief that Genesis 1-11 is literal, direct, and meant to be understood in a young earth context.

Many pastors and laity with whom they interact believe in theistic evolution, which is the idea that God made the universe billions of years ago with the ability for it to evolve into our present reality. Couple this with a secular academic hierarchy that promotes evolution as absolute truth and you have a CMOTO group that thinks counter-culturally and delves deeply into the Bible for its motivation.

“When you’re persecuted, leap for joy,” said Rod Butterworth, museum president. “It is a form of persecution.”

The museum is set up in such a way where the Gospel story is told early and clearly as a means of explaining the science. For the group gathered June 28, it is a reminder of who they are as Christian leaders in CMOTO—teachers of the Word who are introducing people to the King of all the sciences, Jesus.

“I want to be accused of one thing—telling the truth of God’s Word, regardless if man says I’m stupid,” Nelson said. “The Bible tells us that they’re going to look at us as being foolish for teaching the Word of God. I’m fine with that.”

The reward of this outside-the-church-walls ministry is that the unsaved and the unchurched often come their way. For example, on May 22 a group of 17 atheists visited the museum and interacted with CMOTO ministers in a cordial manner. Curtis Baker, secretary/treasurer for the organization, is thrilled when things like that happen.

“When I see people drive from Texas, St. Louis, Oklahoma, Kansas, or whether they’re atheists from Springfield or Branson or Joplin, and they say we want to know how you as a Christian and a creationist explain the Bible and all of these things,” Baker said. “I look at this as a place to come for people who normally won’t go into our evangelical churches. They want to come here and start at the ground level and say, ‘Show me how.’ We have the opportunity to take somebody from A to Z, from creation all the way to Christ.”

Ron Walser, who sits on the advisory board of the museum, said the group is united by the belief that we as Christians are losing our children to the culture. As they move forward in Christ, confident that they can stand up to evolution in southwest Missouri and see God bring them the victory, they like to remind themselves that they are fighting for future generations.

“None of us picked creation as the battleground,” Walser said. “The enemy has. Satan is using the false science of man to steal away our kids, and all of us need to take a stand.” 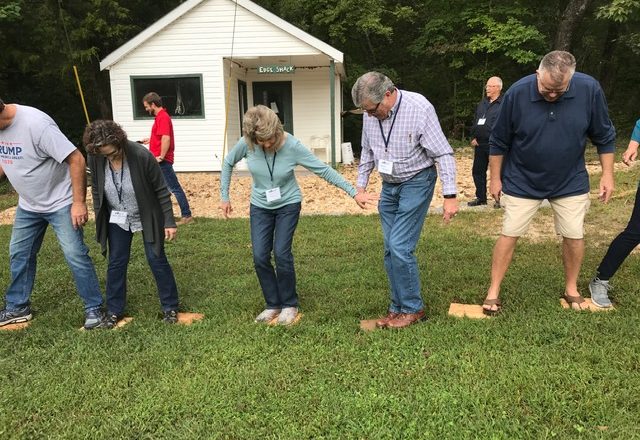 The Windermere conference center was the setting for the semi-annual retreat of Missouri directors of missions (DOM).  The Sept. 22-23 meeting saw about 50 DOMs attend.  Many remarked it was the first time they had been at the center in over 20 years.