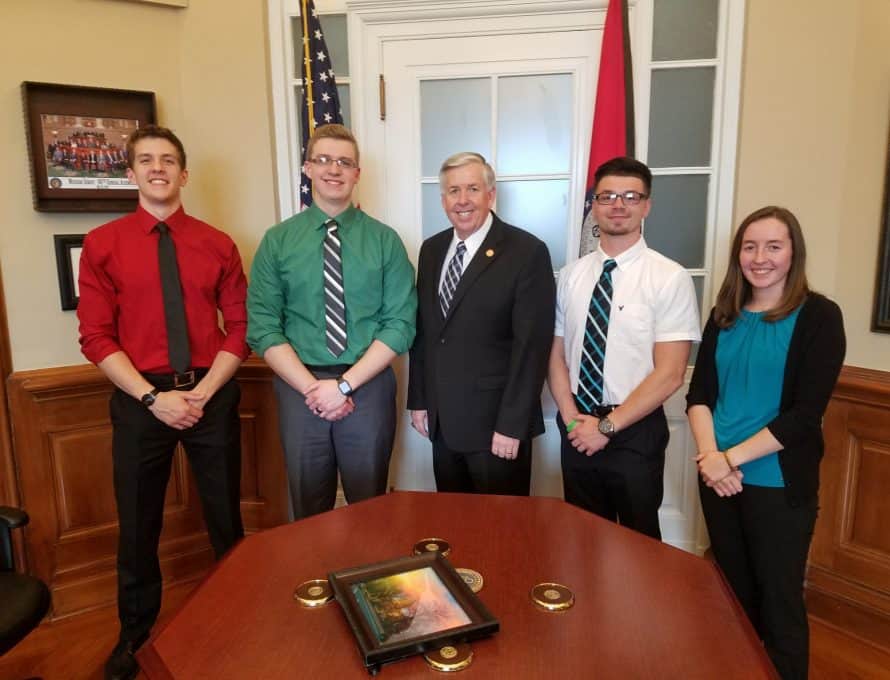 The students met with Missouri Lt. Gov. Mike Parson in February to present the design of their mobile application for the state fair.

“This is our first senior project with the Missouri state government, but so far, it has really been a great experience for our students,” and Dr. Tim DeClue, CIS department chair.

The Missouri State Fair, which will be held from Aug. 10-20, is one of the largest tourist attractions in the state of Missouri. According to the Missouri State Fair website, the fair attracted more than 350,000 visitors in 2016, and has been recognized as one of the premier agriculture showcases in the world by the International Association of Fairs and Expositions.

This year, the State of Missouri, the Missouri Farm Bureau and the Southwest Baptist University Computer and Information Sciences Department have teamed up to make the fairgrounds easier to navigate.

SBU CIS seniors Kelli McNabb of Clever; Andy Johnson of Piedmont; Mason Peck of Republic; and Jake Miles of Bolivar collaborated to design a mobile application, which fairgoers can use to navigate the fair’s attractions. Among other features, the app will allow users to search for categories of attractions and then be directed to where those attractions are on the fairgrounds.

“I often tell our students that computer science is a great way to help people,” DeClue said. “This app will definitely help people find what they want to see at the fair. And, particularly for the very old or very young, finding what you want to see easily and without mishap in Missouri’s August heat is a great help.”

The mobile app has attracted significant attention. The team was invited to unveil their mobile app for Lt. Gov. Parson. In addition, the team also received a tour of the Office of Administration and a visit to the Missouri Capital Building.

“This app will be a huge benefit to the citizens of Missouri and all the visitors to the state fair,” Parson said. “Most of the buildings up there are all on the historical register and you’re going to connect people to the history of the state fair and the fairgrounds. There is a lot of unique history to that.

“When your team is thinking of the scope of the fair, you’re only thinking of 10 or 11 days, but the state fair is much more than that. People from all over the United States come there every year, and if they’ve got your app, somebody’s going to pull that up and say ‘where is this?’ So, you are going to be using it year round, not just for the 11 days of the fair.”

SBU’s Department of Computer and Information Sciences houses five full-time faculty members, two faculty associates and more than 100 students majoring in computer science, information science or web systems and design. The SBU CIS Department is the recipient of multiple national awards each year, and among evangelically Christian institutions, SBU is one of the leading producers of software engineers in the United States.