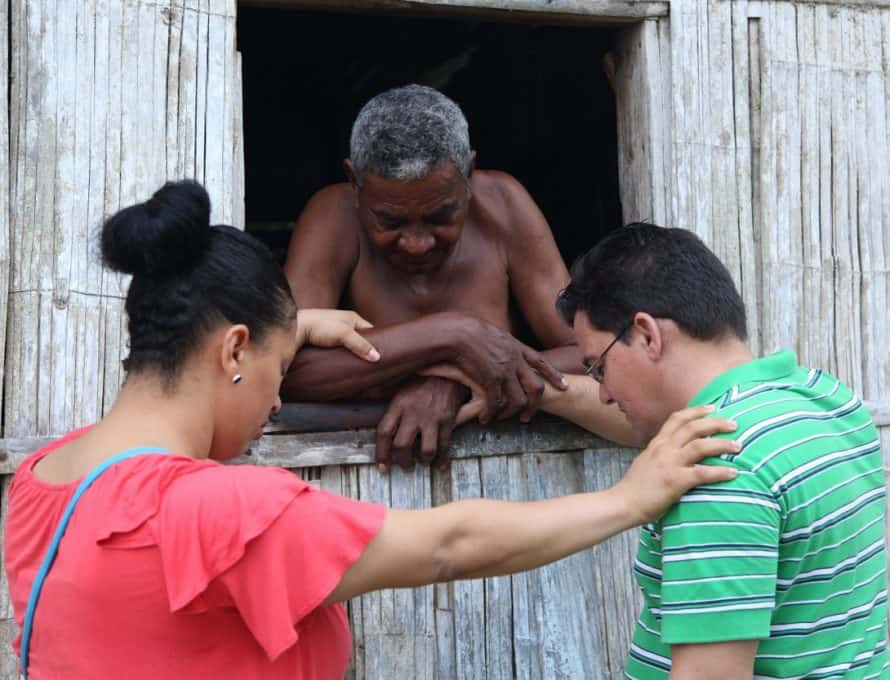 MONTALVO, Ecuador – Cuban Baptist missionaries Javier Carballea and his wife Yaima pray with a man looking out his window while they walk through a neighborhood here. BP photos.

MONTALVO, Ecuador (BP) – The first Cuban Baptist international missionary couple under the Western Cuba Baptist Convention’s Cubans to the Nations initiative has started an evangelical Bible study in an area where there had been none. The missions theme of the convention, “Christ’s disciples making disciples,” has taken root in South America.

About two years ago, International Mission Board missionary Johnny Maust began arranging for partnering mission teams from the U.S. to have lunch at Lupita Diner in Montalvo, Ecuador. He had befriended the owner, Hermida Cabeza, 70, a Christian, and showed a video at the restaurant depicting the Book of Matthew, but he wanted to establish a more consistent presence there.

When Cuban Baptists Javier Carballea and his wife Yaima came to serve with the Mausts, Lupita Diner welcomed them. U.S. missions teams from churches such as Central Baptist Church in Opelika, Ala., also provided names of contacts they had made in the town.

Javier and Yaima spent time at the restaurant to get to know the locals, such as Cabeza’s daughter, Yadira Tello.

Yaima invited Tello to the couple’s apartment to cook together and talk one on one. Tello, 30, became the first person the Cuban couple led to the Lord in Montalvo.

Tello and about a dozen other new believers attend a Bible study that Javier and Yaima started at the restaurant.

“They have had quite an impact,” Tello said about the couple, “because they are always looking after our spiritual growth, they are always teaching us [about prayer], and they are always making sure that our bond gets bigger and that we are focusing on our goal of growing closer to God.”

The Mausts serve among more than 600,000 Afro-Ecuadorians in a geographically large, unreached area of coastal Ecuador that is less than 1 percent evangelical Christian.

“There are other areas we want to reach, but we need the resources and the workers,” Maust said. “To the Cuban convention, I would like to say that we would like to see two or three couples here working together in a group, in a team, to reach the Afro-Ecuadorians.”

There’s a big need for Spanish-speaking church planters, Maust said, not only to share the Gospel but also to stay long term to help people grow and reach spiritual maturity.

“What would Montalvo look like if we had a lot of Javiers and Yaimas working here? It would transform this area,” Maust said. “And I think it would also motivate the Ecuadorians. They would say, ‘Hey, if these guys can do that, why can’t we do that?’”

“With a team, we can reach more people,” Javier said of his and Maust’s dream of a Cuban Baptist church-planting team based in Ecuador. “Why do we need a team? Because I believe there is strength in unity…. There are times when we are down and we need someone to encourage us, to push us, and I think a team can do it.

“It depends on God primarily … and on brothers that can give so that we can come and do this work,” Javier said. “And we are counting on those brothers who can provide support, so that we can [be here] and so that others can come.”

As IMB missionaries, the Mausts are funded through the Southern Baptist Convention’s Cooperative Program and Lottie Moon Christmas Offering for International Missions.

But as Cuban Baptist missionaries, Javier and Yaima are relying on support from Cuban Baptists, as well as individual donations to the Cubans to the Nations strategic project promoted by IMB, to be able to serve in Ecuador. Special projects like this one aren’t included in IMB’s basic budget of Cooperative Program and Lottie Moon Christmas Offering funds but are additional, specific giving opportunities highly strategic to reaching particular peoples.

Javier and Yaima were already traveling evangelists in Cuba, going out to rural areas, often by foot or bicycle, to share the Gospel each week. Javier and Yaima led a church-planting team for their home church, the Iglesia Bautista San Juan y Martínez, in the province of Pinar del Rio, Cuba.

Before Javier knew that he and Yaima would serve in Ecuador as missionaries, Javier named the Cuban church-planting group Punta de Lanza after the 2005 movie “End of the Spear.” The movie chronicled the martyrdom of five U.S. missionaries, including Jim Elliot and Nate Saint, in an Ecuadorian jungle. Since the formation of Punta de Lanza a few years ago, Javier and Yaima helped start two churches and 19 Bible study groups, some of them now mission congregations in Cuba.

They have the same goal in Ecuador. They hope the small group of new believers in Montalvo will spread throughout the region.

“We want to work with that group so that they will help us reach others,” said Javier, in keeping with the Western Cuba Baptist Convention’s missions theme, “Christ’s disciples making disciples.”

“We want to develop disciples,” Javier said, “to get people going out and sharing and making disciples.”

To learn how you can share the Gospel with unreached people in the Americas, email ampconnecting@imb.org.