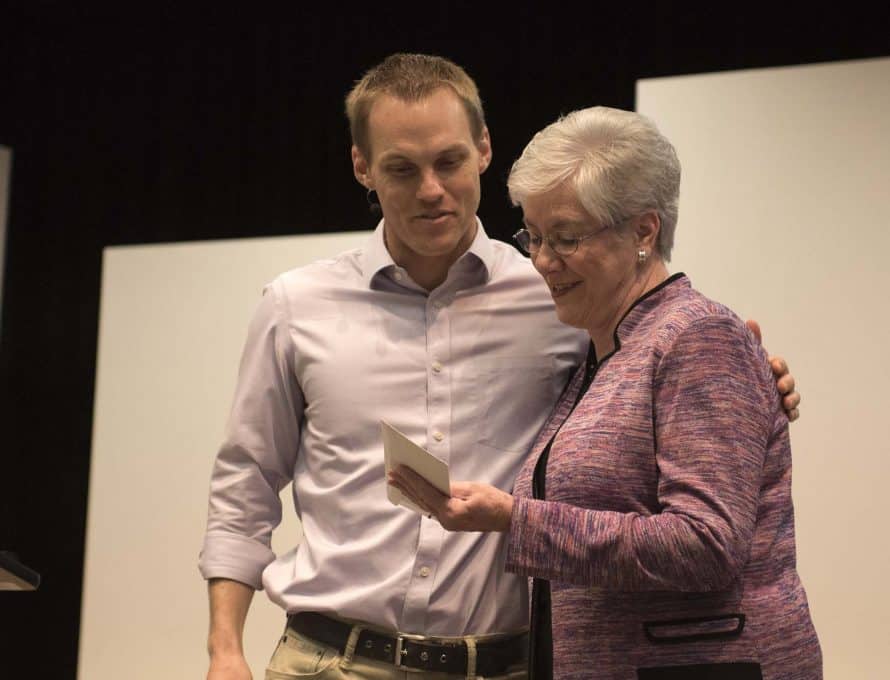 IMB President David Platt recognizes Wanda Lee, executive director of Woman’s Missionary Union, for her partnership in missions as she plans to retire. Platt presented Lee with a gift to The Wanda Lee Joy Fund which benefits a solid financial foundation for the operational expenses of national WMU. IMB Photo.

RICHMOND, Va. (BP) – The International Mission Board is ready to move forward into a future of partnership with churches that empowers limitless missionary teams who are making disciples and multiplying churches among unreached peoples and places for the glory of God, International Mission Board President David Platt told the agency’s trustees May 11.

In addition to hearing this vision for the future, IMB trustees also approved the appointment of 29 new missionaries; recognized the longtime service of two faithful missions servants as they retire; and elected new officers during their May 9-11 meeting near Richmond, Va.

Southern Baptist churches have rallied around the IMB in an unprecedented way to indicate their passion to get the Gospel to people who have never heard it, Platt said, noting Lottie Moon Christmas Offering projections indicate an increase in the 2015 annual offering, which runs through the end of May. Offering totals are reported in early June after the conclusion of the campaign year.

Trustees also presented a resolution in appreciation of a one-time $4 million gift from the North American Mission Board to aid IMB missionaries transitioning off the mission field.

“God is good, and God is gracious, and in all we have walked through, God has been faithful to provide everything we need and, by His grace and in His wisdom, to bring us to a place that we set out to get to nine months ago: a place of short-term financial responsibility and long-term organizational stability,” Platt said. “The stage is now set for God to work in and through the IMB for years to come spreading His grace and His glory all over the world.”

“You look at this in all of history, and it’s humbling, isn’t it, to consider the time and place where God has put you and me?” Platt said, reporting that nearly 3 billion out of 7 billion people right now are unreached – “billions of lost men, women and children have never heard how they can be saved.”

“In light of these realities, our goal is not just to send 100 or 200 more missionaries,” Platt said. “We want to send thousands more missionaries, and the potential for doing that is real. But what that means is that with all of our resources in the IMB, we must work with Southern Baptists to streamline pathways for multitudes of men and women to take this Gospel to the nations in the future.”

“Even with a view toward the future, we are not forgetting the past,” Platt said. “For everything we do in the days to come will involve standing on the shoulders of those who have gone before us.”

The trustee meeting included a luncheon honoring Clyde Meador and his wife Elaine. Meador retires May 13 after 41 years of service through IMB. Trustees also presented a resolution in appreciation for the Meadors’ service. Clyde Meador has worked closely with three IMB presidents as a top advisor and executive vice president, and even as the mission organization’s interim president from August 2010 to March 2011. He has served most recently as executive advisor to the president. See related story.

During the plenary session May 11, trustees also recognized Wanda Lee, who has announced her retirement by the end of this year after serving for 16 years as executive director of national Woman’s Missionary Union. Lee and her husband Larry are former IMB missionaries who were appointed in 1979 to the Windward Islands. The recognition included a gift of $15,000 from the IMB to The Wanda Lee Joy Fund, which benefits a solid financial foundation for the operational expenses of national WMU.

Platt also updated trustees that the final number of field personnel who accepted the board’s Hand Raising Opportunity (HRO) was 245. The initial number IMB reported in February was 281.

The next IMB trustee meeting is Aug. 23-24 in Richmond, with the next missionary appointment service Aug. 24.