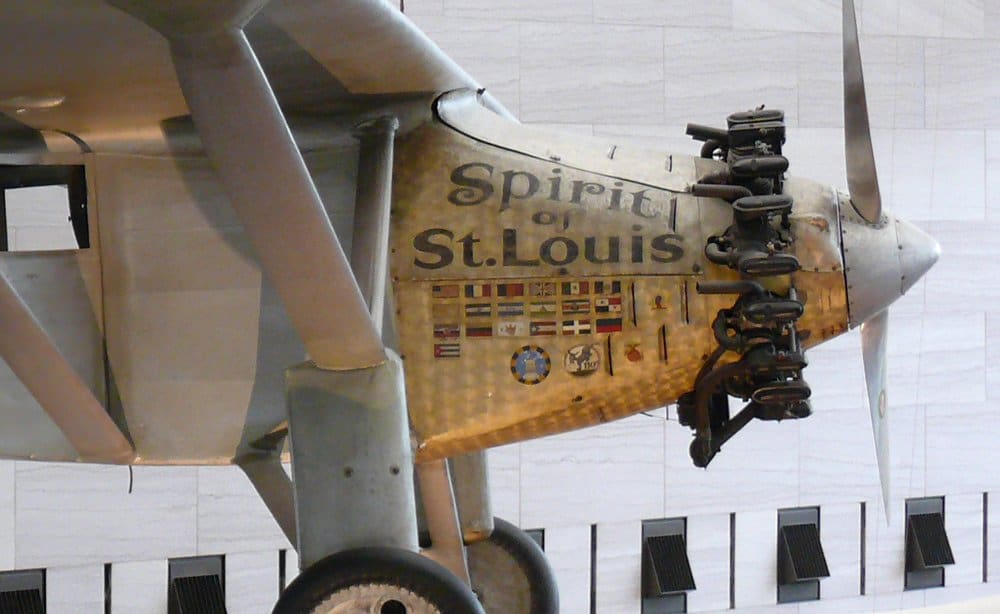 MAY 20, 1927, at 7:52am, one of the greatest feats in aviation began as 25-year-old Charles A. Lindbergh left Roosevelt Field in Long Island, New York, in his silver monoplane named The Spirit of St. Louis.Thirty-three and a half hours later he landed in Paris, completing the first solo flight across the Atlantic Ocean.Lindbergh was decorated by the president of France, the King of England and President Calvin Coolidge.The son of a Congressman, Charles Lindbergh was a test pilot for a St. Louis firm, performed feats of barnstorming and became an Air Service Reserve cadet, flying mail routes to Chicago.At the Institute of Aeronautical Sciences, February 1, 1954, Charles Lindbergh stated:“It was not the outer granduer of the Roman but the inner simplicity of the Christian that lived through the ages.”On the Bicentennial of Air and Space Flight, February 7, 1983, President Ronald Reagan said:“We Americans have always been at our best when we’ve faced challenge…Whether…Daniel Boone or Charles Lindbergh… I’ve always believed that mankind is capable of greatness… But it depends on us.God gave angels wings. He gave mankind dreams. And with His help, there’s no limit to what can be accomplished.”President Jimmy Carter stated MAY 20, 1977:“This year marks the 50th anniversary of the historic transatlantic flight of Charles A. Lindbergh.In his solo journey from New York to Paris on MAY 20, 1927, America’s “Lone Eagle” inaugurated a new age of aviation…Celebrated around the world, this momentous event established Lindbergh as one of our country’s most heroic figures.It symbolized the continuing devotion of our people to the exploration of new frontiers and demonstrated what can be accomplished when innovative and promising technology is guided by a courageous and determined man.Linking two continents, the 33 1/2-hour flight of the Spirit of St. Louis was a landmark in aviation history.”Phyllis Schlafly wrote in the book, The Power of the Positive Woman (NY: Arlington House Publishers, 1978):“Some Positive Women have nevertheless succeeded at this seemingly impossible task.Among those who come to mind is Anne Morrow Lindbergh, the wife of one of America’s 20th-century heroes, Charles Lindbergh, and mother of six children.During the 1930s, Anne Lindbergh earned a reputation as a flier and adventurer in her own right.She later became an extremely successful author.”President Gerald Ford remarked at the Fort McHenry National Monument in Baltimore, July 4, 1975:“We need to remind ourselves that America is really ‘the land of the free and the home of the brave.’ And we should be proud of it…The pioneer spirit…The Wright brothers mastered powered flight at Kitty Hawk. The age of flight was born.From the first Atlantic crossing by the ‘Lone Eagle,’ Charles Lindbergh, to the American astronauts who announced that the Eagle had landed, when touchdown on the Moon, America’s leadership was again established…The modern world places a premium on creativity and individuality… Individualism is a safeguard against the sameness of society.”President Ford continued:“A government too large and bureaucratic can stifle individual initiative by a frustrating statism.In America — and never forget it — our sovereign is the citizen…There is a quotation that I learned in my early days in Sunday school, that the beauty of Joseph’s coat is its many colors. And that is the strength of America…We are not Americans alone by birth or blood, by oath or creed…We are Americans because we deliberately chose to be one nation, indivisible, and for 199 years, with God’s help, we have gone forward together, and we will in the future.”