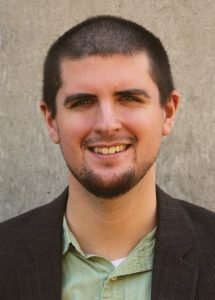 Kenny McCune, born Dec. 7, 1985, is the son of Kenneth and Shyre McCune. The younger of two children, he was raised in a Christian home with parents who served as missionaries and was saved in 1994 and baptized shortly thereafter.

McCune graduated from Southwest Baptist University in 2009 with a B.A. in Religious Studies and a minor in Philosophy. Since that time, he has gone on to serve various communications roles within the Missouri Baptist Convention, including web content specialist, social media manager, editor of mbConnect (the newsletter of Missouri Baptists) and interim webmaster.

In 2013, he became the webmaster and social media manager for The Pathway, and in 2014, his role was expanded to include print layout design. During his time with The Pathway, McCune has overseen a complete redesign of of The Pathway website (http://megaphonedesigns.com/~pathway), the upgrade of the website to a more advanced and mobile-friendly version, a complete redesign of The Pathway logo/nameplate, the development of a native iOS app and a greatly vitalized social media effort. As a result of this work, The Pathway has seen triple-digit percentage growth on its website and even larger gains in social media metrics. In 2015, the website was recognized by the Evangelical Press Association with an Award of Merit, and the app was placed second in the Baptist Communicators Association awards for best mobile application.

In addition to design work, McCune is actively involved in ministry and was ordained to the gospel ministry in 2013. McCune is married to his wife Jessie and is the father of three children: David (age 7), Miles (age 3) and EllaBeth (age 1).