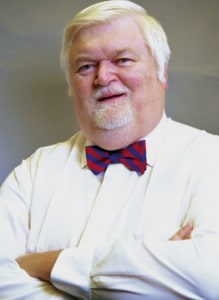 Don Hinkle, born Sept. 14, 1954, is the son of Cecelia and the late Tracy Hinkle. The oldest of three children, he is a 1972 graduate of Springfield High School, Springfield, Tenn., a small farming community 25 miles north of Nashville. A life-long Southern Baptist, he was saved and baptized at Grace Baptist Church, Springfield, in 1964.

Hinkle began his journalism career as a newsman for WDBL Radio in Springfield in 1975. He joined the U.S. Air Force in 1977, serving 10 years as a newspaper reporter, editor and consultant for two base newspapers and a major command news service (the former Tactical Air Command). He won the Thomas Jefferson Award in 1981 as the top news writer in the Department of Defense for his reporting of President Ronald Reagan’s firing of striking FAA air traffic controllers. His newspaper, The Skywrighter, the largest circulation newspaper in the Air Force, also won the Thomas Jefferson Award that year as the top newspaper in the Department of Defense. He was awarded the Air Force Meritorious Service Medal and was honorably discharged in January 1988, returning to his native hometown.

Hinkle continued his journalism career, working for three major metropolitan daily newspapers. He has been a sports writer and copy editor for The Daily Press of Hampton/Newport News, Va., a business reporter for The Tennessean in Nashville, and a sports writer and general assignment reporter for The Courier-Journal in Louisville, Ky. Most recently he was first, a business reporter, and then named editor of The Daily Herald in Columbia, Tenn. He is the author of a book on the Civil War, Embattled Banner, published in 1997.

A 1988 graduate of Christopher Newport University, Newport News, Va., with a bachelor of art’s degree in English, Hinkle was called by God into the Gospel ministry in 1996. He enrolled at The Southern Baptist Theological Seminary, Louisville, Ky., where he earned a master of art’s degree in Christian Education in May 1998. He was ordained into the Gospel ministry in August 1998. He earned a Master of Theology degree (ThM.) in May 2010.

Hinkle has also studied at the Acton Institute for the Study of Religion and Liberty, a conservative “think tank” in Grand Rapids, Mich., and the World (magazine) Journalism Institute in Charlotte, N.C.

He has worked as a news writer for Southern Seminary’s public relations department and has had articles published by LifeWay Christian Resources of the Southern Baptist Convention (SBC). He has been a national correspondent for Baptist Press, the official news service of the SBC.

Hinkle was named editor of The Pathway at its creation by the Missouri Baptist Convention Executive Board. The Pathway began as a Web site-only publication that was launched in June 2002. Since that time The Pathway has been a monthly newsletter before becoming a biweekly tabloid in January 2003. The Web version has already won awards for its design and The Pathway has become a respected and rapidly growing conservative voice within Missouri Baptist and Southern Baptist life.

Hinkle is married to the former Bernadette Guest, a retired registered nurse and graduate of the University of Louisville. The Hinkles are members of Concord Baptist Church in Jefferson City.