Benjamin Hawkins, born Feb. 11, 1983, is the son of Seth and Kim Hawkins. The fourth of 10 children, he is a 2001 graduate from Weatherford High School in Weatherford, Okla. Raised as a Southern Baptist, he publicly professed his faith in Christ through baptism—and later surrendered to a call to ministry—at Trinity Baptist Church in Weatherford.

Hawkins graduated from Southwestern Oklahoma State University in 2005 with a B.A. in Communication Arts and a minor in Spanish. Afterward, he moved to Fort Worth, Texas, where he earned an M.A. in Theology from Southwestern Baptist Theological Seminary in 2010. Also at Southwestern Seminary, he completed his Ph.D. in Church History and Historical Theology in 2017, with an emphasis in Reformation Studies. 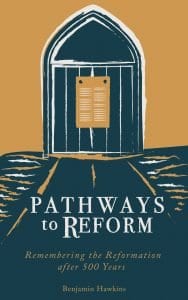 While attending seminary, Hawkins also served as senior news writer for the office of communications, where he wrote news and feature articles, as well as promotional content, for use online and in the Southwestern News magazine and other print publications. He also served for a time as an adjunct professor in the College at Southwestern, teaching history.

In Sept. 2013, Hawkins moved with his family to Jefferson City, to being serving as associate editor of The Pathway. Nine years later, after the death of The Pathway’s founding editor Don Hinkle on Sept. 22, 2022, he was named acting editor.

Alongside his editorial and writing duties at The Pathway, he also contributes to Baptist Press, to Focus on the Family’s Citizen magazine and to Focus on the Family magazine. He has also contributed to Midwestern Baptist Theological Seminary’s blog, For The Church (www.ftc.co). He is also an occasional proofreader for B&H Publishing and has taught courses in history and Bible at Midwestern Seminary and at Jefferson City’s Lighthouse Preparatory Academy.

Additionally, Hawkins is the author of Pathways to Reform: Remembering the Reformation after 500 years.To learn more about this book, published by the Missouri Baptist Convention in 2017, visit www.mobaptist.org/Reformation.

Hawkins was ordained to the gospel ministry in the fall of 2014 at Concord Baptist Church in Jefferson City.

Hawkins and his wife, Heather, have two children: Emma and Noah.