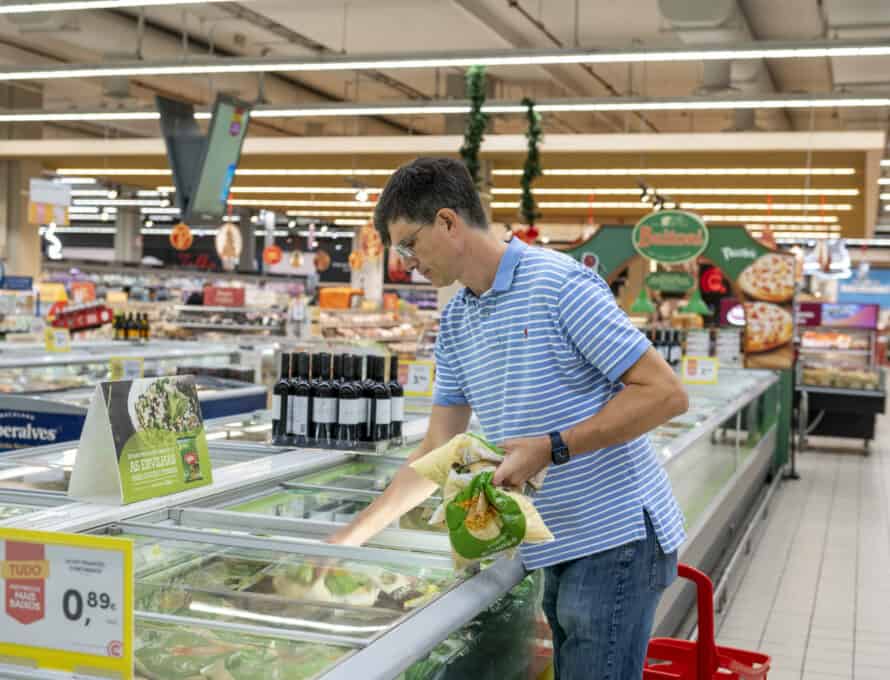 Global inflation is making a huge impact in many places where IMB missionaries live. Jonathon Sharp, missionary in Portugal, shops at a Lisbon grocery store in preparation for a volunteer team arriving from the United States. (IMB Photo)

RICHMOND, Va. (IMB) – Otis Newman opened the door and stared at the empty refrigerator. The kids rifled through the cabinets next to him. The family ate everything except dried goods before leaving for vacation.

The International Mission Board missionary cringed just thinking about how much it might cost to restock. Inflation has been a global hot topic for months. Experts try to predict how it will affect the economy, but for most people, it doesn’t hit home until they pay for groceries or utilities. For the Newman family living in Europe, restocking with the basics — milk, cereal, bread and lunch meat for a few days — cost 153 Euros, or $162.89

“When we first moved here a baguette cost 90 cents but now it’s Euro 1,20 ($1.26)…I look at these basics and know every bit of it comes from the generosity of others,” the veteran missionary said. “We are able to remain present among the lost because Southern Baptists, who are also experiencing an increased cost of living, continue to be generous and give [to the Lottie Moon offering].”

IMB president Paul Chitwood admits staggering inflation rates at home and around the world have created some significant financial challenges for Southern Baptist missionaries. Utility costs for missionaries in Europe skyrocketed, as have the cost of goods in many of the countries in North Africa and the Middle East. Lebanon’s inflation rate recently slowed to 158.46% from 162.47. In comparison, the United Statess inflation rate ended 2022 around 7.1%. Food in Lebanon has increased so much that residents talk more about the “food inflation” that peaked at 280%, making it more than $20 to buy a gallon of milk.

Thankfully, Southern Baptists are rising to meet the challenges of keeping missionaries on the field, no matter how inflation impacts different countries. Churches gave more generously through the 2021 Lottie Moon Christmas Offering® than any time in the IMB’s 177-year history. Every penny of the $203.7 million raised goes to missionaries on the field.

And every penny will be needed. The IMB has set a goal of increasing giving by 6% every year, just to keep up with inflation in ordinary years. The increase does not take into account the seasons of unpredicted global economic challenges, as the world has recently experienced. Even as prices soar, Southern Baptists remain committed to the primary missionary task.

“Our missionaries have gone to address the world’s greatest problem, the problem of spiritual lostness, with God’s solution, which is the gospel,” Chitwood said. “Without the presence of missionaries how will the lost hear the gospel?”

Sometimes this presence means putting missionaries in places that are expensive like the Middle East or France, where Kit and Stacy Klein live. They work with other IMB missionaries throughout Europe, the most lost continent on earth with less than 1% evangelical Christians.

“As an organization, the IMB prioritizes lostness and Europe is about as lost as it gets,” Kit said. “We want to help our neighbors see the greatest problem they face is not financial…it is being separated from God.”

Throughout these financial challenges, the Kleins walk alongside neighbors and friends. While they don’t face the same tough choices brought on by lost jobs, their family of seven has had to make cutbacks. They try to conserve gas by walking, taking public transport and riding their bikes. When utilities skyrocketed, they found ways to cut back on usage. The IMB also implemented a utilities supplement for those living in affected countries to help with the unexpected rise in costs.

The grocery bill, though, still proved to be one of the biggest increases in their family’s budget. With five growing kids, food disappears fast. As Stacy tried to stretch out meals, she discussed ways to use more beans and save money on groceries with other mothers in the neighborhood.

Shared experiences like these, Kit said, opens doors for spiritual conversations. Because the group of women shared ways to save money, it became a safe environment to talk about other things going on in their lives. One mother shared the burdens brought on by this economic crisis. Stacy offered to pray and was able to introduce Jesus’ love and compassion for the first time in their friendship.

“We are extremely grateful to Southern Baptist churches for continuing to give despite their own financially hard times,” Stacy said. “Our ability to be present among least reach peoples is invaluable.”

Some names have been changed for security reasons.