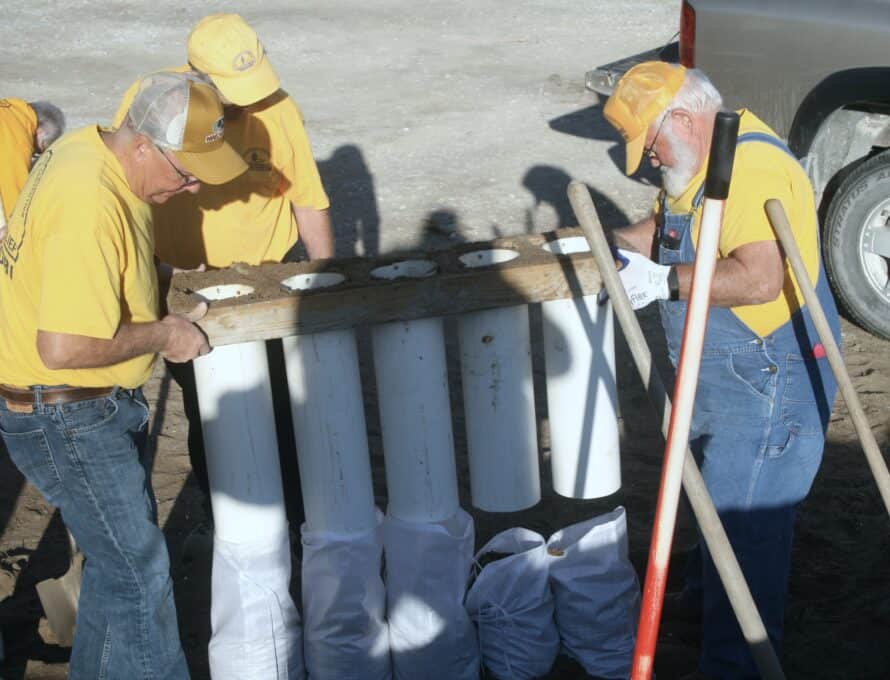 LAGRANGE – The Mississippi River was at significantly low levels on Saturday, Oct. 22. That didn’t stop one Missouri Baptist Disaster Relief (MODR) team from filling sandbags on the bluff a half-mile away from the river.

“Sand bags are being filled all over the state and stored inside. When there is a need, semis will be sent to pick them up,” she added.

The team used two frames of five PVC pipes each. Empty sandbags were put on the pipes, and the frames were flipped to be filled. The frames then were lifted when the bags were filled, each weighing about 35 pounds.

This is the second year the team has participated in the program. Temperatures in the 70s were a contrast from last year when the team had a covering of light snow on the sand.

“The Flood Fight program is intended to provide a quick supply of sandbags when the need arises.  It puts Missouri Baptists in action on the front end of a major flood.  However, the program is working better than we thought in that not one river flood has occurred in Missouri or surrounding states since we started,” MODR director Gaylon Moss said.

“We are thankful for the churches and associations supporting this effort. They have prepared over 3,000 bags ready to go when the time arises.”

“We have met our goal for now until a new rainy season sends us more floodwaters,” Moss said.

The ten included four pastors and members representing more than a half dozen churches in the association.